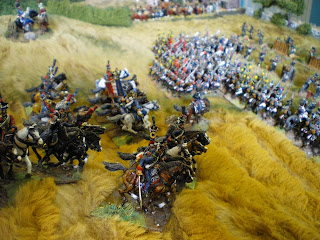 French 4th Hussars romp over the bunny fur
Spent the weekend up at Mr Landers' - The majority of which time was naturally passed in the shed, apart from the time in the pub, and being entertained by the viperish tongue and hospitality of his svelte other half. - Incredibly, we didn't actually manage to play a game, the time being spent in tidying up the shed, which was a tip after John's massive Arnhem efforts. So a happy time was enjoyed with John chucking stuff out and me dusting off (and I mean Dusting) the Napoleonics.
Having cleaned some up, I had to take a few photos (only about 200). Given that I reckon I only managed to clean about 15 to 20% of the assorted 25mm Napoleonics there is still work to do.

A lot of time was also spent discussing John's next possible demo game for Salute. Here is not the place for to steal any of his thunder but a picture is forming, both for the subject and innovative methods of displaying it. It promises to be as spectacular and as unique as we would expect from the absurdly high standards John sets for himself.
I did show John some of my latest 20mm stuff, though he remains suitably unimpressed, which is fair enough given that he's got it all already in 1/35th. However, one thing he did seem to like was my new bunny-fur terrain mat. This was an idea slavishly nicked off some other geezer here on the world-wide-inter-web, and it looks alright. There will be LOTS of pics of soldiers swarming all over it. 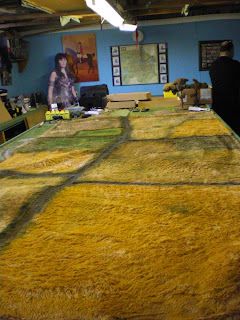 The bunny mat: Xena looks on approvingly, but John shows his back.

Anyway, we explored its possibilities and Lander has some ABSURD plans.
We like the way it "clinged" to the terrain beneath it and created a truly undulating effect, giving a real feel of hills and dips 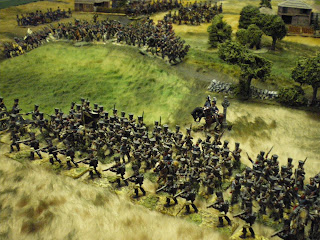 Prussian infantry enjoy the luxury of the bunny experience

Its relatively easy to produce, though colouring is quite difficult given the current dearth of decent spray paints in the UK at the moment (they have ALL been withdrawn, due to H&S...wankers). but with a bit of work, poster paints and a razor some good effects can be obtained. Might not be a universal future but it has possibilities.
Anyway, enough for now...More Napoleonics will follow in due course.
Posted by Chris Cornwell at 11/09/2008 09:46:00 pm

I've seen the fur mat thing before but not on such a large scale. I have to say it looks really good. Whats it like when you try to roll dice on it?

Absolutely rubbish to roll dice on, the first thing we discovered. For some games with fewer dice (John was interested in its Crossfire suitability) not too much of a problem, each player could just have 5 D6 in a plastic box 3 white and 2 different colours-to do various multiples and shake them there,,,easy...but for ITGM with its multiple types of dice and enormous number you would have to have a "rolling tray" or somesuch

Wow I really am impressed by the Fur mat. Did you say there is terrain under it? I assume this is your old boards!