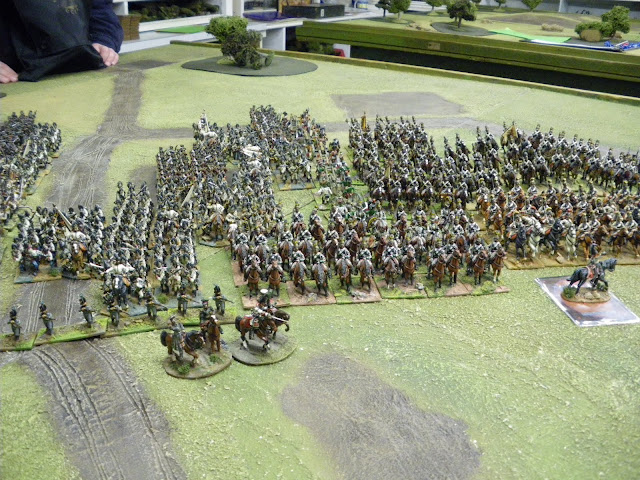 Austrian Grenadiers and Heavy Cavalry mass on the Austrian right flank at Wagram at the WHC before Christmas.

I have been very quiet over the holiday period, to the extent that I've had mails from one or two of you enquiring after my health!...Well, I'm fine. The flu bout lingered on for quite a while, then it was Christmas etc plus I had more work to do over the holiday than I'm used to, so I'm afraid putting in an appearance here slipped down the list of priorities.

On top of this, my gaming/painting/planning/blogging opportunities at this time of year always get pushed to one side in order to sort out planning for the forth-coming Falmouth Mega-game. Most of my time is spent reading some of the 900(!!!!) e-mails generated by this plus staring blankly at reams of OB's, rules, Maps, intel assesments/briefings etc etc. Plus reading up on this years' effort; the  1940 campaign.

Most of the preparations have now been completed, the first map moves made, the fiendish Hun has invaded brave little Belgium (and Holland), the first games have been decided, table maps sent out, player teams assembled, dice sharpened, the kick off is in a week's time down in Cornwall, providing everyone can get there in the snow. Hopefully the weather will have calmed down a bit by then.

The most important news however is that this afternoon I picked up a paintbrush again after a month's lay-off. I'm finishing off some Elite Austrians. I've now just got about 10 figures to finish for the first battlion of line infantry, so I PROMISE to get these done, and pics posted up before I go down to Falmouth in a weeks time. There. I've said it. Now I have to do it. 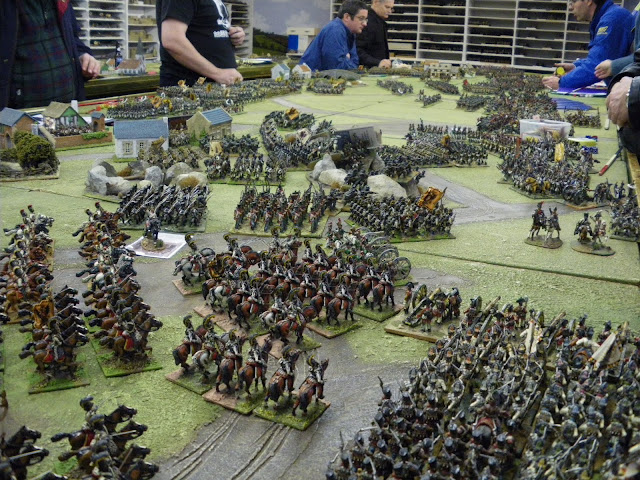 Rear view as the flank attack squeezes the French

So, a few catch up pictures from the Wagram game that was part of Herbert's birthday week at the beginning of December. I played on the Austrian right flank driving the Grenadiers and cavalry around the French left. The way Gerry handled this was for everyone to deploy normally (on movement tiles) and begin as normal. As each turn went by Napoleon would be informed that a formation had gone whizzing off table round to the left. Eventually an ADC made contact with the Emperor and the extent of the Austrian advance was made apparent. The French troops were moved back and a horde of Austrian cavalry and Grenadiers materealised on their flank. 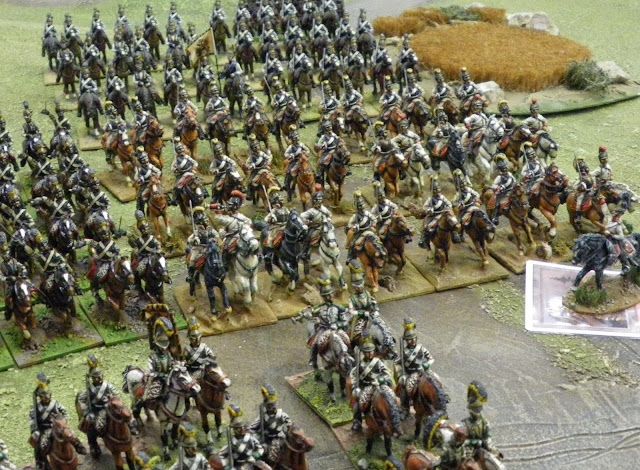 If my Austrian Cavalry turn out half as good as these, I'll be very happy. Figures from the WHC collection

The French had prepared for this and some 12 regts of heavy cavalry were dispatched to shore up the flank. This slowed down the Austrian advance, but like everything in ITGM it's all about combined arms, and the balance of infantry, cavalry and artillery slowly pushed the French back. Although they managed to mass their normally lethal heavy cavalry they just didn't have enough space to be fully effective. 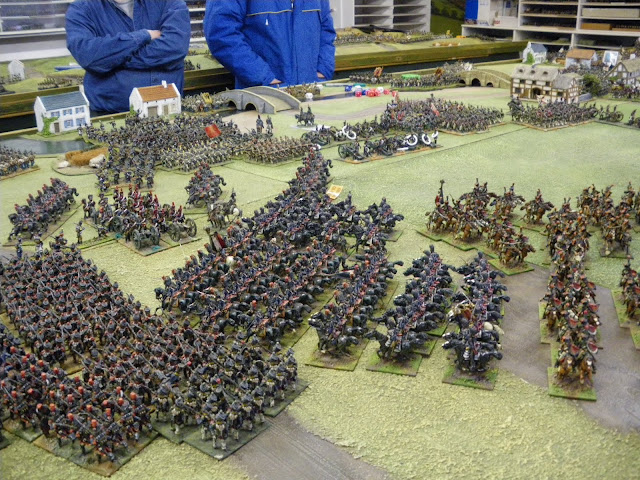 Wagram: The French Guard Heavies and infantry plough through towards Aderklar