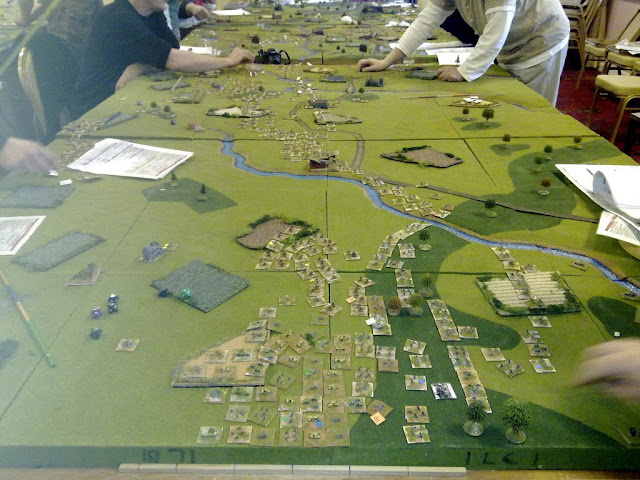 First Game for me: French Cavalry divisions eviscerate 2 German Motorised infantry Divs (pics courtesy of Phil Gray. More here: http://www.flickr.com/photos/dom_gamer/
As I mentioned I've spent a week down in Cornwall playing in the annual 1/285th Mega-Game. To be honest that was a large reason why I've not had much time since Christmas. However it's all over now.
Quite an intense gaming experience for those who are not familar with it; 30 players, + 3 umpires (there is a link here somewhere to Dom's rather crappy website), this year was France 1940 at platoon level. I confess I had serious misgivings about this game, the way it was set-up didn't encourage any conclusion other than a walk-over for the Germans- accurate, I grant you, but worth playing for a week? As it turned out my fears proved sufficently unfounded.  On the tables the Germans were inevitably vastly superior. Generally better troops, better at concentrating their armour, able to use combined arms with infantry and tanks, liberal air support, little pluses in firing, better morale, faster, longer ranged tank guns, considerably more flexible artillery, vast quantities of mortars and infantry guns, the initiative of attacking.....they had it all. Except...it didn't quite pan out as the Germans would have wished.
The German command team put a huge amount of effort into their plan, and I must admit I felt somewhat sorry for them, because in the end, it's pretty difficult to do better than the Germans did historically, or come up with something that will work better than the Ardennes attack. Subsequently, virtually everything they did had been foreseen by the allies to some degree, both in terms of deployment of the 60-odd divisions of kit, the whereabouts and direction of the 10 Pzr Divisions, and their overall strategy, and the operational mix of forces.
The allied plan was a bit of mess. Real life conspired against the allied command team, we lost the French CO to pressure of work, I got flu and very busy at a crucial period. There was no communication allowed between the French and the Belgians...In the end good old Gerry stepped into the breach, he came up with a plan in a couple of days...sit and wait on the Belgian border?? Oh no...Attack, attack attack!
This proved to be a wise decision, it meant that the Germans didn't get a free run at the Belgians, and that their spearheads were contacted close to the German border. This in turn meant serious traffic jams and disruption to their immaculately constructed schedule. For the most part the French attacks were swatted aside by the all- conquering panzers, but, we had worked out that within the time-frame of the game (3 x 2 day battles)  very few French formations would have to fight more than one action on the table. Not so for the Germans. By the application of some very rudimentary psychology it didn't take a genius to work out that Andrew and Phil (the German commanders) would load their pzr divs with assets and try to use them to fight all week. Why fight with boring old infantry divisions when you can play with sexy panzers? It's about the most rudimentary mistake to make as a German player at these games. I've played in 11 of these games now (gulp) and the thing I've realised is that its the German infantry which is their strength, not the Panzer divs. So, all week the German tank units were being driven hard, and winning, but the losses just mounted up. By the end of the week the umpires thought they had lost at least 50% of their armour strength, and 40% of the panzer infantry. Most of the tank losses were also on the good stuff -pzr III's and IV's and 38T's-  (the way the rules work one tends to fight with the best kit out front).
The Germans achieved the requisite breakthrough on the Meuse but the hole was a small one and the campaign ended with the spearheads fighting the copius French reserves. The BEF were happy and intact. Officially the campaign result was a draw, though both sides had reasons to be happy. 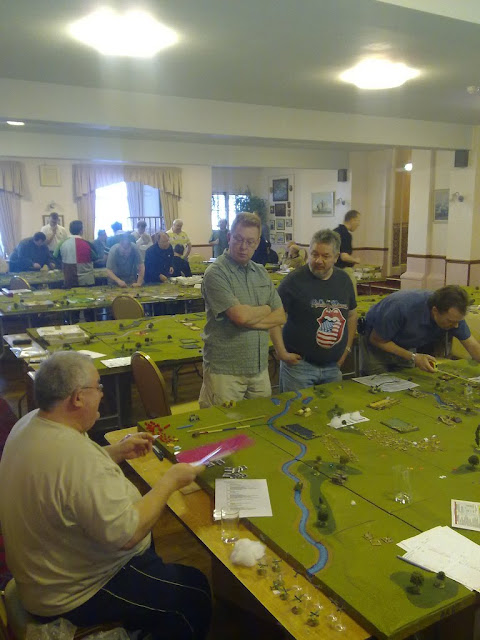 Incredibly rare photograph of Brendan with a ruleset in his hands (We still await the picture of him READING the rules).
Ultimately, the great thing was that I don't think there was really anyone on either side who was that bothered about the result. As a week long campaign it had been a huge success.
The scenario was designed by Tony Morphet (actually, COLONEL Morphet to you), and he wanted to pass on a little of his lifetime of experience of running a real army to us pitiful amateurs. One of the things he wanted to get across was how inflexible real armies are compared to how most wargamers percieve things. So, all the plans were submitted prior to the event. Armies and Corps were given areas of operations, and a general stance and that was it. The nitty-gritty of moving divisions around was left to the umpires. None of this "Oh, I'll just whip this division round through this little gap and wind up on this flank" which populates most wargamers thinking.  Questions were asked of army commanders at certain points, but on the whole both armies had to stick to their overall plan. (I think the Germans had a bit more flexibility).
The most important thing for me (and a lot of others) was that I had 3 really good 2 day games.
The first was an encounter game with 2 DLC's supported by a French Motorised division running headlong into 2 German Motorised infantry divisions supported by a leg outfit. We didn't know it at the time but it was one of the pivotal games of the campaign. The French objective was to cut a road used by the German spearheads for supply. If we had cut it, then the French might have won the campaign as it would have seriously impeded the leading panzers. We didn't quite make it, but we inflicted serios damage to the German units.
Game 2 was defending the Meuse Bridgeheads. Another DLC, a colonial division plus a dodgy "series B" division defending against 2 panzer divs plus a motorised division. I held the centre and hold it I did, always nice when things like your minefield and defensive fire-plan plus ATG traps all work, naturally the Germans penetrated elsewhere but they didn't get more than a small toehold over the river. A winning draw for the Germans.
Game 3 was a bit odd. A DLM plus 2 motorised infantry divisions (2 up, 1 back) fighting on a very narrow frontage against 2 leg infantry divisions. We battered ourslves against 2 vital hills and got shot to bits trying. Meanwhile the table suddenly got wider and a panzer div turned up on our flank! The .
DLM (commanded by Herbert, who else?)  turned to face the threat and...frankly, shot the Germans to bits. An entire panzer regt was destroyed. Day 2 saw the lead French regts being replaced by reserves and we did the job properly on the hills, finally taking them though losing 3 French regts to 2 German in the process. The game (and week) then ended which was a shame as this game could have easily gone on for a 3rd day.
All of these games went down to the wire, All were tough draws in the end. I can't recall the last time that happened at one of these mega-games. Normally you have a duff game at some point, or a day with relatively little action, or a dull day where you are either motoring through or getting ground into the dust. None of that. 3 really good, close, interesting battles with opponents who were a pleasure to play with (surely the most vital factor). So a big thank you to Eric, Adam, Tim and Paul. 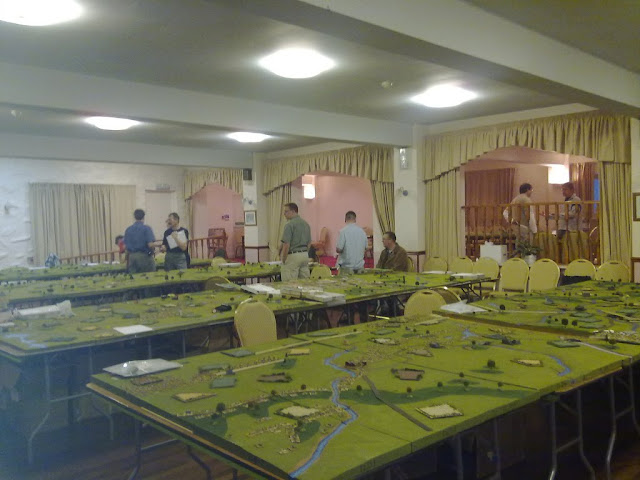 The set up before the first game: 5 x tables, 30 players, about 10,000 playing pieces
Next year there is talk of a scale change, and doing ALL of Market Garden at SECTION level...we shall see...Whatever is decided though, I know where I'll be next January.....Falmouth.