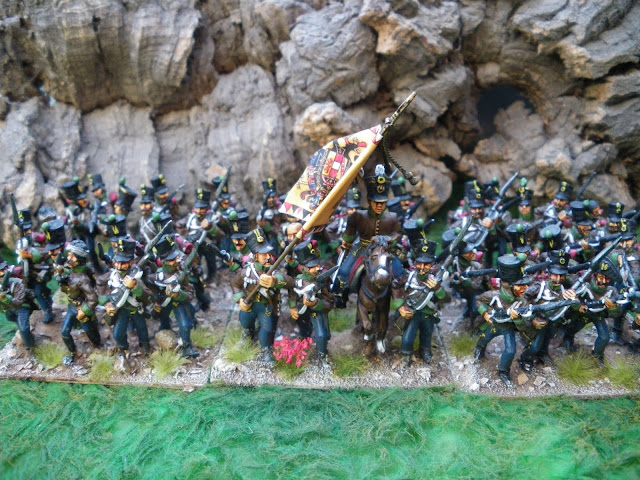 Grenzer Regt 16
This hasn't quite worked out. After putting up the pics yesterday which I wasn't too happy with, I thought I put up a couple more using natural daylight. For some reason these seem worse!
My  camera skills don't do these figures justice which is a bit annoying. They look a lot better in the flesh, but it seems you'll have to take my word for it.
The Grenzers are a right old mish-mash. Connoissuer, Elite, plus the standard bearer, mtd officer and a private are Front Rank. Firing Line heads on a few of the Connoissuer figs.I think the mix is fine 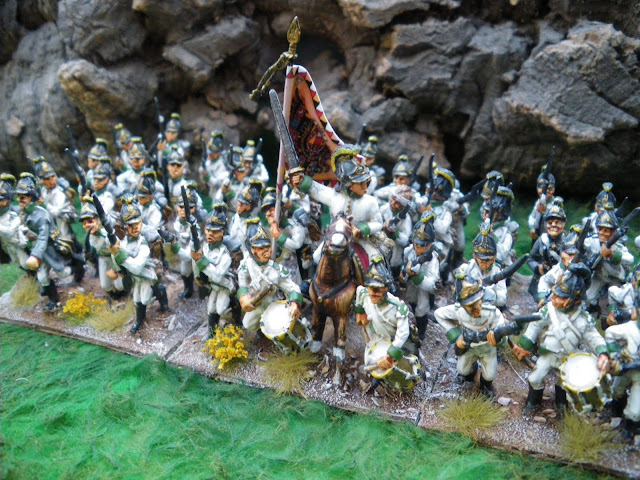 Close up of IR 9
IR 9 STILL has a pink flag! Well, believe me, its yellow. The Front officer on show, the paint job looks much better for real (sigh) . One thing I've noticed is that these figures have turned out REALLY matt....I have a theory that it might be to do with the Army Painter. More anon. 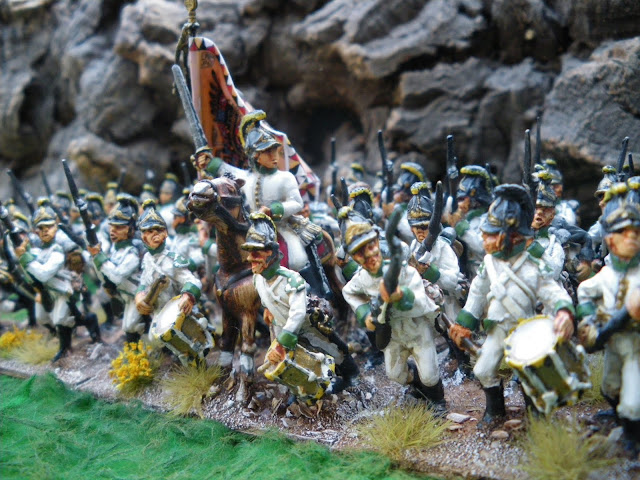 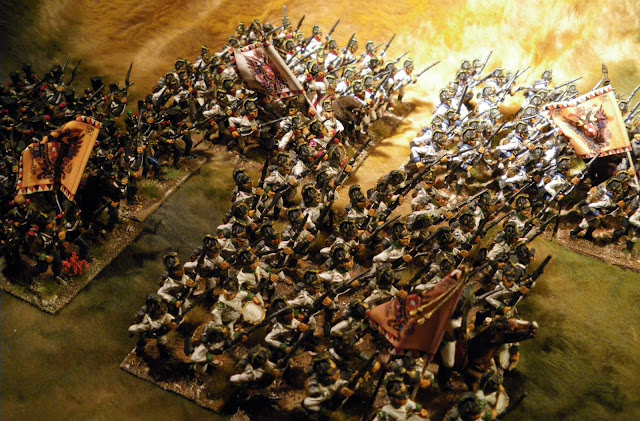 I have now finished 4 x 48's of the Austrians (+18 skirmishers), which I think is not bad going. I feel heartened to realise that this is about 20% of the line infantry done! Although that does mean a bit of selectivity in ignoring the small point of the grenadiers, cavalry and artillery, but it makes me feel better. I should wind up with about 16 x 48 of line  plus 4 x 48s of Grenzer, so I'm sticking with my 20%.
Considering thats about 2 months work which included a long period of doing no painting at all because of the Falmouth game I'm well chuffed. Even MORE so because in the last month I've also re-done the kitchen, laying a new oak floor, redoing most of the woodwork and re-decorating it. So, not only have I managed to get this done and keep up the painting, my Brownie-point quotiant with the missus is through the roof. 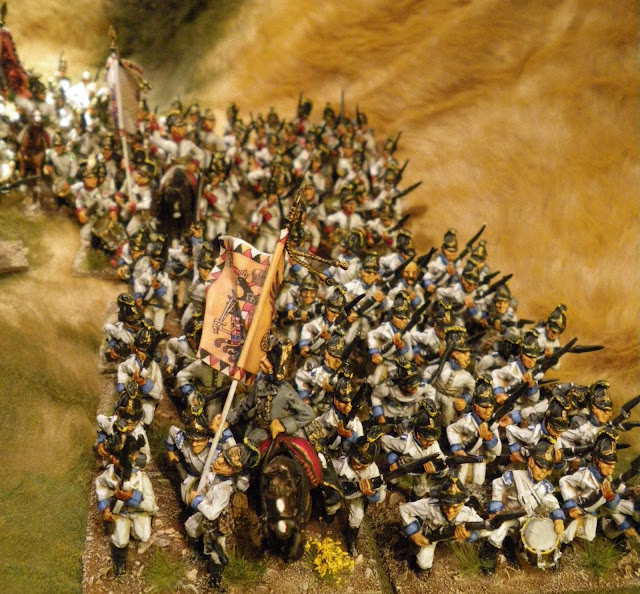 IR 4. "Hoch-und Deutschmeister
We also have a new tweak to the basing, in the above photo, you can see the addition of some little flowers which I couldn't resist from the Fredericus Rex catologue. I'd seen them on some other pics and liked it. I'm going to limit them to just one base per batallion (probably the command stand). I might bung some on Generals' bases etc. 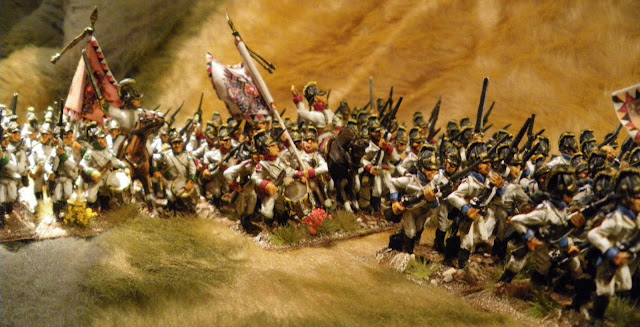 IR 4 in the lead, IR 1 behind and IR 9 on the flank
IR 9 (green facings) on the left in the above pic is a bit wierd, its flag has come out pink in all these pics!.In the flesh its a slightly paler yellow than normal which looks quite good and faded. Must be my terrible lighting.
I couldn't resist breaking a golden rule with this unit.: Mixing manufacturers. The mounted officer is a Front Rank figure,bunged in with the Elite masses. Personally I think there is a lot of cobblers talked about how "you can't possibly mix x with y". It might be true if you have 12 man units but in a batallion of 48 it really doesn't matter.
I really like Front Rank as a company. They make what wargamers want. They do well detailed figures which are very painter friendly, they still sell singly instead of ripping folk off with packs made for "ease of production" (profit). They charge sensible postage. Individually their figures are lovely. The trouble is, if you put more than about 6 of them together they look boring. I've no idea why.
Some of their ranges suffer from "stumpy musket" syndrome, and their horses are a bit horrid, but generally they are great figures. They just don't do it for me. I wish they did. I find them really easy and nice to paint. 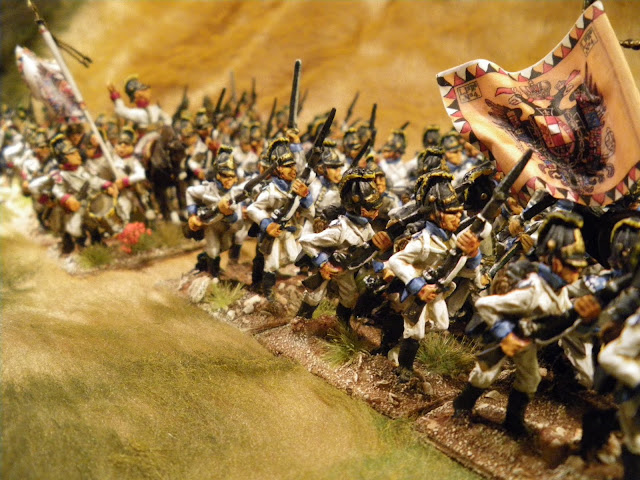 So, what next? I'm quite in the groove for doing the infantry, so I think I'll do 2 more 48's and finish some gunners and then I'll have a division of sorts, rather than pitch into the cavalry just yet. I might treat myself to a Hungarian regt next. Shakos rather than helmets which will make a bit of a change.

Little yellow flowers shown to good effect
Off up to Cambridge tomorrow to Lander's for the week-end (cashing in on my BP surplus) for a Crossfire game. I'll get in some Napoleonic phots too.
On a final note, I bought some paints from Net-Merchants this week. Brilliant service! Ordered them monday morning, they hit the door-mat on tuesday. I've never had anything but good news from this firm.Highly reccomended.

Elite Austrians base-coated white with light tone Army Painter brushed on
Heres a quick run down on the latest version of my white painting technique. I've never been that happy painting white, I think this is a pretty common affliction amongst figure painters. Embarking on this Austrian project meant I had to sort this out. I'm getting there. I'm still not 100% satisfied but this version seems reasonable plus it's quite quick which is another all important factor.

Next step: The figures are dry-brushed with Vallejo "Grey white No.993
I kicked off with my usual undercoat of white from Halfords, before brushing all the relevant white bits with Army Painter Light Tone. I was quite generous with this, but if it pooled too much I spread it around a bit before it dried. Drying takes a while, probably at least 2 hours, if you are of a cautious nature then double that.

Final white highlights were Vallejo Ivory No.918, followed by "normal"  white No.951.
Once the base white was sorted out I painted the figures as normal, blocking in the black on the helmet, boots, musket, cartouche and bayonet scabbard, then highlighting the musket in gunmetal and the black bits in German Grey. A tan base coat on the backpack, A dark brown on the musket, and a wash of Paines' Grey oils on the greatcoat. Block in the flesh, then the base of the facings; in this case "Gunship Green".
Then I washed the flesh with Burnt Sienna oils and the backpack and waterbottle with Burnt Umber oils.
Then a highlight for the facings in German Camo bright green, this needs a couple of thin wases sometimes to give it a bit of depth.

The greatcoat was picked out in neutral grey and the helmet given a quick dry-brush in the same to pick out the detail. Then the yellow crest was dotted on, and the musket highlighted in a light brown, the water-bottle was washed over with a Windsor&Newton brown ink and the flesh highlights done. Gold bits picked out. and Steel on the musket re-touched 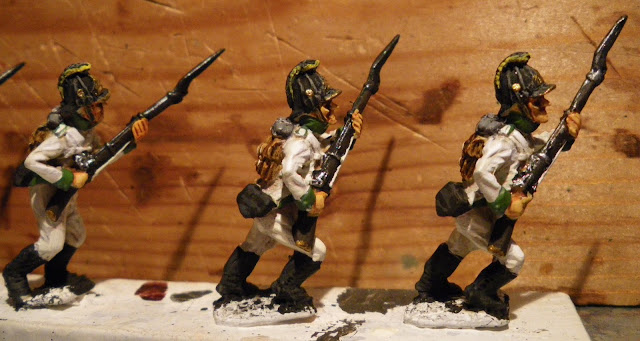 Finally the white highlights were done, first in Ivory and then an additional highlight in White. A matt artists varnish brushed on and thats about it.
Like I said, There are plenty of people who achieve better results than this out there, but with over 1,000 infantry to paint  time is a factor here. Whole thing from soup to nuts was about 4 hours for 15 figures (excluding the Army Painter drying time, in this case overnight). This is a sort of managable number for me. 3 approximate batches like this and I get a 48 man unit. These go into the box with the first 24 so I only have about 8 command figures to finish the unit. Then I think we might have a little parade of the first 4 btns!