A few landmarks of sorts 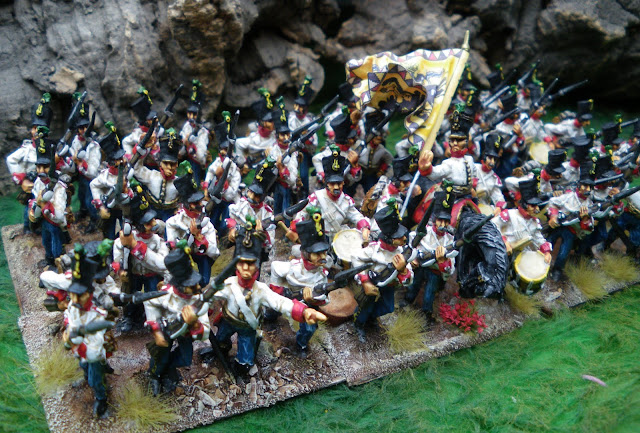 The latest addition to the Austrian army: IR 37
The last couple of weeks have seen a few slightly notable points of interest.
First off, it was my birthday recently. Now once upon a time, birthdays meant wargaming related presents. That doesn't seem to happen as you get older. So any wagaming stuff has to be a "self-present", which is actually FAR better anyway, because you actually get what you want (not that I've ever really needed an excuse to spend money on wargaming). Also, getting older usually means you have more money, so, unless you are going to have a mid-life crisis and spend it on impressionable young women, you get some excellent "self-presents".
With all this in mind, I ended up in Foyles the other day (as opposed to one of those seedy basement clubs a few yards away in Soho..see "impressionable young women" above), where I spent a happy evening perusing the shelves in the silence you only get in bookshops. Three of the books I bought were ones I probably "should" have bought ages ago and just haven't got round to, a couple of the others were more impulsive.
First off, I got hold of the second and third volumes of "Thunder on the Danube" by Jack Gill. These are pretty much indispensible for anyone interested in the Austrians, particularly if you are leaning towards 1809 as I am. So they were long overdue. I've only dipped into them so far but they promise to be everything all the gushing praise I've heard for them  has suggested. Looking forwards to reading them. 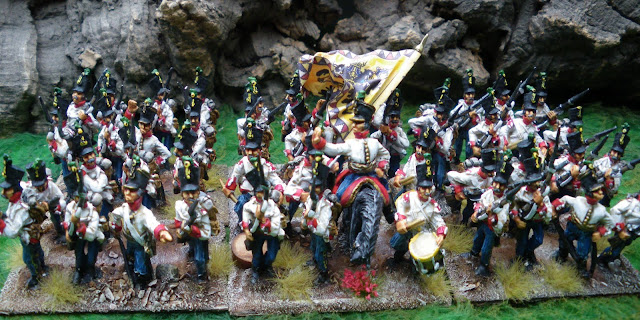 More IR 37. Less pose variation than in the German regts, but plenty nonetheless
The third book I bought is Adkin's "Waterloo Companion". Now, I've only a moderate interest in the Waterloo campaign. It has always seemed a bit of an aberration to me in the terms of the Napoleonic wars overall. So much has been written about it, and so many people (wargamers) base their entire impression of how Napoleonic warfare worked upon the way this battle (and campaign) was conducted, when so much about it is highly a-typical rather than representative of Napoleonic battles. Anyway, thats a bigger subject than I've got room for here.
That does nothing to change the fact That Adkin's book is brilliant. Packed with all sorts of detail, some of which anyone who has boned up on the battle will be familar with, some less so. The text is nice, full OB detail which corrects a few errors found elsewhere, some really lovely original colour uniform drawings, Highlights of the battle rather than a full narrative, and for me, the real winner, is some brilliant maps and detailed deployment diagrams. It really helped me understand a lot more about the battle, especially in terms of time and space. There is a lot there even for someone not that interested in Waterloo
The other 2 impulse purchases were the 2 slimline "men and battles" series from Histoire & Collections: "Hanau and Montmirail" and "1809, Essling".
Both of these are great little books. They sort of out-Osprey, Osprey if you see what I mean, same money, not brilliantly translated text, but excellent diagrams, a few contempory drawings I've not seen before, LOTS of full colour, detailed OB, and a few pages of "Beano annual" style uniform drawings.
(If every Osprey was as good as this they might be worth the money). 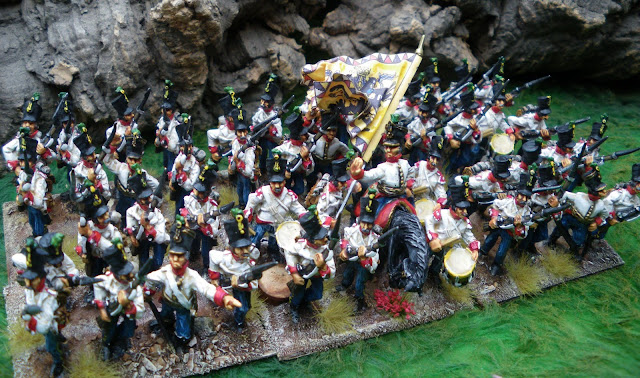 Painting Shakoes makes a nice change from helmets!
Other Landmarks recently are the passing of 500 figures painted so far for the year! Which is brilliant, because it means I'm bang on target for 1,000 by Christmas. The most recent additions are pictured here- Hungarian infantry. Less pose variation than the Elite Germans, but they still have plenty. I tried a slightly different white technique (through forgetfulness more than anything else), but they turned out fine. I just did Spray white, Army Painter and then Highlight white rather than add another off-white shade after the AP. It makes them a little brighter, but not that much.
Finally, I have had over 50,000 visitors to this little site. Which is ...extraordinary really... Thank you all very much for being interested in my little wargaming world...but, you really should get out more.