Grenzer regts 16 and 17
So, June quickly draws to a close, not a bad month in the world of Austrians, despite a crippling work schedule (Sir Elton John and Lady Ga-Ga being demanding souls), nonetheless, I got over 90 figures whacked off. This included finishing the second 48 of Grenzer. This means I now have 96 of these critters, all with green facings. Subsquently I can use them either as 2 x 48 man units or as 3 x 32's which is some nice flexibility. Eventually I will add another 2 x 48, so will be able to field 4 x 48 or 6 x 32!
32 man Grenze units are pretty weak in ITGM, which seems accurate.They fight and morale as militia - i.e only plus 1 for morale but they do fire as if they are veteran. So 48's can be a bit pokey in the right circumstances  (sat in a village is always a favourite) They are still a bit hopeless in woods though (move as militia) which doesn't seem quite right. I might need to think about this. 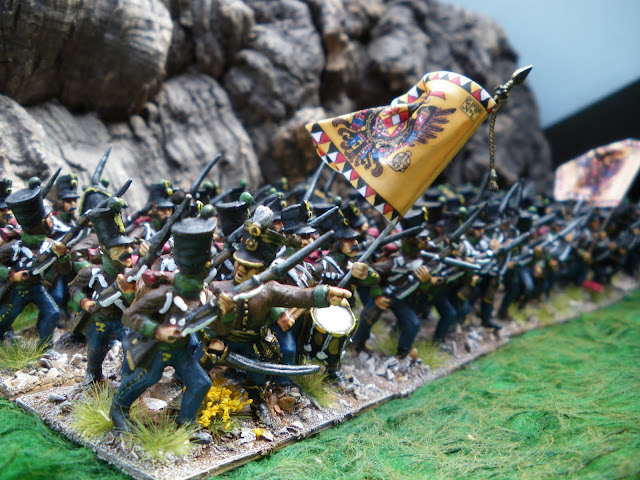 Front Rank officer throwing his weight around with his slimmer Connoissuer squaddies
I'm going back on track with painting line infantry next, this will be the seventh German btn, probably with pale grey facings. The first batch have just been undercoated and are awaiting the old Army Painter treatment.
After six months of not buying (m)any Napoleonic figures my purchasing gland has been getting twitchy. I've been checking out the Sash and Sabre range- I've got some samples on order from Old Glory UK, command for both line and grenadiers. Even if they are not quite what I'm after I'm sure they can be shoe'd into a unit somewhere. I'm over halfway with the line infantry, and will wind up with 16 btns of Germs and Hungarians....but it doesn't seem QUITE enough...so maybe a division of the S&S chaps would round off my army nicely. We'll see. 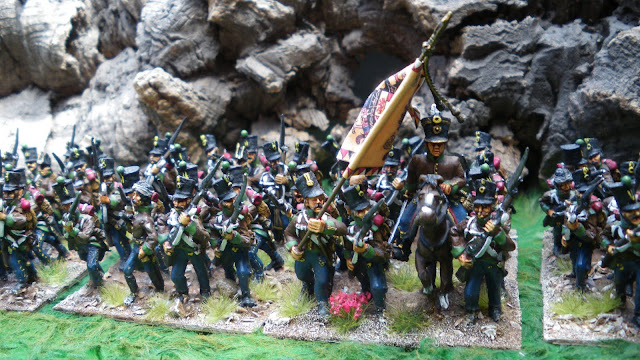 FR command, Connoiseur and Elite make up the rest
The other Company I've been looking at are Alban. While I like their infantry a lot, I don't think they will fit very well with the massed Elite units, which is a shame. However, the hussars they make look fabulous, and I don't think a cavalry unit will present the same asthetic problems. I don't have any Hussar figures yet at all (that may change very rapidly) but Austrians really should have plenty. I'd like to wind up with 3 units, and I might make them 48 man regts.

3 x 32 or 2 x 48...the choice is mine
Saddened to hear of the death of Paddy Griffith, I re-read his "Forwards into battle" recently. A fairly seminal work IMHO, one of those books that upset a few folk because it challenged the way they LIKED to think warfare was conducted, and arrived at conclusions which weren't cosy with their view. Part of what good historian should do.