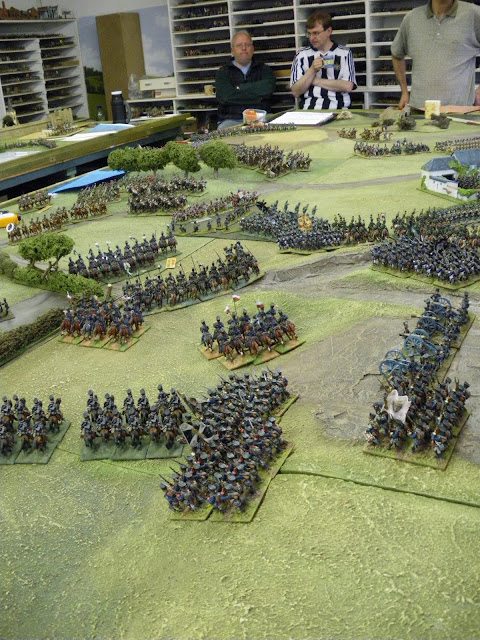 The Allied right early in the game. Looks reasonably secure at this point.
So to continue the narrative of last weekend, we carried on with the made-up (before you all go Google-crazy) battle of Goerlitz. This is what I call a "Mike reinforcing" battle. (at least, I assume it is one of Ingham's). Mike does like to design scenarios where one or often both sides receive their reinforcements gradually throughout the battle, usually on a simple die-roll (turn number + 3 average die), and coming on to the table at pre-designated entry points. This means (horror of horrors!) that wargamers actually have to come up with a plan in advance, and then pretty much stick to it. It's one of the strengths of the vastness of the holiday centres' table. Its no use deciding to bring on a formation in one area of the battle and then attempt to march it (even with tactical moves) from one end of the table to the other. It will rarely get there.
Decide where it's going, decide what it's job is, decide what happens after that (amazing how many wargamers are utterly incapable of this).
Anyway, down below are the respective OB's - many apologies but I don't have a map. 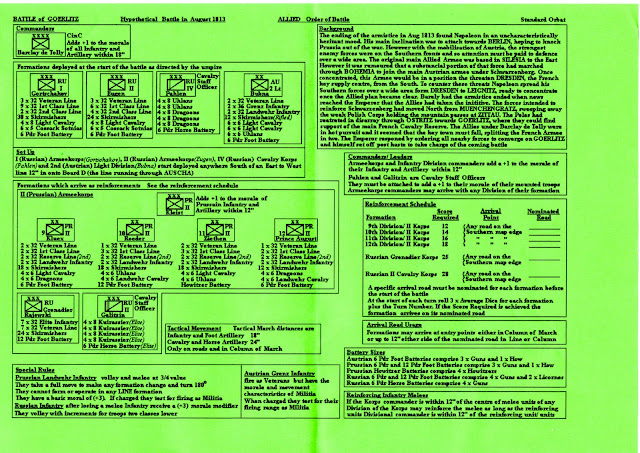 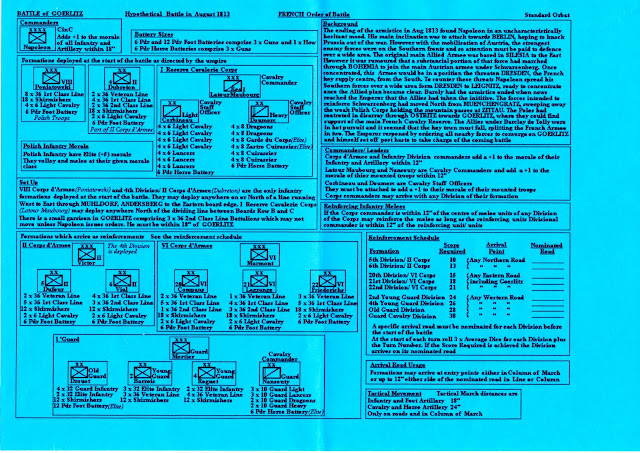 French OB
The French therefore had a mountain of cavalry (15 regts!) and hardly any infantry (a paltry 16 btns) on the table to begin with. The allies could muster a 2 to 1 advantage in infantry and almost parity in numbers of cavalry figures(though not in regts/sqdns). The French did have the advantage of a reasonable defensive line. A large sector of their front was covered by hedges and woods which would prevent the Allies from pushing forwards quickly, and they controlled 3 key villages. The central one was on a hill and dominated proceedings, particularly the road net in the sector where the Russian Guard infantry would eventually appear. So this had to be cleared in good time to allow some of the key re-inforcements to move up.
It was garrisoned by the Polish infantry division, just 8 btns, a hussar regt and a battery. The infantry were a bit good though, for although they moved and fired as line (+3), they tested morale as if they were all elite (+5). Tough little critters.
I was up against this with 14 ropey old Russian btns, a light cavalry regt and a big old Russian 6 pdr battery.
In the event it was a really tough fight. 4 Russian btns went right with half the skirmishers to clear a wood with just a single Polish btn in it, the outcome of this was rarely in doubt but it slowed me down a little which I'm sure was the general idea.
Around the village the Russian battery engaged the French in counter-battery fire and the French quickly realised they were on a loser and retired out of sight of the Russian battery which then switched it's fire to the village and the units around it in support. It did sterling work! and inflicted hefty losses on the Poles. Not that they seemed to care. Even with the infantry testing as Elite, Nick blithly rolled high roll after high roll for their morale tests. After about 8 or 9 turns I got the Russian attack against the village set up. It should have been a walkover, and in some ways it was. I had 8 btns going in against just 4 Polish, and I won all 3 melee phases, the Poles were well and truly stuffed. Naturaly they just passed morale meaning I bounced ... 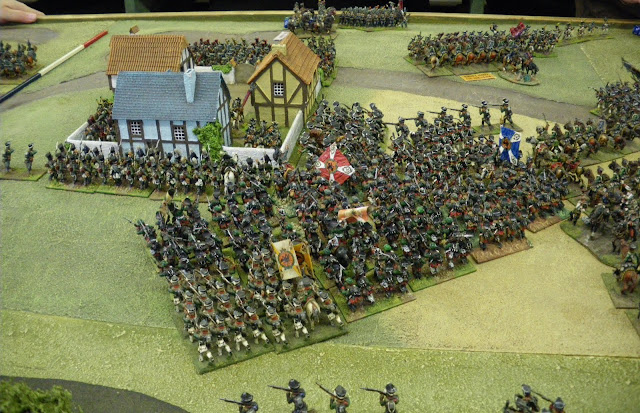 My first attack against the Polish held village, after a massive morale roll, the Poles held, but the losses they had taken in the process meant they couldn't stand for long.
This was the begining of the end for the Polish division, as the 4 units which has defende the village were thoroughly exhausted, being almost at 50% strength. I had 2 units badly damaged, and 3 more with minor losses. A few more turns saw the rest of the Polish division eliminated as they made a series of brave but piece-meal attacks.
Elsewhere the Prussians were arriving and were embroiled in fighting over the hedgerows, on the extreme left the other Russian corps was pushing forwards supported by the Russian cavalry corps which was destroying any French cavalry in it's path. 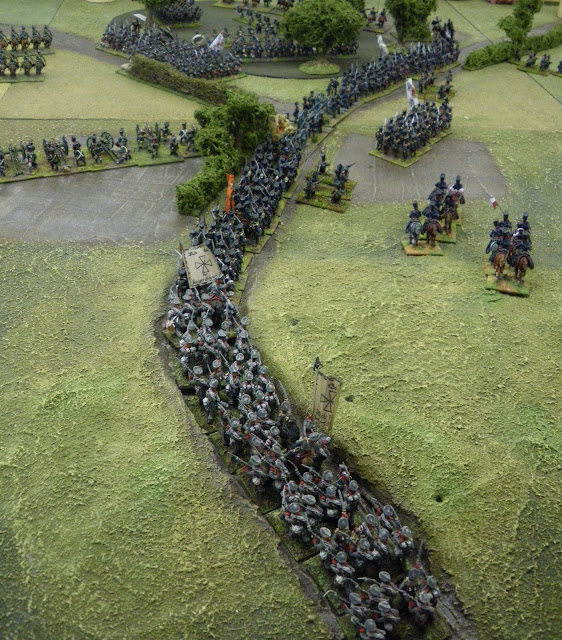 Prussian columns move up in the Allied centre, the wood in the top of the picture finally having been cleared of pesky Poles
Then the French started arriving in numbers. However, they all turned up on the flanks! division after division. I had pushed my cossacks forwards in a smart-ass move to sit on the roads I just KNEW the French reinforcements would arrive on in order to strengthen their (now destroyed)
centre. They never appeared, just more and more on the western and eastern edges. They were inexorably pushing back on the eastern flank, despite the Prussian's best efforts, having beaten off the French to their front. The Russians on the western flank told a similar story, with the French guard now lined up against them. 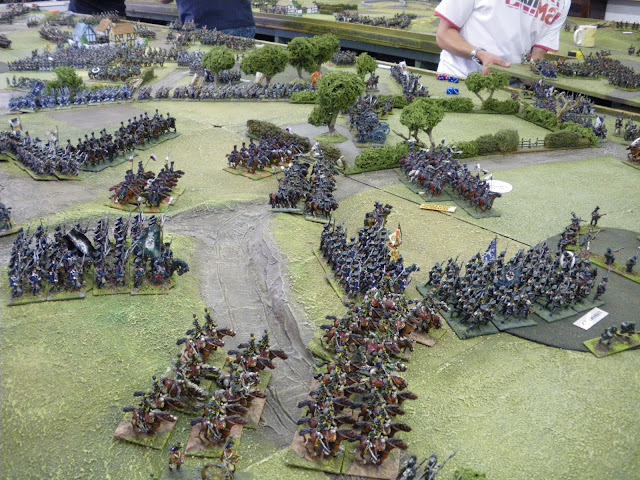 The "Polish" village in the top left, Prussians advancing in the centre, relieving the Austrian advanced guard in the foreground. French infantry move up to (temporarily) occupy the hedgerows
In the centre the Russian guard infantry had streamed into the gap left by the Poles, and lined up alongside Pahlen's victorious cavalry. There was a brisk, one-sided fight as the Russians mopped up 4 btns who were  still in their sector. They settled down (supported by 3 batteries) to await the French Guard.
The Russian reserve cavalry appeared on the left but never really got going while it's front was covered in routers from Eugen's corps. That was the situation at turn 26 (not bad going) when the game ended. As for the result?
I'm not sure..drawish erring on the side of the French, but at a massive cost.
. Although the French were in a slightly better position they had incurred enormous casualties, both in infantry and cavalry. All in all a fine game and a great week-end.
There is one more thing I need to tell you about the weekend, avid readers here will recall I was intending to purchase a few figures from Mike..this I did,  but that will have wait for a few days, when I will have pictures aplenty. 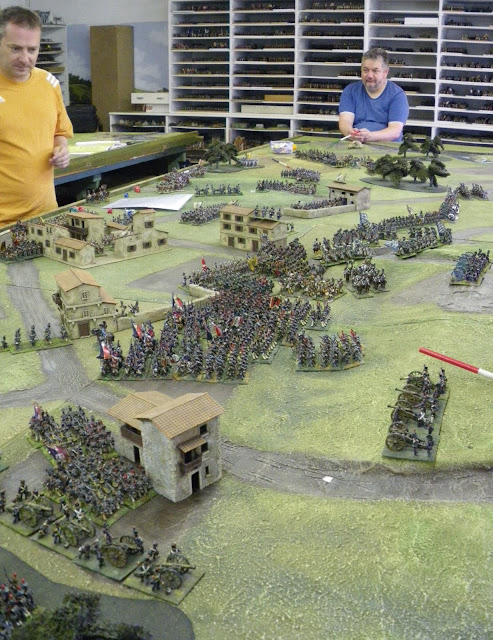 The view back over the French centre and right flank. Dom looks thoughtful, Gerry, errr...doesn't.
Last thursday saw me making the familar trip up to Scarborough to the WHC, this was to be a long weekend with 2 games on offer. The plan was to get there for about 2.00pm for a Corunna(ish) scenario which was to play until Friday afternoon, then once a few more people had arrived,  change over for a fictitious 1813 bash which could accomodate more players. As it was, the Peninsular game still had 10 players, so the players each had relatively small commands and the game played quite quickly and smoothly.
I played on the French left and was tasked with taking one of 2 villages which dominated the road network which the British needed in order to get to the waiting arms of the RN.
This probably proved easier than it should have done, my opponent had racked up 8 or 9 battalions behind the village, including some fairly choice kit, a couple of guards batallions and 2 big Scots units. As it was he would have been better off spreading out a bit more. What transpired was that both myself and Eric on my right flanked the village rather than assault it directly. Due to the lack of troops on the flanks we were able to easily penetrate the defences which on my flank consisted mainly of a solitary highland btn. A punchy unit, and if it had had a couple of mates quite capable of putting up a stiff fight. On its own however, it was easily brushed aside. The end result was that the British behind the village were caught in a crossfire from myself and Eric, with units being continually pinned by retreating units in front of them.
Rule number 1 in ITGM:
Space Management! 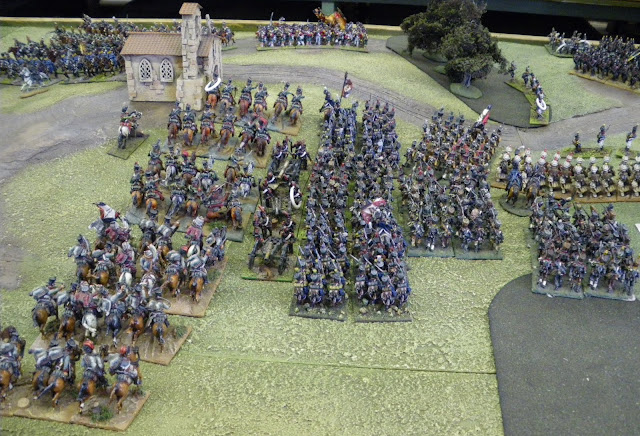 Part of my division attempts to outflank "my" village, which is out of shot to the right of the picture
In the end, it was a fairly comfortable and total French Victory (contrary to Noel's verdict  here:  http://garagegamer.blogspot.com/ ) Although his perspective might be coloured because he was on the extreme flank of the British with the Light Division, which he handled with considerable expertise. Unfortunately I think his troops would have been the only part of the British army to get away. The rest were cut off. 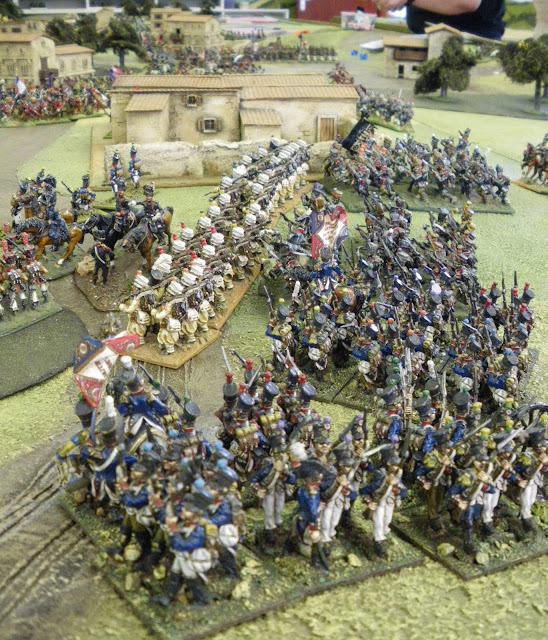 "My" village in the background, successfully outflanked. The British driven out, and are now being pushed back to the left of the picture.
None-the less, it was great start to the weekend (I don't recall talking to my dice AT ALL...I think I am being horribly misrepresented!), and got everyone in the mood for the main event which was a larger 1813 game; Goerlitz. We started the game on friday afternoon and got a few turns in without getting into serious contact before packing up for the day. After a couple of extra arrivals (and a night in the casino), and we were ready to go on saturday morning....to be continued