GMB Versus The Flag Dude

May has been a poor month for painting as I remarked last week, although things picked up in the last couple of days and I managed to up the number to 48 which was another German Infantry batallion, this time IR 63.
So not too bad, this means I'm still just about on course for 1,000 figures for the year providing I don't have too many more months like this.
A tiny difference between this unit and all my previous line infantry is that these fellows have a standard from The Flag Dude. I saw these at Salute and couldn't resist buying a couple. They are actually 7 years War standards but giving the "scrunching" its somewhat impossible to tell the difference, and, lets face it, if I hadn't mentioned this, you'd have never known. 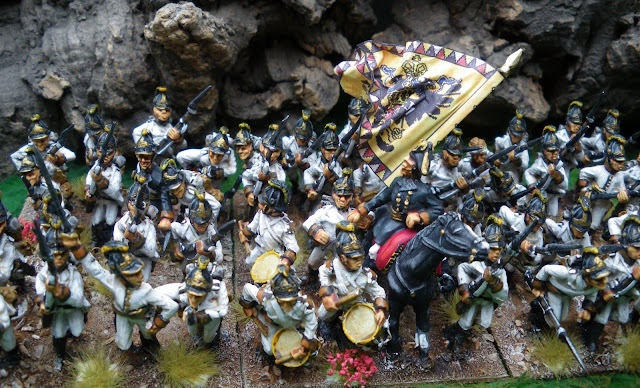 IR63 Bianchi, sporting a Flag Dude standard
To be honest, trying to compare the 2 is a bit like asking which footballer would you prefer in your pub team, Wayne Rooney or Lionel Messi? Both companies are brilliant and worlds apart from anything one could produce for oneself, the quality of both is so incredibly high. Particularly given their relative cheapness.
Which gives us our first comparison. FD are £3.00 each while GMB are £3.50 for 2. With GMB you have to cost in the finial and staff which adds a bit over a quid for 2  flags so the cost is actually about the same(ish)...buttons really either way considering the effect.
Obviously the big initial attraction the FD is that everything is done for you, and done very nicely. Flag is "scrunched" rather attractively (though probably not realistically), The finial is included and the flag is attached to a lengthy staff,in fact the only thing that needs to be done is to trim this to a desired length and paint it.
With GMB you do have to do a tiny bit of work.
The pole  needs to have its finial attached, and then the flag glued to the pole. My prefered method for this is to cut the flag out, fold it so its creased centrally around the pole before "dry fitting" it. Only then smear PVA glue over the inner surface of one half of the flag before folding in and lining the flag up as neatly as possible. At this point a bit of scrunching can take place. I always try and do it to expose as much of the detail of the flag as possible (otherwise, whats the point?). Then leave it for a couple of hours before giving it a few thin coats of brushed on gloss varnish to stiffen it. Finally give it a coat of matt (or not, depending on taste). 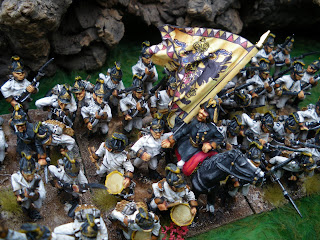 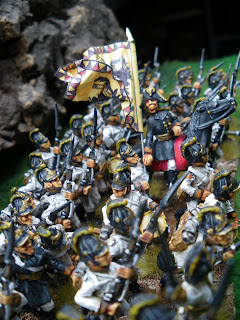 More IR63. Custom "scrunching"
The final analysis comes in the detail. The printing on the GMB stuff is slightly better, and their finish a little bit finer. Also the colours on these Austrian flags is a little more vibrant.
I can't comment on how this is with other periods. One nice thing is that the ranges are somewhat complimentary, there are items that each company do which the other doesn't. 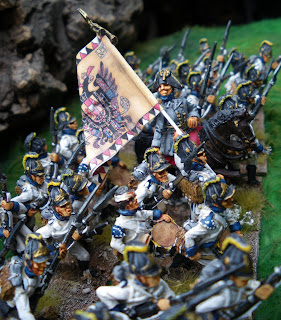 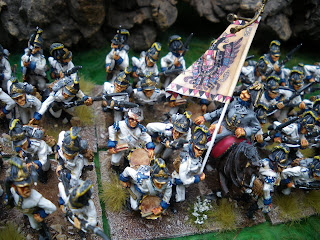 I.R.24 Baron Strauch. Proud of their GMB flag
Oddly,  the deciding factor for me is the fact that the GMB flags aren't the finished article which FD are.
The reason for this is that with GMB I glue the standard with the finial to the figure before priming. So all painting and handling takes place with a bare standard pole, but one which is firmly glued on bare metal with the glue painted over. Then, when the figure is completely finished and varnished I attach the flag as outlined above. 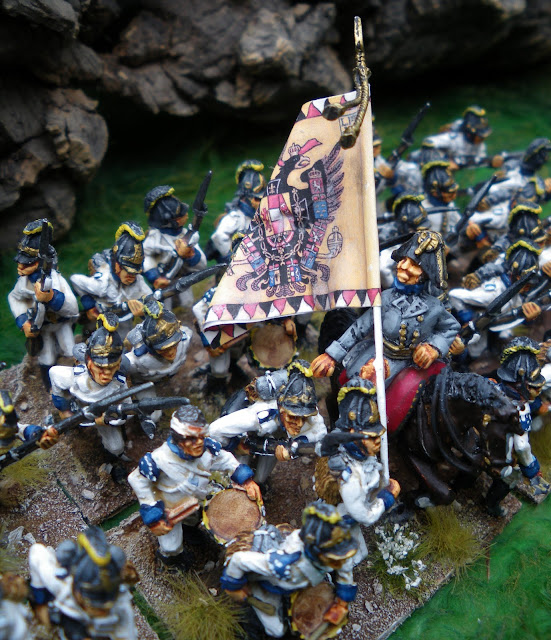 More GMB.
With FD flags this isn't possible. Because the flag is all done you can't attach it until after the figure is finished. One could prime the figure and then attach the flag, but this would mean having a great big flag flapping about (ok,not actually flapping but you know what I mean) while painting the standard bearer which I'm not that keen on. Subsquently, I ended up gluing on the FD flag once the figure was finished and then varnishing over the glue. Not ideal.
So, for me, GMB has it. Just.