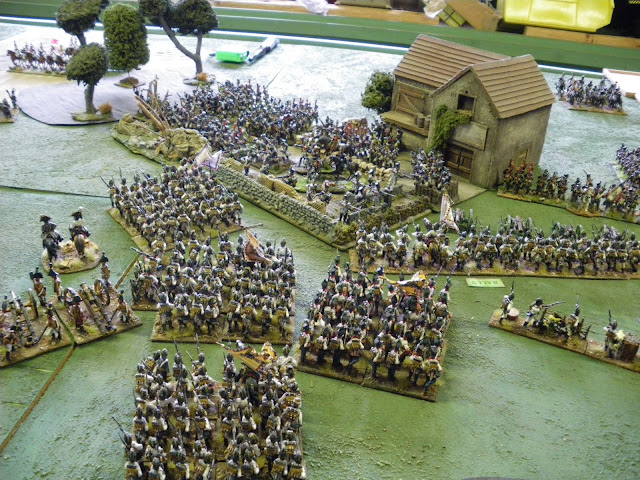 Things start to go wrong on the Austrian right- the line is in the process of being shot to bits
I slipped up to Cambridge to John's shed for the day in order to get the Austrians actually on a table for the first time. There wasn't a massive amount of thought put into the game, it was just a bit of an excuse for a duff-up. John is easing his way back into Napoleonics after a lengthy lay-off so we wanted just a quick, low intensity game that wasn't going to tax the brain an awful lot. 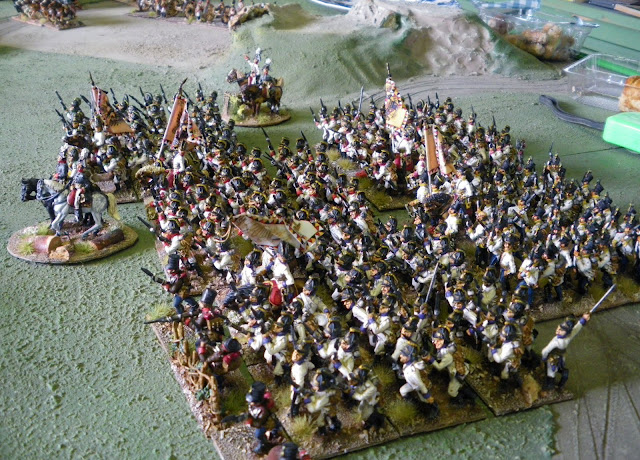 Close up of the attack columns on the left. Everything fine at present (sausage roll in support)
It was a pretty straightforwards set-up, a village complex on the (Austrian) right, some skirmish buildings and walls on the left,  a few woods in the centre. No big artillery platforms anywhere, French defending. We didn't have a huge amount of time so the French deployed quite far forwards,which didn't help the Austrian cause much. In retrospect we probably could have been a bit cleverer with the terrain, 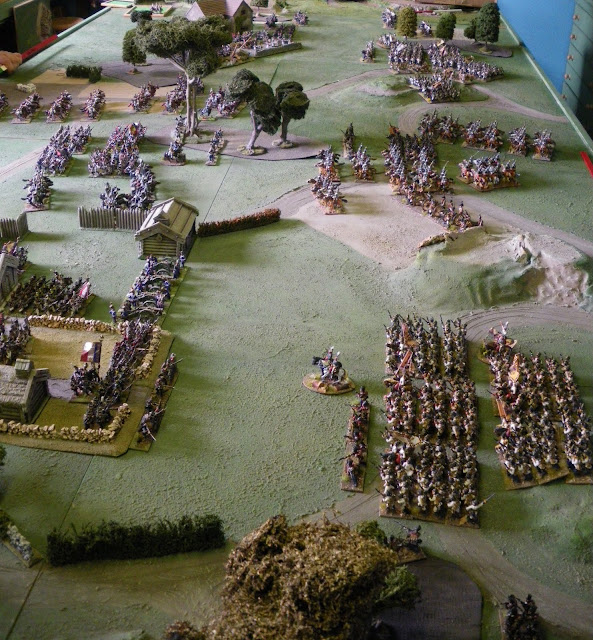 Panorama of the early stages
The only decent area for cavalry was in the centre which unbalanced things somewhat. I concentrated the Austrian's new shiny hussar brigade there and the French had a regt each of Chassuers, dragoons and cuirraisier plus a horse btty.  Each flank had an infantry division to take the respective village areas. The one on the right had a dragoon regt attached.
We used a variable morale system for the infantry, all btns were treated as 1st class line until they took their first morale test,where-upon they rolled to discover their true class: Austrians: 1 to 3- 2nd class line. 4 to 10 1st class line.
French: 1 to 4 -2nd class line 5 to 7 1st class line, 8 to 10, veteran.
French young guard: 1 to 5, veteran. 6 to 10 Elite.
All cavalry was line and all artillery was 1st class.
The Austrians fielded 1 infantry division of 2 Grenzer, 5 line btns with a 6lb btty and 18 skirmishers, these took the left flank. In the centre was a hussar brigade with 14 squadrons of hussars each of 6 figures.
On the right was an infantry division of 6 line btns with a dragroon rgt of 6 x 6 man squadrons plus a 6lb btty and 12 skirmishers. All btns were 48 man strong. 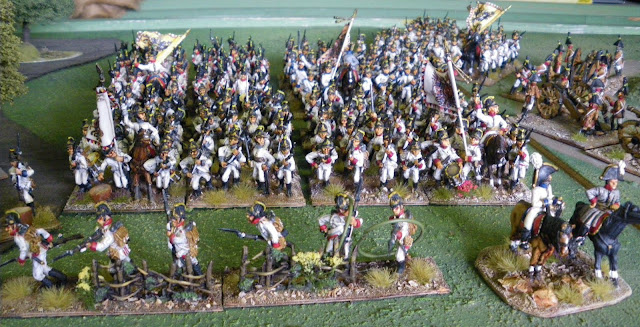 5 battalions: should be enough to take a village, surely? 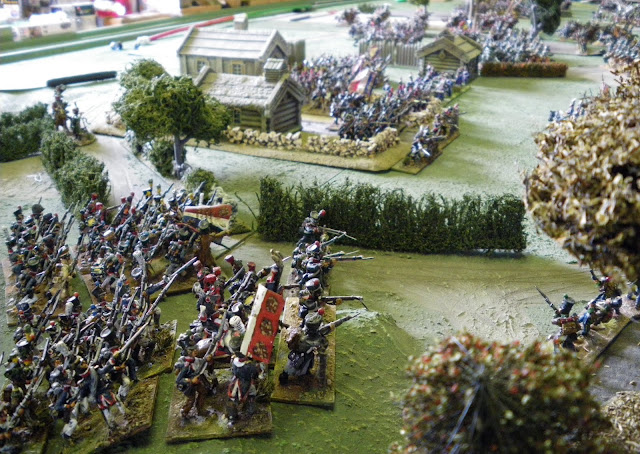 Connoissuer French attempt to outflank the Austrian left
The French had a 2 infantry divisions each of 6 x 36 supported by a 6lb btty, 24 chassuers and 18 skirmishers. One of each occupied each flank.
In addition they had a young guard division of 4 x32's plus a heavy cavalry outfit with 1 x 32 of dragoons and 32 cuirraisier with a 3 gun horse btty.
All in all, I think the French were too tough for the poor old milkshakes. 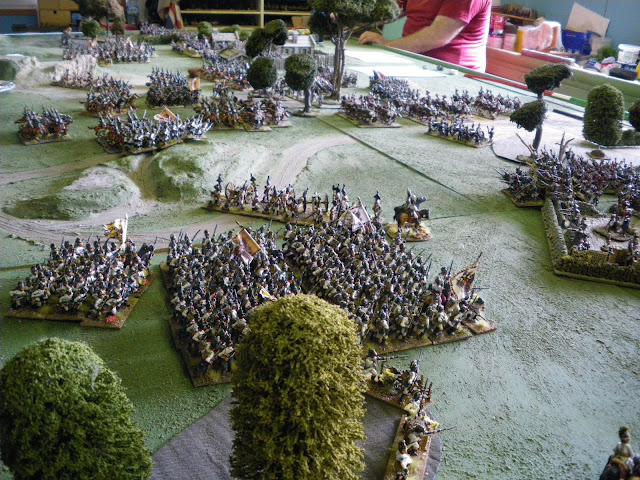 The Austrian right develops
The Austrians trundled forwards, because of the speed of our set-up it meant the Austrians couldn't really get any artillery preparation, however they manfully pitched into the attack against each village. They actually did ok, they got forwards,got the guns into position and started to work  towards their objectives.
In the centre the massed hussars nullified the french cavalry, a typical ding-dong Grand Manner cavalry scrap continued through the whole game.  A lot of folk can't cope with the cavalry system in ITGM but the more I read of historical accounts the more they turn out like ITGM battles. Units go forwards, battle it out, retire, new ones go in, the original ones rally, go back. Its all about having local reserves. Both sides (typicaly) won the combats they should have lost, and lost the ones they "were certain" to win. The rest of the cavalry was squeezed on the extreme Austrian right, and this went a bit more to the script, with the Austrian dragoons making short work of a chassuer regt, which forced a couple of French btns into square and took them out of the fight for the village. 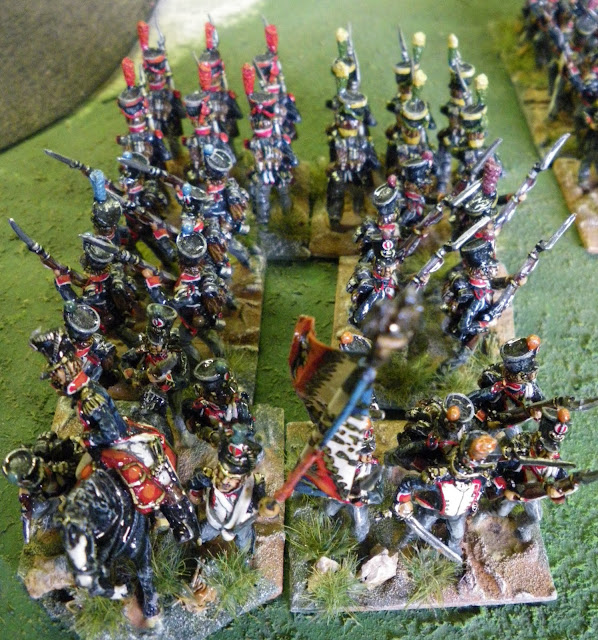 A recent new acquisition: Classic Connoissuer infantry painted by Doug Mason, skulking in square.
On the left a grenzer btn waddled in line through a wood on the the extreme flank, it never got anywhere for the whole game but it did tie down 2 French btns (a bit) so it wasn't a total waste of time.
Meanwhile the asault against the skirmisher buildings and the walled compound went in. John concentrated a lot of fire on one unit (always a mistake in my book) but the size of the Austrian units allowed it to be shrugged off. I had some success at first and things were looking rosy. 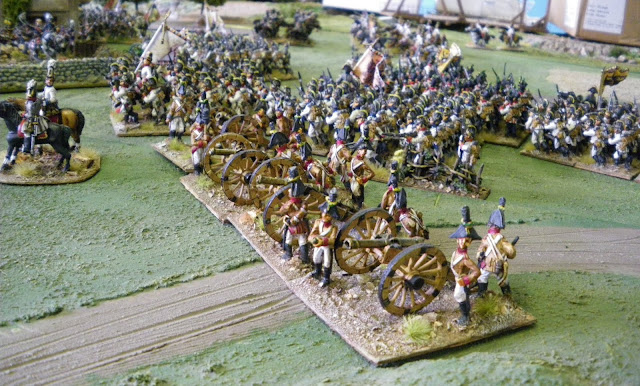 6lb battery supporting the Austrian right
The French artillery btty retreated when charged and the lead 2 Austrian units crunched into a lone French btn manning the wall. In fact I had a bit too much success. The French btn routed after the first round of combat, with relatively light casualties. I would have much preferred for it to have stuck around for at least a second round of combat as I had 2 more btns to re-inforce with and the French had one. This would have allowed me to ruin 2 French units, as it was it meant the French just pulled back a bit, I couldn't exploit, and the 2 units I had in the front line were badly shot up. They took more and more fire from the flanks and that was about it for my attack on the left village. 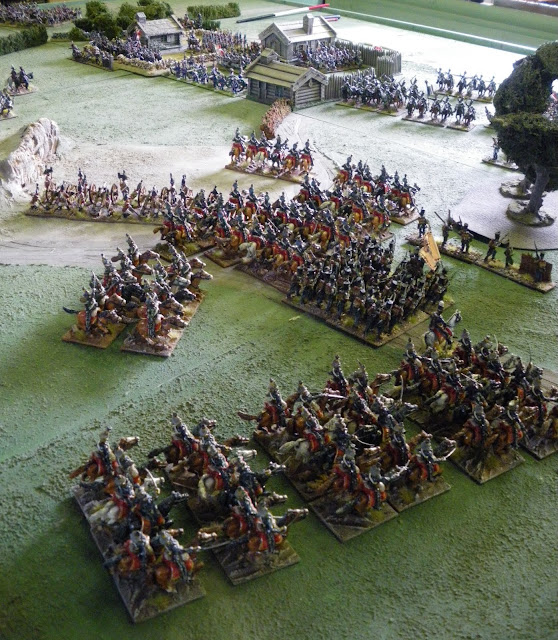 Hussars and Grenzer demonstrate in the centre
The right hand flank told a similar story, despite the dragoon's success I couldn't get sufficient  force to bear on the village, I was reasonably successful at clearing the walls but couldn't find room to deploy those big Austrian firing lines. When I finally did, it being Austrian, it took so long to deploy that it was shot down before it could do much damage. Again, the Austrians after initial successes just couldn't finish off those Frenchies. 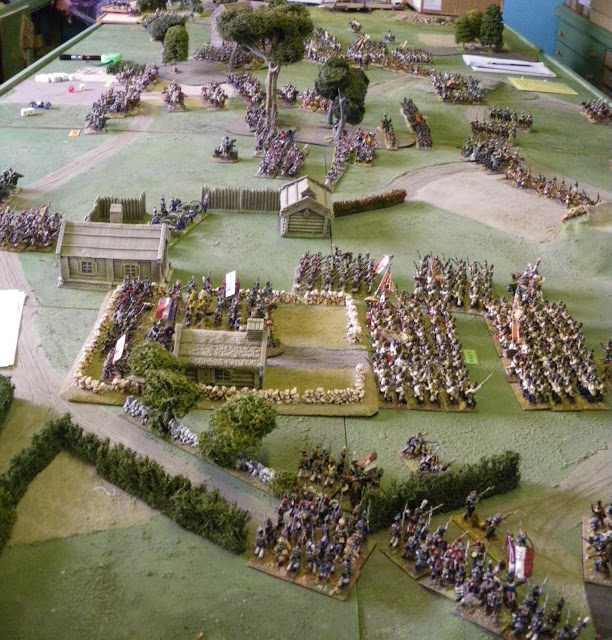 High point for the left. The Austrians couldn't get over that wall.
Things were coming to close, dinnertime was approaching, and the Austrians had run out of steam. We called it a day.
So in the end it was a suitably inauspicious start for the Austrian army, but then, as we all know, all troops get beat the first time out!
(Good Lord!! I've just noticed...60,000 hits!!- does that mean I can have drink?)