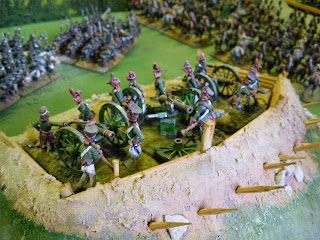 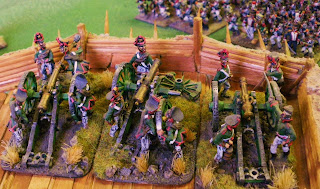 A Russian half battery defends a rather spiffy fleche
As promised, a few more pictures of Lander's Russian stuff. He has an AWFUL lot of artillery. I honestly don't know how much. I THINK he has....2 x line horse batteries, 1 x Guard horse battery, 1 and 1/2 Guard foot 12lb, 2x line 12lb, 3 x line 6lb...which makes for 51 artillery pieces, that sounds about right, I remember we once worked out the frontage of them all, and it was pretty scary (the above would be about 10 foot!).
On top of this he has quite a few limbers, pontoons, caissons etc which are nice bits of "fluff".
The first 2 pictures are of an Elite miniatures battery occupying a scratch built redoubt, John was rather keen on converting a lot of his artillery units, here the Elite crew have been tweaked to have them changing a damaged wheel as Connoisseur French infantry advance on them.
The Fleche is quite clever,made of aircraft engine filler (only about £400 a tin!) it sits on top of an existing hill and is moulded to its contours...then the hill can be used seperately. 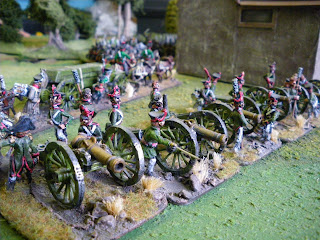 12 lb foot battery: The backbone of every Russian army. Bicorne pontoon train in the background
Above is a 12lb line battery, this is made up of just about everything apart from Russian artillery figures! As I've said elsewhere one of the beauties of a lot of Connoisseur figures is their versatility. John has included French, British, Prussian, Spanish and ACW figures in the crews.
He hasn't done a lot of work, just changed a few heads, Russian shakos, added a few plumes and implements. The officer pointing with his sword is an ACW officer in a frock coat and sash. A new head, replace his Navy colt with a pin sword and suddenly he is a Russian officer. 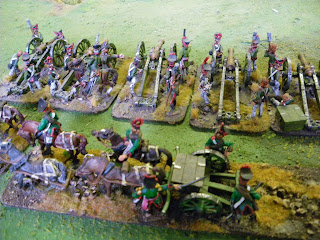 Another view of the same battery, limber in support.
The mounted battery officer is the venerable and still great Connoissuer French infanty officer, berating a Spanish officer figure....you just need to be able to see the possibilities. 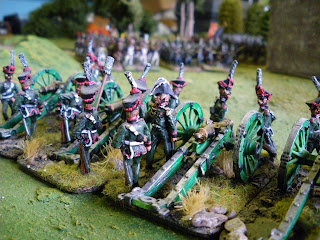 Russian Guard horse artillery
Finally, a view of some Guard horse guns, these are pretty much out of the box except for the officer which I think (can't really remember) is the Connoissuer French Marine of the Guard officer!...well, hes a bloke in a fancy uniform and a big hat, good enough, paint him green and there you go.