First Victrix Finished and the Wurtemburgers have flown the nest 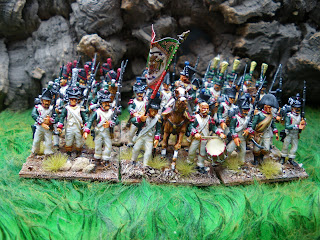 Finished the first Victrix Italians painted in the early uniform last week, and they turned out fine. Another box should be on it's way to complete the regt and then I'll just keep adding to them as I see fit. I think this is going to be a sporadic project rather than doing them all in one hit 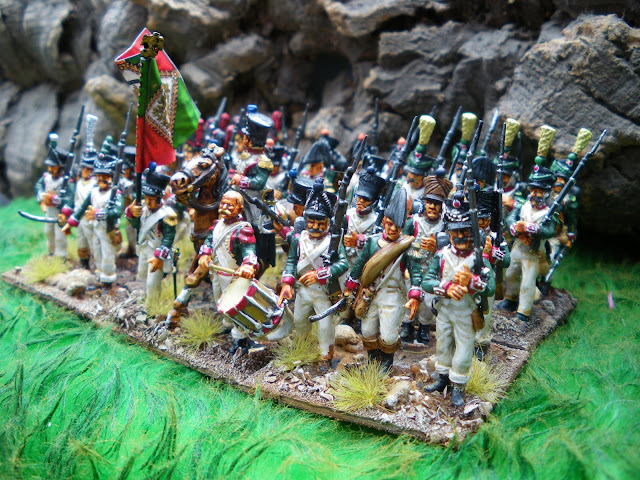 3 of the Wurtemburg Btns - chaps on the right lack a flag -typically it arrived this morning...a nice pink one
The other completion last week was the final battalion of Wurtemburgers from Firing Line Miniatures, I delivered these to Noel down in Plymouth over the week-end, so he is now the proud owner of 6 x 32's and a battery. Skirmishers are going to be a real problem. I'm still not sure what figures to use. I will however, order the figures for the Light cavalry regt today.

Noel has plumped for the mounted Jagers, which will look good in green 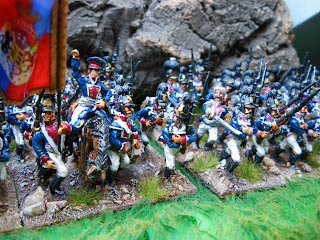 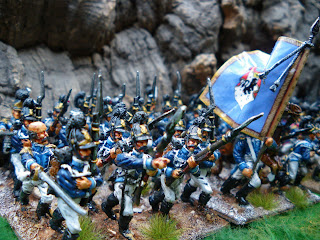 Close ups...having seperate heads makes for plenty of variation in adition to the 3 infantry poses shown here plus sargent/officer etc shown here. There is another infantryman with leveled musket who was rejected because those figures are always a pain because they inevitably stab the guys in the next unit..Firing Line also make the additional seperate heads which can be seen here (bandaged, baldy, Bonnet de Police etc) One or two of these add even further variation and character to a unit. The mounted officers are random Connoissuer figures I had lying around.

So..... The painting table is empty! What next?