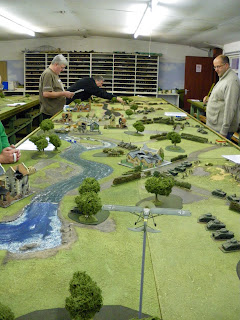 The view from the German artillery OP plane.
I've had a fairly fabulous 5 days gaming, to be honset I'm pretty tired after but its that happy sort of tiredness.
Last friday saw me heading up to Scarborough for a WWII game.
It turned out to be an excellent weekend, Gerry was putting on a post-Cassino Italy game which, amazingly, was not wall to wall kit but quite the opposite.
I pitched up and was placed on the German side.
The scenario was rather loose. The total German forces consisted of a single parachute regt of 3 btns, supported by 2 companies of pak 40's, 2 coys engineers and 3 ad-hoc armoured coys 2 each of 2 x stugs + a Tiger 1 and another of 1 marderIII plus an Elephant.There was a nebelwerfer btn of 3 bttys in support.
3 btns plus 8 AFV's and 6 ATG's to cover 28 feet of table ....tricky.
These forces were given the task of defending a dry river line, there was a single bridge in the centre of the line which was the only point at which wheeled vehicles could cross, the rest of the river was no significant obstacle to tracked vehilcles or dismounted infantry. Other than that we had no briefing. Given that we had 2 companies of engineers the inevitable bridge-blowing question was asked. Yes, it would take 10 turns to lay charges on the bridge.
We had no idea what we were facing but my guess was a British Infantry division and a tank brigade. Not far off as it turned out; although they had only 2 regts of infantry per brigade (there were indeed 3 brigades) plus 3 tank regts, and 2 coys of 17pdr towed guns, plus an MG btn.
So, we deployed. I played in the centre with a para btn, both eng coys, theElephant and marder plus the Werfer observer.We figured (correctly) that the bridge had to be the main allied objective. Everything was hidden apart from the Elephant which I deployed in view covering the bridge. This was a psychological ploy as much as anything and it worked, the Elephant didn't do a massive amount in the game but it did prevent the superior allied armour (54 AFV's versus 8) from using much of the ground around the bridge. 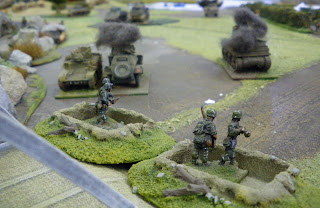 The view from the bridge: Dug in para engineers repel the British tanks.
It took the allies a little while to figure out that the bridge was their sole objective, (to establish a truck supply line), and it cost them. By turn ten they infiltrated 2 infantry coys along the river bed to attack the engineers at the bridge but it was too late, and the bridge was blown, on the flanks they made slow headway, there was a moment when a company of shermans could have outflanked the bridge but they swung right instead of left to go hunting down a battered tiger.
It was a difficult scenario, and had sufficient tension for both sides. Would the British work out just how weak the Germans were? In the end it took them too long. 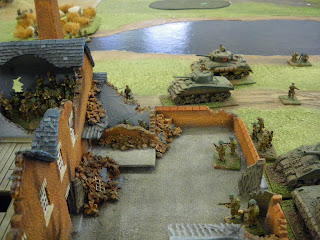 Game 2: My Brits consolidate a factory building
We turned it around for a second game by swapping sides. With the suprise element gone the German deployment was made a little more flexible, but that didn't deter the Brits, who made a stronger push in the centre, and quickly gained the bridge. In this second game the Germans attempted to trade ground and probably took fewer losses than in the first, but it was to no avail. The bridge was captured intact.
All agreed the scenario was a good one, and the room for manouvre allowed by the low troop density was instrumental in providing a good game.
Next up, in the spring we will try an early war scenario.
So....everyone said there goodbyes and departed on Sunday afternoon.
Except me.
Gerry had very kindly invited me to stay on for a few days for a Napoleonic game:
Just the 2 of us:
Vittoria. A relatively small game by WHC standards ....a mere 420 square feet of table and aproximately 7,000 figures, a mere bagatelle for experienced Grand Manner players.....right. 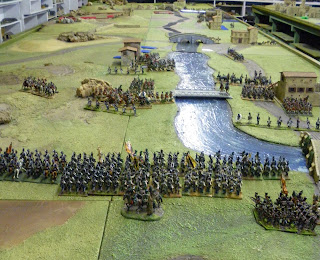 Spanish infantry mass west of Tres Puentes at the begining of the game, the river Zadorra winds east into the distance
This will require at least one blog entry to describe, so stay tuned for a full description next week!