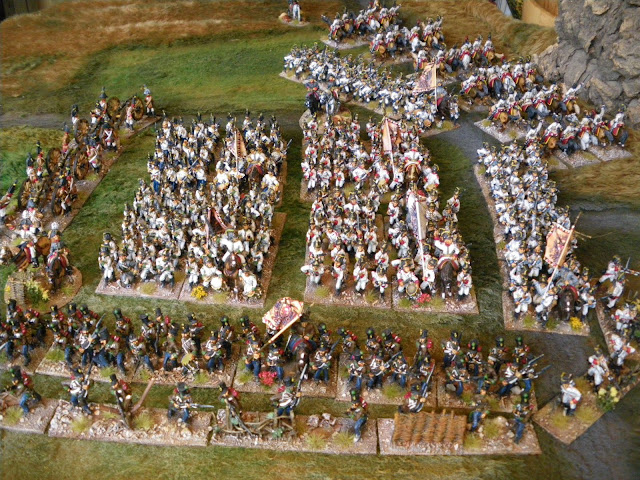 All of the Austrians to date: 5 German line, 1 Hungarian, 1 Grenzer, 18 skirmishers, 1 battery, 36 Dragoons,
April was a busy month, so sorry for my lack of posts here. I'm afraid blogging is the first casualty in the time stakes when it comes to work, painting, home stuff etc. Sometimes something has to give.
Despite this my painting total for April was bloody impressive even if I say so myself, 130 pieces all told. A dragoon regt (counts as 72 pieces), another 48 of German line, 6 skirmishers, and 5 mounted generals. Not bad going at all. I didn't even really feel I was making a special effort. Most of the cavalry I got done while I was down in Devon at Easter, and the infantry were done over the odd week-end plus evening, likewise the skirms and general figures. Generals are always pretty easy as you can usually get an entire figure finished in an evening and still have time for everything else.

Dragoon column led by a spiffy officer
The dragoons were not quite what I expected, when I ordered them, I'm sure I asked Mr Moreby for all the figures to be with sword down, but given that with the rest of the order I'd asked for max variation he gave me half sword down and half "waving sword about overhead, unlike any cavalryman, ever" pose...in the end I'm glad he did, I replaced the rather fat little curved sabre with a very straight (and probably overlong) flattened pin, which looks a bit more like a  pallasch, then, I cut a 'v' in the shoulder of the sword arm, which allowed me to bend the pewter arm round to something which resembled ' a point' , well, at least a bit more than the original. 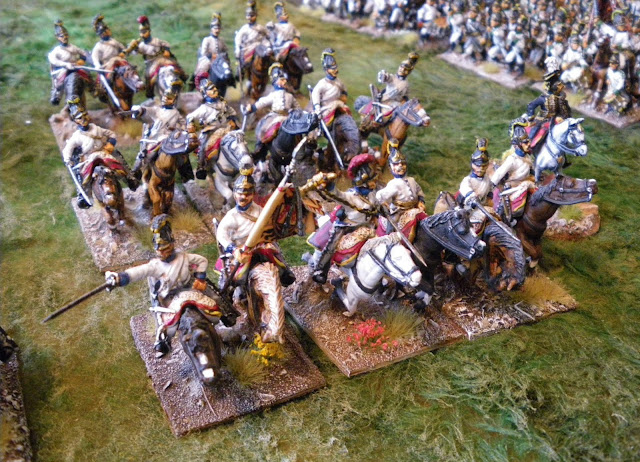 GMB standard as ever- annoyingly Elite don't make an ensign figure
The trumpeters got similar treatment to bend the trumpets round in front of the figure (I hate that blowing the trumpet over the shoulder look), and added cords out of 5 amp fuse wire twisted in the Dremel.
I'm happy with the net result, at first I wasn't, but I these lads are growing on me.
When I thought about doing this unit I had in mind a regt which uses the same figures at the WHC by Doug Mason. It's beautiful, some of his best work. To this end I took a few pics of what he'd done the last time I was there in order to get some references of what he did, so I could try and emulate it. Comparing the 2 now I'm not even close, ...to quote Samual Jackson in Pulp Fiction: "Not the same ballpark? It's not even the same sport"....(he wasn't talking specifically about wargames figures but you get my drift) 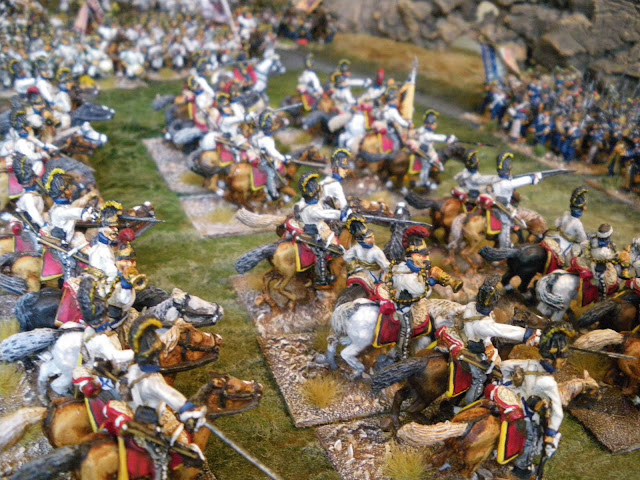 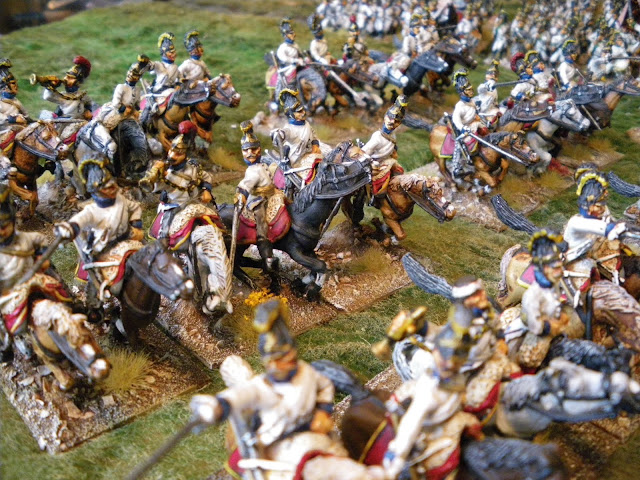