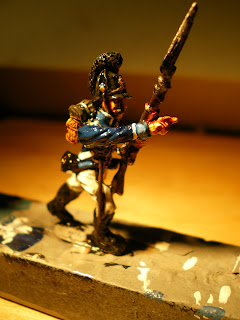 Wurtemburg NCO
Managed to finish the ten sample Wurtemburgers in a couple of evenings which was pretty good, they were nice enough to paint, and I quickly got back into the swing of it after a 2 year layoff. It was quite peculiar to paint bright colours again instead of continuous Khaki's and greys.
The change up from 20mm to 25 wasn't too bad either, not as drastic as I thought it would be. 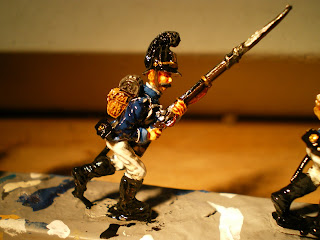 Infantryman charging at high-porte
I quickly got back into the groove, though re-learning to deal with expanses of white took a little longer to remember!
All in all a straight forward paint job. Grey undercoat, then Vallejo acrylics apart from an India Red oil wash on the flesh and a bit of black magic-wash on the white, plus a Burnt Umber oil wash on the pack. 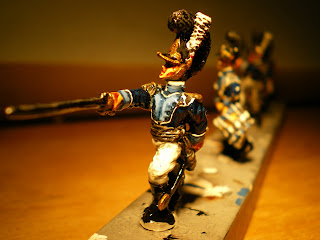 Officer
High-lights were just mixed up from the basic colour, and given a further small highlight.
Wurtemburg uniforms are a bit of a pain. There is a lot of conflicting information out there, down to even disagreements over facing colours for different regiments. The whole thing is not helped by them adopting the German practice (funny that, being Germans) of naming the Regts after their Colonels (Inhabers) particularly as a number of them died between 1809 and 1814. So the same units have different names at similar times, plenty of scope for confusion.
I was helped by having the North edition of the Faber Du Four collection of prints drawn during the 1812 campaign. A lovely book and useful contemporary reference. I went through it and it was quite handy despite concentrating on the artillery.
These figures are painted up as the 5th regt, I've ordered the requisite miniatures to make up the rest of 2 x 32 man battalions for this regt, then I'll embark on 2 more Battalions for the 7th Regt which had red facings. Standards for these are en-route from GMB

I've had loads of trouble leaving comments for reasons I can't fathom, hopefully this one will work. The Wurtemburgers look great, I'm going to have to do a bit of reading up on them. Are you still up for doing a battery as well?