Finally Austrians (I hope you lot like white...because you are going to be seeing a lot of it)

Here they come, the first units of Elite Austrians. I've been painting quite a bit more than it appears here, as one of the methods I've been using is to mass produce figures which get painted but are waiting for other bods before getting based up. So I have nearly enough for 3 x 48 man units (2 line, 1 grenz) plus a load of guns and gunners and about another 20 skirmishers in addition to whats on show below. This way hopefully  plenty of units will be appearing here at regular intervals. 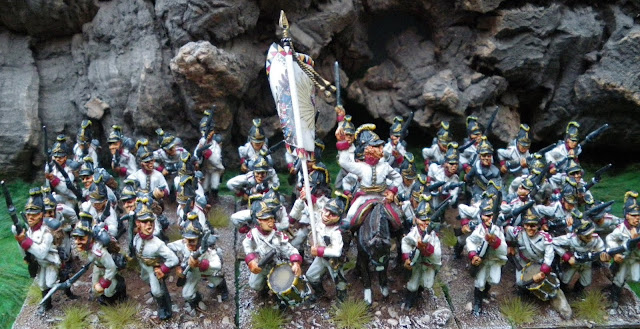 This is very much a "work in progress" and I think my white style will change a bit as I produce more units. The figures here were sprayed white and then washed with a thin tan with then a grey white and finally a normal white applied. For the next batch I'm going to try a yellow ochre oil wash rather than the tan as I think this will be more controllable. I doubt anyone could tell the difference but you know how we all get a bit quirky about these things. 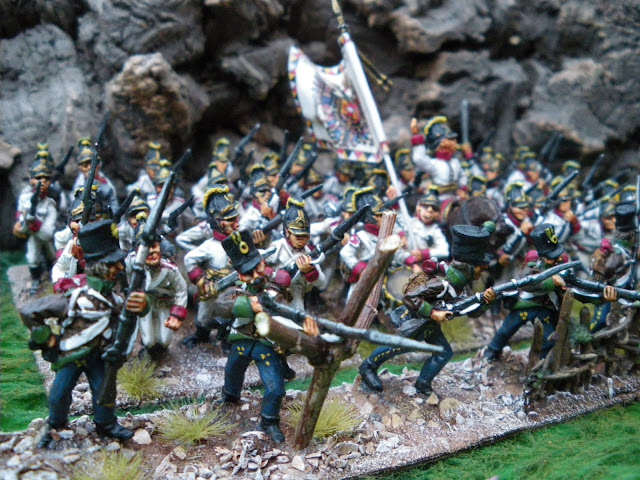 The Grenzers are nice, one of those very rare occasions where you can get away with mixing manufacturers. Most are Elite but I "found" about 80 odd Connoissuer Grenzer lurking in the Box. They mix nicely. They are old soft metal figures so I've managed a few head replacements and twists to give them variation, The 48 man unit is awaiting finials for the standard bearer but is finished other than that.
I also discovered that Elite do yet more skirmishing Grenzers in the old 1796 style headgear. I'll have to investigate these.
I like the green facings for these chappies. Just about every wargames unit of grenzer I've ever seen always has red facings....no idea why, they had all sorts of colours...(I'm drawing the line at pink, though)

As usual GMB provides the flags, Austrian standards being what they are these are really detailed, and make a massive difference to the finished unit
No need for any conversions in the line unit, there are so many variants in there anyway.
So, thats a bit of a start to my Austrian adventure. I had to smile the other day reading some waffle on TMP. Someone was enthusing about embarking and nearly finishing a "big project"  which was some 150 figures....It suddenly occured to me that that was about the number I've finished and I sort of view these as samples as much as anything...hmmmm the perception of scale. Mind you, I bet his are better painted than mine.