Too many games?? surely not.

Not often you hear me say this, but right now I’m feeling a bit “gamed out”!
It all started a few weeks ago when Philip M suggested a game round at his place in order to get out his new Americans, to be pitted against my Germans. No problem. Unfortunately the dates got changed and we decided to have the game on the 29th of November, this was fine, EXCEPT for the fact that I’d already eagerly agreed to head up to Scarborough for Gerry’s 50th Birthday bash, which was kicking off on the 30th. Now getting a week away was not too bad, but then adding another days gaming to it might prove tricky with SWMBO’d.
I casually dropped this into conversation at a suitable juncture, and incredibly, received a favourable response. Marvellous!
So all round to Phil’s for a Salerno beachhead scenario. 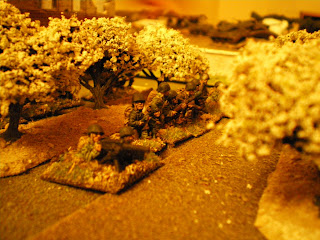 Phils Americans hunker down in the Almond groves
A cracking time was had by all (me, Philip, and Mr Freeth). The scenario was based on the counter attacks by 16th panzer in early September 43, with 2 KG’s attacking a US infantry regt which were then reinforced from the beach. I will do a further write up on this but suffice to say, the Germans got mullahed.

So, Sunday saw me off up to Folkton. The week was split into 2 halves, the first 3 days being just 6 of us for Gerry’s new take on Waterloo.
This proved to be a good game incorporating a lot of the “new” rules for In the Grand Manner Ged has been playing with for a while now. 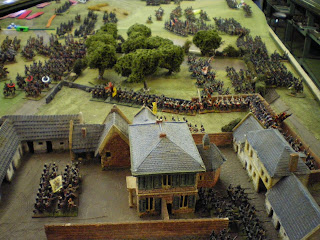 Hougemont stands like a rock
Briefly, they include using skirmish screens as 12 man units rather than six, which reduces their flexibility and means skirmisher buildings become redundant.
Also, he’s introduced Skirmish Battalions: These are normal units (36’s 32’s, whatever) which perform exactly like skirmish screens. So, they fall back if advanced on, evade if charged, can romp around in woods at will, count as skirmishers for being fired on by infantry and artillery etc. The difference being that they fire like skirmishers as well although they are fired on and take casualties like a normal unit (with the modifiers for being skirmishers). So while the unit is in the first bracket they get 12 D6, second bracket 10 D6, third 8 D6 etc. This is irrespective of their starting strength, so a 30 man unit gets the same number of fire dice as a 48, say. If they fall beneath 50% they disperse. Also, if they fail ANY morale test, they also disperse.
They are signified by being in line with their bases staggered.
Other rules we were using was that a unit always needs his divisional (not corps or army) general with in 12” to initiate a charge.
Finally we were using the disengage rule: This allows an entire formation to roll to attempt to pull out of the line, 5 or 6 needed, modified by Army Cox’s if in range (Napoleon and Wellington were +2 each, Blucher was a MINUS2!)
If successful, the ENTIRE formation, infantry + any attached cav or artillery, teleports back out of the line 30”. All rout and retreat markers etc are removed and the whole formation goes onto “retire to own lines” followed by 2 turns of “walkabout” just like a cavalry unit. It can shuffle units around without going closer to any enemy and then after its walkabout is free to move off again.
This sounds at first like a fairly mental rule, but for big games, with lots of reserve formations it works really well. When a formation is getting knackered or has a lot of units routing, you can pull it out and re-organise. It rewards players who keep a second line to then throw into the gap, or if you have a plan which will allow 1 corps to trundle forward to do the damage and then have a fresh outfit ready to finish the job.
Enough for now….a bit more to follow on Waterloo, Plus Torgau and Chemnitz revisited… (The Return of the Gedaye)! 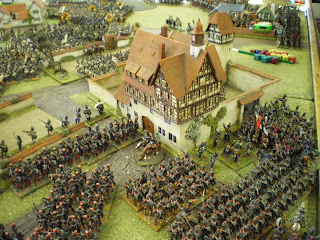