A couple of weeks again I took advantage of a friend's offer to house sit her house on Dartmoor while she is abroad. A very pleasant few days, which including being able to paint up the first Austrian cavalry regt (pics coming soon!).
The highlight of the trip however was inviting myself down to Noel's (25mins away) to have a look at his Smolensk game which I knew was in progress. I had intended just to nip down and have a chat and a laugh for a couple of hours. As it happened, one of the Russian players was absent so I was recruited to play on the Russian left flank for the evening. Great fun. I was playing against Eric who had massed plenty of cuirraissier plus copius quantities of infantry, but had plenty of ground to cross and would be funneled into a cone,so I thought I might be able to make a fist of it. The extreme left was a bit iffy though, if the Russian cavalry didn't do the business, then I was stuffed. They duly didn't. Failing to win 3 melees in quick succesion the French were rampant. Finally the dice intervened, The French rallied and clattered into the Russians  who were caught at the halt..I outnumbered them but was subsequently 5 casualties down before the melee ...I think I had 37 die to roll to Eric's 28...I rolled 12 sixes!!....still only winning by 7...Eric obliged by only managing 6 more hits meaning I'd won by 1!...This held the French but meant he still had the numbers, as related in Noels' blog it wasn't to prove enough.  http://garagegamer.blogspot.com/
Lots more pics of Noel's cracking collection and table and a less garbled account of the game can be found there. 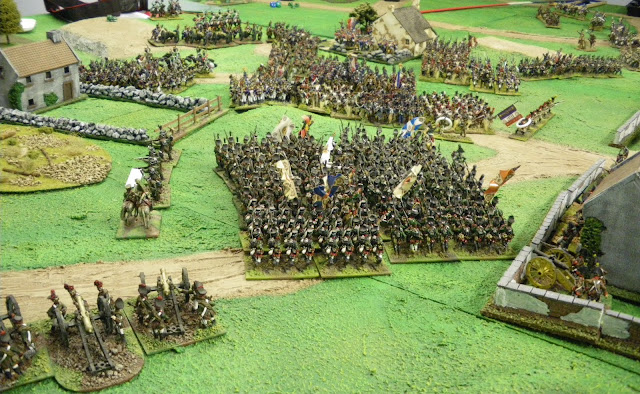 Russian infantry advance into no-man's land and dither about
Elsewhere I committed the most elementary wargames mistake. Years ago, I recall geting some good advice from Mike Ingham. He told me to always make sure that when you commit a formation, have a clear idea of where its going and what you want it to do when it gets there. Now that sounds pretty basic, but its incredible how many gamers just point their troops in a direction and wait to "see what happens"...check it out the next time you watch a game...anyway, I did exactly this in the Russian centre. I rolled forwards with about 8 btns with vague ideas of catching the French in the flank as they advanced onto Smolensk. However, I went on too narrow a frontage, against larger numbers. I only worked this out when I got there, huddling behind a rise beyond which were hordes of Frenchmen....Not a smart move. 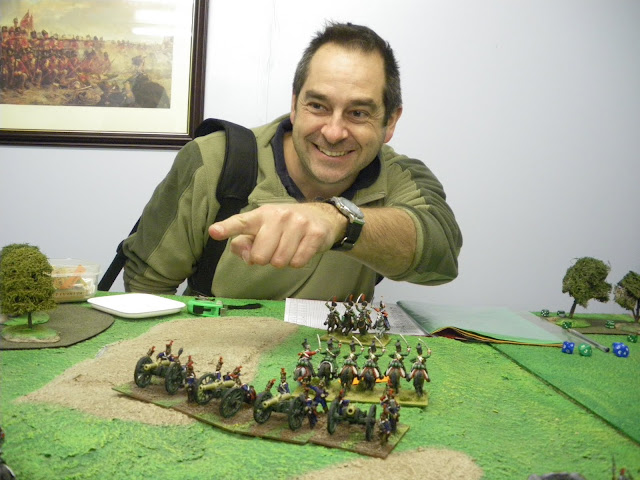 Neil spots my error, and displays his concern
If I went "over the top" I would get mullahed, so...I dithered...shocking..they just milled about under desultory artillery fire. Not a great moment. 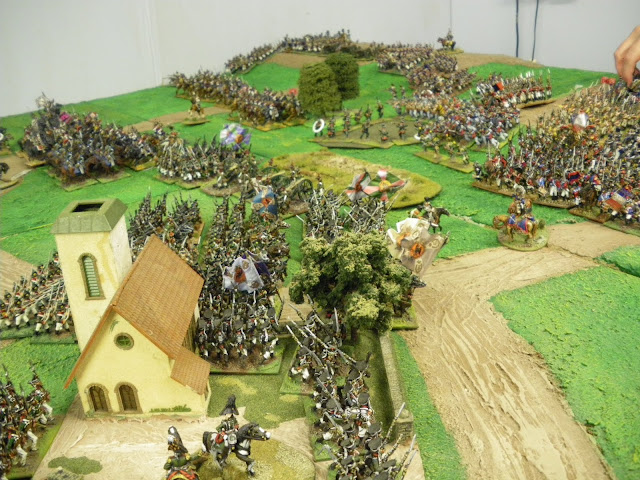 The situation on the Russian left: French cavalry being temporarily repelled while Russian infantry and artillery mass in favourable terrain
The infantry on the left were better off. Again, outnumbered, but I had a decent position. Lots of rought terrain to sit a battery behind and a narow gap in which to fight the French with a village to provide fire support. Eric duly advanced into the teeth of the Russians and took a bit of a pasting on the way, this resulted in a big old duff-up between 6 Russian units and 5 French. The dice were pretty average and I couldn't get the big hits against the French. The melee resulted in a vicious draw with both sides pushed back.
The game was well- set but that was all we had time for that evening.
All in all, a highly enjoyable night, and I must thank Noel for his hospitality, plus of course Eric, Neil, Andy and Dom for putting up with me and my "London Ways"....(whatever they are?).