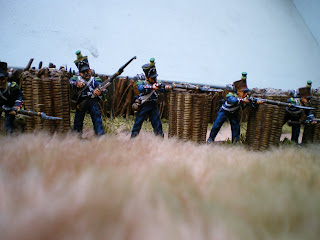 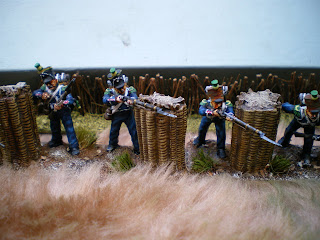 First efforts: Skrirmishers
Got a big old parcel today from The Perry Emporium.
I bought a pack of the plastics out of curiousity a while back and must admit I was pleasantly surprised, I've never subscribed to the Perry fan-boy club that seems to permeate virtually everywhere in the Napoleonic 25mm fraternity these days. To hear some folk slavishly drivel on about "artistry" and "perfect human beings" etc is actually quite embarrassing sometimes, A lot of their work for Foundry was bloody awful. I think folk were a bit blinded by the fact that they were painter friendly and that they got good press and coverage in the wargames mags - Emporer's New Clothes (Note to self: If I ever start up a figure company THATS what I'm going to call it!).
However, these days, branching out on their own, they are making some nice figures. Not necessarily the MOST AMAZING FIGURES THAT WERE EVER MADE!!! which is how some of the more onanistic fans would have it, but nice figures nonetheless.
The queer thing is I reckon the plastics are actually better than the metals. Never thought I'd hear myself say that, but there you go. Some of the metals are a little bit spindly, and there is quite a lot of trimming of lugs etc to do, but nothing major. The mounted officers are very nice. I was delighted with the horses. I was afraid they would be Foundry-esque pit ponies but they are tall, and slim and elegant. Seperate rider and cast on saddle, but done in a much nicer way somehow than I've seen elsewhere.
I've painted up the first box of plastics and very nice they are too. They are very easy to paint. Which is why,as I said, I think they are so popular. I wasn't too keen on the figure mix in the plastics box so I've decided to go for a bigger project and mix in some of the metals, - more officers, mounted officers, command and a bit of variation in the infantry. If you build them out of the box its a pretty dull looking unit. No mtd officer, 1 officer, 1 drummer. Plus there is the mix of greatcoats and ...not greatcoats..I thought it might be more fun to have perhaps a regt of 3 btns of each - so have started buying metals (and more plastics) to accomplish this. Subsquently I've not based any of the line stuff yet until I get more figures finished so you will have to wait. I have however based up the 6 skirmishers which are above.
I must say I was impressed with the way the 3-armed ones sculpted these. 2 bodies, and 3 sets of arms that fit perfectly to both bodies. Extremely clever, so you can end up with eerrr...7...or 8? combinations. I was bit bothered about the lightness of the plastics getting knocked over in the hurly-burly of ITGM so decided to weight them down with these Mahooosive gabions from Irregular miniatures. It does the trick, believe me. They are now heavy. Future skirmishers will also be based in 3's (I've always preferred that) and will get plashed hedges, walls etc. Their own little bit of cover to lug about the table.
Anyway, I'm off to prep up these figures and watch the start of the second test against the West Indies...I've got a bad feeling about which of these is going to be the more pleasant experience.