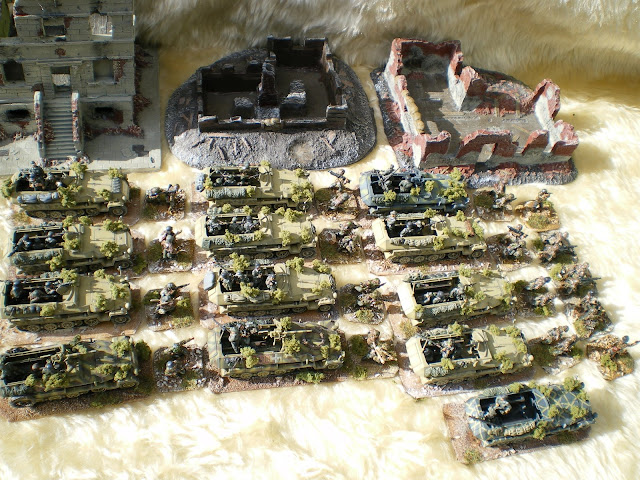 I'd had a number of 251's previously which had been acquired in dribs and drabs from shows and e-bay etc....a platoon of Britannia, another from Frontline, I already had about 15 or 16, but....they lacked commonality, different models, painted at different times. Didn't quite look right.

So, I flogged them on e-bay and with a healthy Paypal balance looked around for a replacement.. I wanted a unit where the vehicles would be similar, I checked out the various kits available but wasn't too keen on making that many AND then having to paint them...Milicast seemed the best bet, good, but expensive.. I was very impressed by the Dragon die-cast stuff but they were a bit pricey. A quick sum and a dozen plus 251's was going to cost getting on for £200, before crews and extras, and as you may have gathered by now I'm partial to plenty of crews and stowage:

Then I discovered a man called Craig at Realistic Wargames. He was knocking out Dragon stuff (I think they are seconds) at the ludicrous price of £5.95 a time, assembled, painted (better than I could). No Brainer as our American friends would say.A couple of e-mails and he informed me he could get what I wanted reasonably quickly. 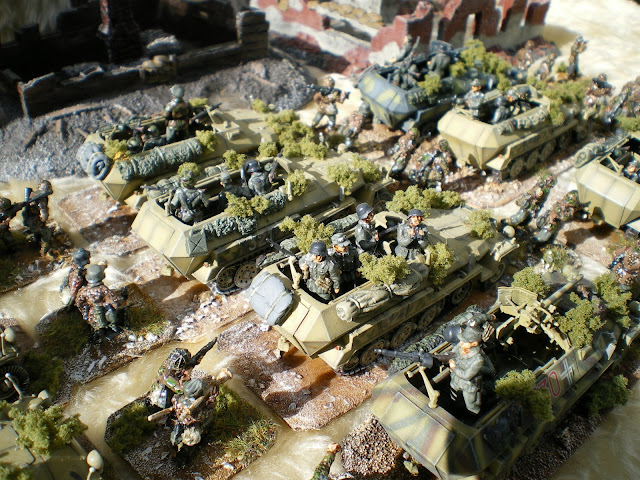 AB Crews, Fantassin dismounted grenadiers
Next up was an order to that nice Mr Michael at AB figures...if you cruise around their catologue they have dozens of figures suitable for crewing vehicles (ie no bases), a few more bits and bobs from the fabulous and underrated Lammercraft and Elhiem ranges and I had the 40 -odd figures to populate the half tracks. I bought a big bag of sage foliage, and a load of stowage from SHQ and Skytrex.

Knowing the vehicles were all there and ready to go made painting the crews a real pleasure, a bit of basing and we have the end result. I must say I'm pleased with them. 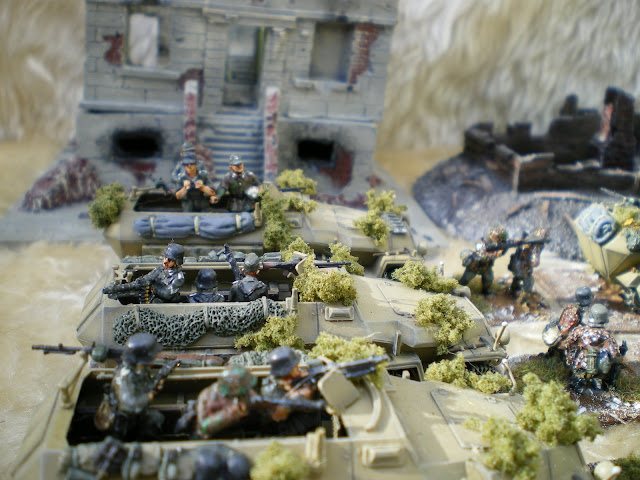 Huge variety in the AB crews

Now, I have come across some sentiments from wargamers who deride the notion of pre-painted stuff....come out with stuff like "Its cheating" or "I don't feel right, if I don't paint them". Now up to a point I agree with them. The idea of just opening the boxes and plonking a load of pre-paints on the table doesn't feel quite right to me either, but given that it allowed me the time and money to then personalise this unit to be something individual with relatively little effort (although, I reckon I probably put more work into these vehicles than a lot of gamers would into something they built from scratch), then I'm afraid I've no shame whatsoever about it. (as this blog continues it may become apparent theres quite a few things I have little shame over).

I probably could paint up 3 or 4 half-tracks and make a decent fist of it in a reasonable time, there are plenty out there who do, and who are better at it than me. The difference is that I don't want 3 or 4 vehicles, I want nearer 20(theres the armoured engineer coy too), and life's too short.

I wouldn't have any standing to be making accusations about someone else using pre-paints when I happily use both unpainted figures and substitute vehicles on my table. :>

They look excellent. Well done. A PzGren btn is something Ive always wanted to do, but been put off by the need to use various dissimilar makes if I want to do the whole thing. Can you post a link or email address to the source/supplier of the halftracks, please? Cant find a reference to that firm anywhere. Many thanks.