Sovs get some Recce 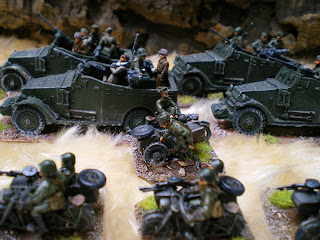 SHQ M/C's and Britannia scout cars
Off and on inbetween doing more Napoleonic stuff I've been adding bits and pieces to my 20mm Soviets, this project has been most enjoyable and the last few elements are falling into place. I started this with a few purchases at Salute last year, so I'm quite proud of having got a considerable force together and actually complete within a relatively short period of time (lots more pics knocking about elsewhere on the blog- look for tags).
There is now a complete Soviet Rifle division, enough T34's for a Tank corps (about 30) plus various assault guns, and now a recce btn. Artillery still needs to be finished.
The pics show a few odds and ends which fall in the broad spectrum of Russian recce troops, which in reality is just getting quite few troop types I liked and creating a unit out of them. Soviet reconnaisence battalions are reasonably well known for having no standard organisation, there are at least half a dozen different variations, so it is an excuse for a pick and mix type of approach.
The little BA 64 armoured cars weren't that common in the recce btns but they will double up as command and liason vehicles for things like tank and assault gun regts. The Frontline models are very basic with bit some good crew and extra bits they are sweet little models. I'm particularly fond of the big old Bertha smoking a fag, shes a Lammercaft figure. 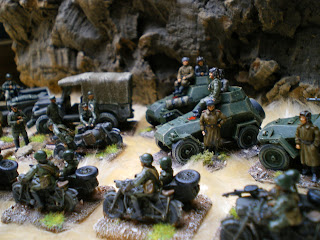 Bertha eyes up some passing Motorcyclists
The Britannia bren carriers likewise will also do extra duty as tows for 45mm AT guns, but are also ideal as personnel carriers. As models they were a bit of trouble as the crew are all British- subsequently filing down British helmets to look like Soviets was a right arse...In the end I cut the heads off most of them and slung tissue paper tarps over the back....sorry to spoil the illusion! 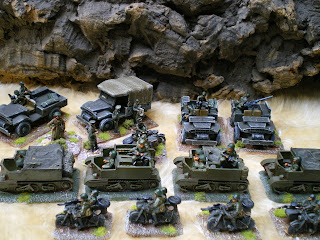 For some reason I've always liked White scout cars, I remember a friend of mine having a model of one (Italeri, maybe?) when we were about 15 and I've liked them ever since
The Britannia ones are servicable models, but chuck in some AB crew and they look great. Again, they will do double duty as personnel carrier or command vehicles, hence the preponderance of officer types. 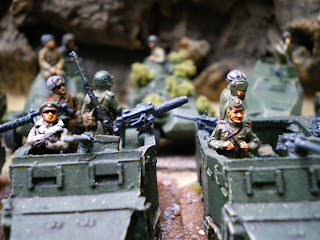 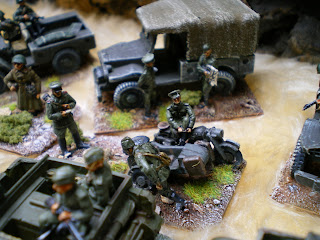 Some wierd SHQ figure doing something to his boot, while a Lammercraft NKVD man writes him a ticket
Lots more pics HERE:
http://s175.photobucket.com/albums/w138/christot2001/Russian%20Recce/

The bit of wargames kit I like more than any other 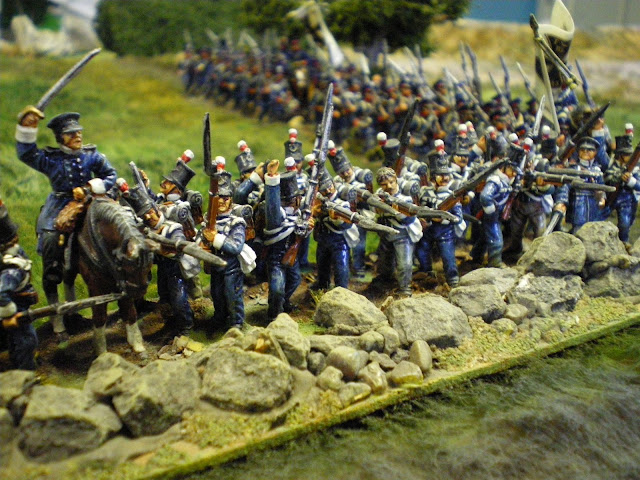 What is it in the above picture that I like most?
Is it the rather tidy Calpe Prussian reservist Battalion blazing away in the foreground?
Is it the Landwher regt boldly marching up in support?
Is it the way the rather nice Pentax I "borrowed" off my missus captured all this? (and she keeps asking for it back)

Nope, none of these things.

The Calpe figures are great, and I like the paintjob.
The bunny-fur they are on works really well.
The Flags are lovely, but its none of these.
Ok, I'll tell you what it is:

Its the low wall of grey rocks.
Yep.
The rather nondescript piece of incidental terrain. "Its ok" I hear you say...."But why is it so special?"
I'll tell you why I'll always treasure this little terrain feature:
It was made by Peter Gilder.

I've got 3 walls like that one, I've got nothing else made by the great man, nor do I have any figures painted by him unfortunately.
I never actually met the man. I spoke to him on the phone a couple of times and that was it. I only seriously got into 25mm Napoleonics in the early 90's by which time he had died.
I find it a little odd that I never met him.
The majority of my wargaming friends knew him from the WHC under his stewardship. I've been good friends with Mike and Gerry who are there now for many, many years. I met his widow, Doreen, when she would hand over massive bags of newly cast figures in exchange for toilet-roll sized wads of tenners (which, I'm pretty sure went straight down the bingo in Scarborough the same night).
I've heard countless stories about the man (yes, including all the dodgy ones) and the games he would put on.
I own thousands of figures designed by the man, I've played literally hundreds of games using rules written largely by him, on terrain at the WHC made by him.
I've built terrain, and wargames tables slavishly copied from his designs.
I've totally bought into the entire concept of Napoleonic wargaming that was his idea.
In the Grand Manner are more than just another set of rules, they are an entire way of playing Napoleonic wargames which in order to get the best out of them really require you to adhere to the whole deal. 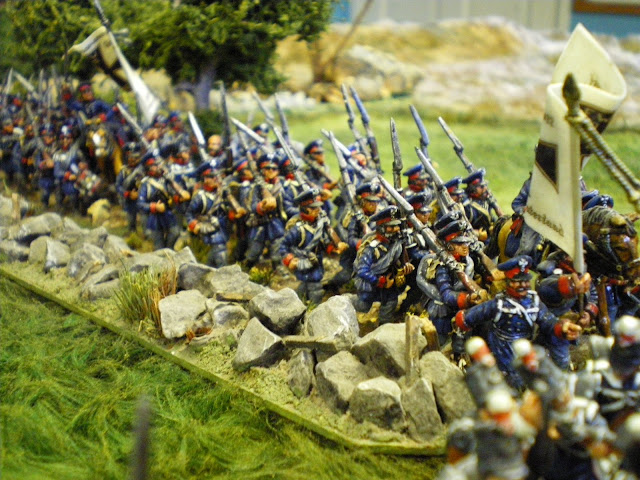 The wall, and some nice landwher

They are what they say on the tin:
"IN THE GRAND MANNER"
Yes, you can have a fun game with them with about a dozen battalions a side, on a 6' x6' table. Yes, you can play them with 6mm figures and you'll get a good game.
However, that really isn't what they are about.
They are about playing a game with THOUSANDS of 25mm figures on a truly enormous wargames table.
If you dissect them, then there are countless faults; The gound scale and ranges don't add up, if you had all the artillery models you should have then you'd get a terrible game, the infantry re-inforcing thing is pretty bizarre; some people whine about "theres no proper command and control".
However, if you play them in the way they were intended, as large, multi-corps, multi-player games they play out just like napoleonic battles.
Deployment is crucial, a corp in the wrong place can lose you the battle, the arrival of re-inforcements in the right place at the right time can win it for you. Occasionally an heroic unit can influence a sector. (Note to the whiners: You just don't get it, ...if you have enough units, on a big enough table you don't need command and control rules). The cavalry battles swing back and forth, dependant often on who has kept reserves. It all adds up.
I still find it pretty amazing that one man was able to work all this out, and was capable of visualising it, putting it down on paper, and getting the result he did.
There are other napoleonic rules that enable you to fight Austerlitz in 3 hours with 200 6mm figures.....go ahead, enjoy...but is that napoleonic wargaming?
Well, not to me it isn't. (Thank God)
To me, and an awful lot of other people, including those who push around 40 figures in a "napoleonic skirmish" (what is that by the way? a brigade action of about 3,000 a side?) the concept of Napoleonic wargaming that Peter Gilder created is the benchmark of what to aspire to.
I'd even go slightly further, in that I'm pretty sure he designed his figures with his rules in mind. If you take some Connoisseur (or Elite, for that matter, who have a direct legacy) figures and put them in a 32 or 36 man unit, then they look right. Individually sometimes they can look strange, add 35 of their mates and they look spot on. Put them in a 12 or 16 man battalion and they don't work. This might have been deliberate or it might have been sub-concious but its definitely true. Sometimes you can take other manufacturers figures which might be individually lovely but put them in a unit and they look dull, or clumsy or just wrong.
So, thanks Peter, thanks for the rules, the figures, and of course, most importantly; thanks for those little walls.