I'm making decent progress with the Austrians, even if I do say so myself. I've now finished 5 48 man btns, 12 skirmish figures plus this battery pictured. I've also done the guns and half the crew for a second battery.
On top of this I'm 2/3rds of the way through a sixth 48, which I'm hoping to complete this week/end, though it might be tight as I'm away for work for 3 days tomorrow.
Anyway,its decent progress given my 2 year timeframe for finishing this stage (this stage? Gulp!) of the Austrian army, puts me about a quarter of the way through the infantry which I reckon is pretty damm good.

Most importantly, the psychological aspect is fine too, I'm not remotely bored with painting white infantry, quite the opposite, and on the whole my technique is improving both in terms of quality and speed which is really encouraging. I even now look foward to starting yet another 48.
However, I'm not going to do that, once these 6 btns are complete (tonight!) I will start on some cavalry,probably a dragoon regt in white. I expect this to take a little while, I will replace the swords with pins and have to convert a standard bearer as Elite don't make one (havn't worked that one out yet, but it can't be too tricky). I'll also do a "how to" on the horses as I go. 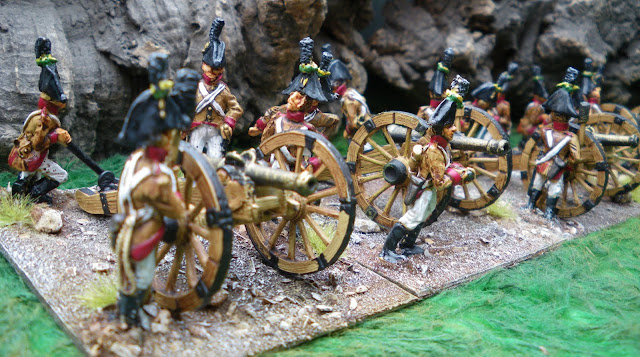 These guns are straightforwards to do. I went for a speed paint on the gunners which were a doddle. An evening's work for 8 (no muskets, no backpacks!).
I sprayed them with a desert tan primer, then painted the black plus grey highlights, washed the tan coats in burnt umber oils, did the flesh, washed and highlighted, facings in sienna finished in red. Grey/white belts and breeches which are then gone over in white. A few yellow and gold touches, and they are done.

The figures are half and half Elite and Connoissuer. I had about 30 gunners from Connoissuer sitting in "the Box" so I've just added extra Elite figures to bulk them out. I would have done seperate batteries but the pose mix of the Connoissuer stuff I had was a bit uneven so I decided to mix them. I think they look just fine with a mix any way. I have enough figures for about 4 x 4 gun batteries so they will become the 6Lber crews then the 12lbers will get all Elite crews. That is a little down the line though, I'll get these 6lb units done before worrying about that.