Prussian Fusileers and Austrian samples, plus a bit of a whinge

Calpe Fusileers form a firing line
Been a little busy, firstly, last week-end saw me going down to Newquay for a 1/285th WWII game, which was a great few days. No pictures I'm afraid, partly because it wasn't that photogenic (not that it didn't look good), partly because I was so busy playing I forgot. It was a Normandy scenario playing a 2 day game from midday on 6th June which then influenced a second 2 day game based around Goodwood. We were using the Newquay lads take on the Mega-game rules and on the whole they worked really well. Not perfect, but well-tailored to the games we were playing. Importantly, they seemed well tested and the OB's and scenarios were quite well thought out with clear, achievable objectives for both teams. One of those games where both sides could have gone away saying they won.
Just when one has memorised one set of WWII rules along comes another. The rule set for the Falmouth Mega-game in the New Year has just been put out. These are based on the same set as the ones used for the game I just played. Despite being largely similar I wish I had the same confidence in them that I had in the set I just used. I can't help feeling that they haven't been tested enough, and that based on previous experience the scenarios COULD become wildly imbalanced because of the marked disparities within the rules (and scenario specific rules) between the opposing sides (France 1940). There is always enormous ingenuity on the part of players in these situations to maximise their advantage and I fear the "new" rules and doctrine guidlines do virtually nothing to restrict this. I have a horrible feeling the only purpose the French team will serve is to serve as spectators while the Germans just roll forwards. There is nothing I can see in them which leads me to think otherwise, and that the experience for the French players will be distinctly mediocre. Lets hope I'm wrong.
This year the game has gone back to a standard sort of hex/map campaign format. Probably a mistake. Last year they used a more abstract system for the 41 desert campaign. This worked up to a point and if there was one game where it would have worked well and allowed the umpires to adequately control the games played it was the 1940 Campaign. As it is I have little doubt it quickly degenerate into a series of very dull walk-overs for the Germans, with a series of compensation final games based on fudges. They are still looking for a couple of players for the Germs so if you fancy winning for a week with no thought or ability required then sign up.

Back to more picturesque things, I've finished the Calpe Fusileer btn. A firing line pose, with of course, no standard. These were finished the same as the previous btns the only real difference being the black belts rather than white, strangely less satisfying to paint. Perhaps I'm just a white belts man. However the results are nice and the firing figures made a nice change.

So, although I still have another unit of Prussians to do I have made a start on the Austrians. I did these samples just to make sure I was happy with the technique and the results are ok. It's a little difficult to imagine what these will look like en-masse so I'll just have to persevere and produce a full 48 before making a final decision but I think I'm happy with the process. 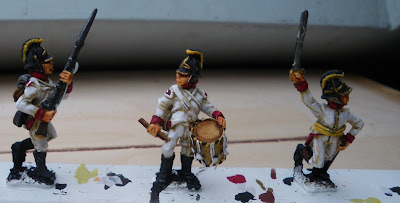 I went for Spraying white (what else?) then washing the whole figure in a thinned wash of Vallejo green ochre. Then block paint and highlight as normal with the white being done in white grey with white on top.

In the above picture the figure on the left is one of the new "Collectors' range" Austrians. I like the figure at trail. It has a seperate musket arm and there are 4 variants, I'll probably only use about 4 or 5 of these in a btn but with all the other variants available the unit should look really mixed. Not sure how much painting time I'll have in the next 2 or 3 weeks. I'm busy at work plus in just over a week its back up to the WHC for Herbert's birthday bash. Can't wait.