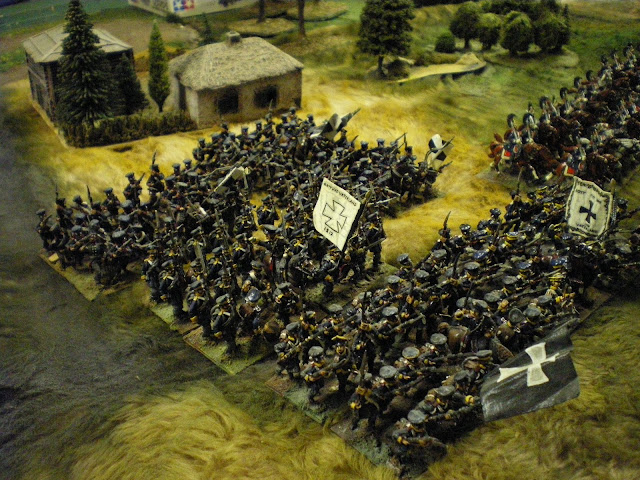 Having done two possible French lists, I suppose its only fair to do one for the Prussians (I would do one for the Russians and Austrians, but have no decent pictures to go with those)

In a way, the allies are a bit more fun. Smaller infantry btns, so a bit more flexible points wise, still the same range of troop types. The Prusskis can also have howitzer batteries which are pretty effective sometimes, plus 4 gun horse batteries. I didn't include any horse batteries for the French because they are very expensive, and 3 gun batteries are so very vulnerable, both to counter-battery fire and to being charged by cavalry. I've just seen so many ridden down over the years! 4 gun batteries are a different kettle of fish though, and they can REALLY dish it out sometimes. Few things frighten me as much on a ITGM battlefield as a well placed enemy 4 gun Horse battery, so I've put one in this list, despite the cost.

One thing you will notice is I havn't put in much landwher...Sacrilige I know in a Prussian army, but I just don't think they are worth the points saving...I'd rather have some good shooters. You could include more of them just to bulk out the infantry to get some more skirmishers,but I haven't done this.

Partly, the way I've chosen this list is from watching the way Herbert (probably the best ITGM player in the world) plays with Prussians. He tends to ignore the infantry up to a point, and utilise the ancillary stuff, doing most of the damage with skirmishers and artillery, while the cavalry just negates the French cavalry. Following that logic, I'd have only bought Landwher.

However, not all of us are quite as adept as Herbie, though its something I wish to try out in the future. 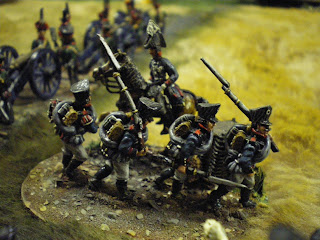 Calpe gunners on the march,painted by yours truly

(Apparently the corps commander is a freebie so the French lists should have an extra 50 points).

The basic infantry division is pretty simple, not disimilar to the French, but a bit weaker due to it being 32 man units rather than 36's

Much cheaper than the French divisions, but no cavalry, in Prussian styly I've kept them all brigaded together. 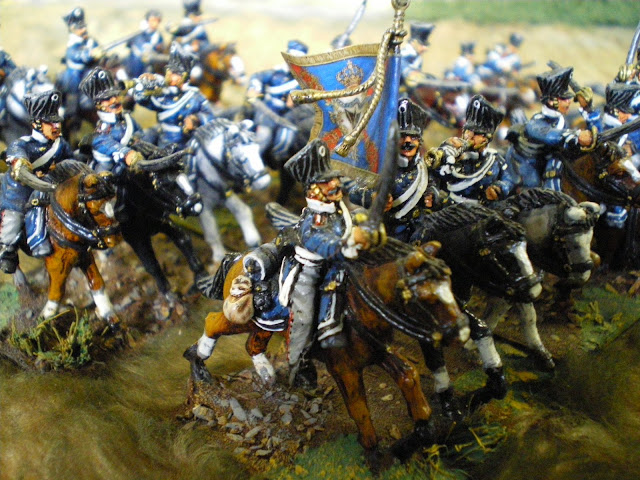 Calpe Dragoons, again my paintjob (I really need some more of these)

So you end up with a force that is probably weaker in infantry than the French, but has plenty of cavalry and really excellent artillery