Guard? Yes, I've got some, and incredibly, some of them are Old Glory 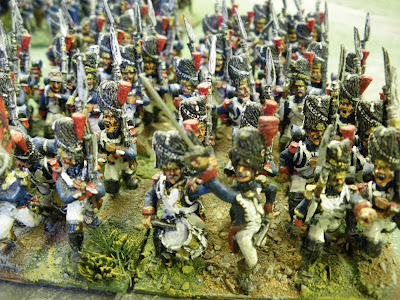 Old Glory make some truly horrible wargames figures, but, occassionally, they make some really good ones as well. I have 2 40 man btns of these fellows and found a bag containing another 48 the other day, so they are on the painting list. then I can use them as 4 x 32's or 3x 40's or 2x 32's and a 48...(you get the picture) 4 btns of Grenadiers should do the business ( Johns' got another 4, anyway) I didn't realise just how nice these are, LOTs of different poses, they are extremely animated, and VERY "shouty" which usually doesn't work with OG stuff, and is often their downfall, but somehow it works for these guys, some extra officers were required, from Connoisseur, (the Guard officer with his sword in the air is just such a great figure) plus a mounted colonel who is a Willie figure. 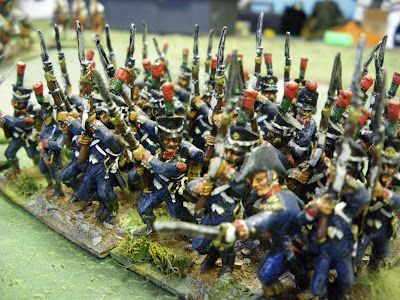 One young guard uniform I've always really liked is the Conscrit Chasseurs, they weren't around as a unit for very long; only from 1809 to 1811 but I always thought they looked "way kool" (as the young folk would say).
Very tricky to find figures for them, and in the end I plumped for Old Glory. I think they are Line light infantry flank coys. Again, light on good officers (Front rank and Foremost, this time), and a bit of a mental high porte pose but I like them. 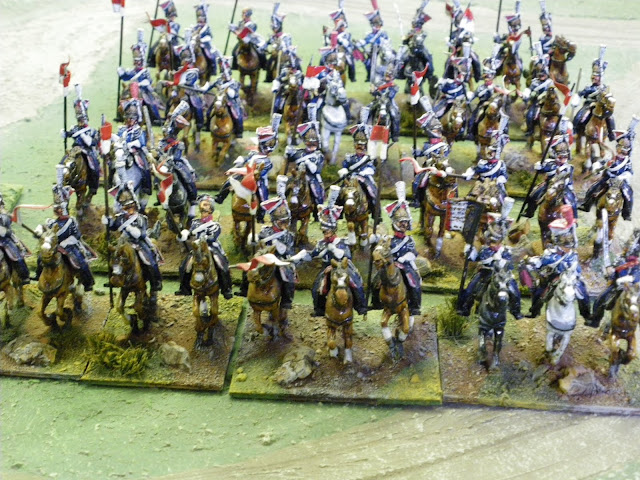 The final piece of Old Glory Guardsters is this 40 man regt of Polish Lancers, the heads are a little big, but they are quite sweet. The big advantage of OG is that the quality of the metal they use is rubbish...???...which means they are very easy to bend and perform head twists, arm bends etc. As you may have noticed I like my cavalry units to be as varied as possible, so this is a bit of a help. Also, they used to (not sure if they still do) have a policy of only selling cavalry in packs of ten. Which is frankly, pathetic. Who actually buys cavalry in tens? About the only unit it works for is, funnily enough, 40's of Guard under Grand Manner ( coincidence?), but for 24's or 32's its pretty useless. If...no, when, I do the Dutch Lancers, I'll probably use Elite, as the trumpeter figure drawing his sword is REALLY nice...although the Connoissuer ones are still lovely (and the Elite ones are a straight copy of them)
The only other OG figures I've bought are a load of their generals...they do HUNDREDS, so you can get all sorts of stuff, I painted a load up one time for Gerry...lots of Pussians and Russians.
Anyway, the next 5 days will be spent in front of the telly watching the final test and painting Victrix Italians, so I should have them finished over the weekend.

I've now finished the 5th Wurtemburg Battalion for Noel plus a foot battery, so before I embark on the final 6th unit, and maybe a cavalry regiment, I thought I'd have a little break and do some of the Victrix French I bought at Salute. To be honest, the other major reason is that I've run out of the right blue paint, so I can't do any more until that arrives (Don't worry Noel, its in the post).
When I'm doing new figures I'm not familar with I quite like just to do 6 skirmishers just to "get into" it. So, having finally plumped for painting these fellows as early Italians I knocked these out yesterday. 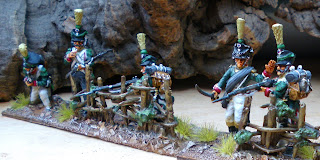 All in all I was impressed, the kneeling figure is a bit vague in it's detail around the back end but apart from that they paint up fine. One thing I did have trouble with was information on the Italians which suprised me, theres not a lot on the web and my own books were a bit vague and contradictory. In the end I used a lovely book I've had for a long time which has the prints from the "Otto Manuscript",most of the subjects are French but there are a few Italians, all drawn by an eyewitness in Hamburg in 1807. Ultimately this force will be about 6 line batallions plus a load of dragoons. Not sure about the Italian Guard but we'll get the line kit done first. I'm sure I will,as I think either Perrys or Victrix will eventually do French Guard infantry (which are right for Italian Guard)

Fancy grass from some German firm

So, I quite like these, I've already started on the first line btn, (the fusileer figures are actually easier to paint). I hope to have them finished next week or so, though I'll have to wait for the flags from GMB.