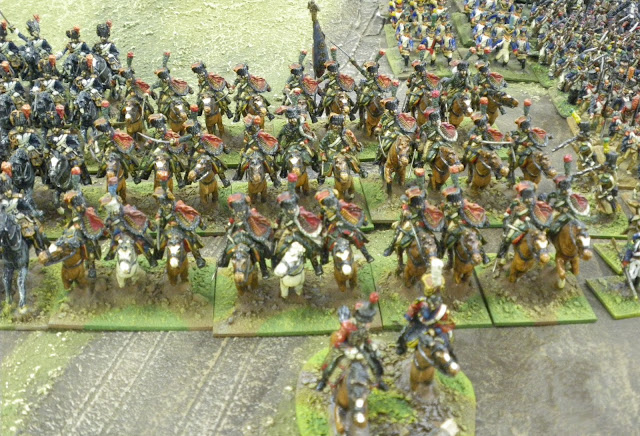 At the beginning of the month I made the trip up to the WHC for Gerry's birthday game, as I said before, a bit sad, as everything is going to close there and move to Basingstoke for next year. The event itself was however as much fun as it always is, thanks to all the players and of course Gerry for putting it on and Anne for putting up with 10 hungry gamers all week.
We played 3 games, an Eylau scenario which saw me playing Davout with a flank attack being faced off by Gerry who led me a merry dance fending off my infantry with repeated cavalry charges and lots of his pesky light infantry units ....I wasn't a huge fan of his new light infantry rules before and I'm less of one now!...to be honest, I don't mind the rules themselves but its the quantity of the units he is employing that I feel is colouring the game. The odd btn here and there would be fine, but with some formations having 3 or 4 of these each they can dominate. I don't think the staggered bases add much to the visuals either.
That said, we had a great time, so who cares? 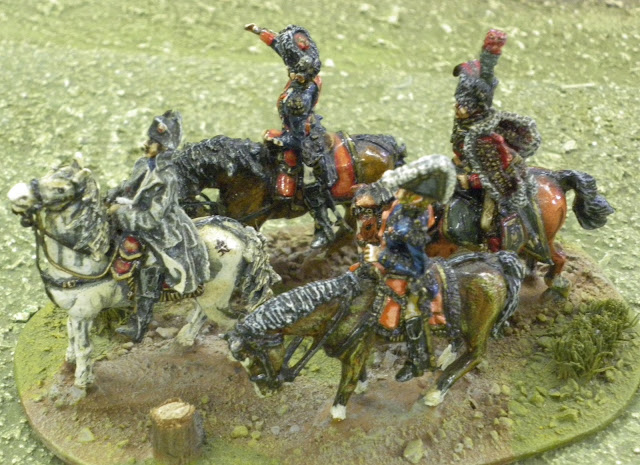 Game 2, Friedland, saw me battering away at Herbert, quite a relaxed game. He wasn't coming forwards into my massed Russian gunline and I wasn't going to far forwards into the minefield defence he'd set up around a village. He had to wait until my flank was threatened and the position unhinged by (wait for it) copius quantities of Light btns romping through a wood on my right. Then I had to fall back slowly but he didn't have the strength to press his attack. The French weight was elsewhere on the other side of the river.
The final game was an 1813 "what if" - Spremberg, a normal game without the light btn rules etc, to be honest I enjoyed this the most despite the fact that we cocked up our deployment and had too much cavalry in the wrong place (in front of a redoubt, - although we didn't know it was there). Nonetheless we had a fine game. 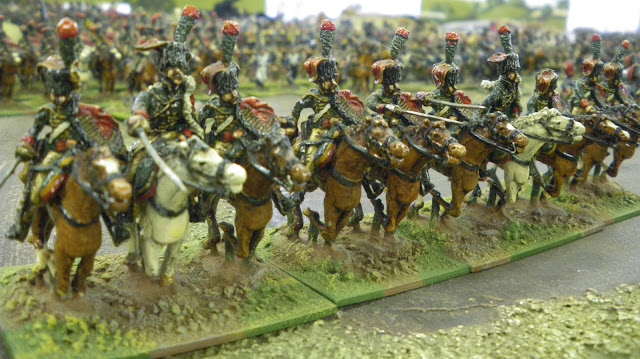 A biggish project prior to Christmas was going down to the new WHC at Basingstoke to see Mark Freeth's new set-up..well, at the moment its a big, airy, empty unit! Not strictly true after me visit as I dropped of a very full van load of timber in order to help mark build the all important tables. I've volunteered my rudimentary carpentry skills to help him and we are going to start building in the new year. Should be pretty straightforwards but blimey, do you need a lot of wood!
He finally has his website up and running so I said I'd pass it on here to any of you avid readers who hadn't seen it
http://www.wargameshc.co.uk/
All sorts of stuff in there, lots of pics (some taken by me!) and info on the fairly packed programme he has prepared for 2011.
So, if any of you fancy a big game weekend he deserves your support, I shall certainly be able to get over there more often in future. I timed the drive, door to door is less than an hour from West London! Big difference to the five hours each way to Scarborough.

Last, but not least a quick word about the photos, I realised I have no pics of Napoleon on this site....Now I thought that was a bit remiss considering the majority of stuff here is "Napoleonic". So a pic of him and his staff and naturally the accompanying regt of Chassuers to go with him. Mostly Connoissuer figures with a few Surens I think- all painted by Doug Mason and now all about to move from Yorkshire down South.
Anyway, Happy New Year to you all.