What's next? ....LOTS of milkshakes

Wurtemburg Jaeger: Connoisseur figures
So while all this Vittoria stuf has been going on I've not been idle.
Got a bit of painting done, finished the second battalion of Victrix Italians which was good, then polished off a dozen skirmishers for Noel, someof whom can be seen above. I also wanted to do some conversions to create a Wurtemburg Horse artillery battery. No-one to my knowledge makes figures for these, but I thought some Russian Guard Horse artillery gunners with Firing Line cavalry Rapenhelm stuck on them would work. The results are below: Quite a cute little battery. 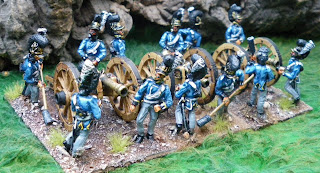 Wurtemburg Horse Artillery. Connoisseur Russians with Firing Line heads
However, the major development of the past couple of weeks has been the decision to build a big old Austrian army. I've been thinking of what to do for my next painting project for a while, and hadn't come up with much. I had contemplated Austrians a while ago, along with maybe a Big French Guard project...but French Guard? I've got tons already...then I saw that Pete Moreby at Elite was doing his "Christmas Special" offer. I did a few sums and worked out that purchasing 6 of his Brigade packs meant an overall saving of about 30%. Pretty good. SOOOO... I got together an initial (initial....blimey) order for about about 1200 figures. This will form the core of an Austrian army. 16 x 48 man infantry btns, 4 x 36 grenadiers, 3 regts of light cavalry and 84 skirmishers. The skirmies I've ordered are mostly Grenzer so I should be able to make up 2 x 36 man btns out of these. I just happen to have a load of Connoisseur Austrians lying around in a dark corner; Enough cuirraissier for 3 regts (!!) about 100 Grenzers, about 30 gunners and more artillery pieces than I will ever need ( about 20 guns) So I've ordered a few extra Elite gunners to be going on with and can pad out the Elite Grenzers (which are lovely figures) with some of the Connoisseur stuff.
I've asked for the units to have as much variation as possible, including all the "variation packs" plus 4 of the 48's in helmet are the new collectors series which look really good. So by the time I've mixed them all up they should look extremely varied.
I reckon this little lot will keep me busy for 2 years, I might be able to speed things up. Austrians are actually pretty easy to paint, no piping, simple uniforms. I've laid in vast quantities of varying shades of white paint.
Now, the trouble is this week I'm "working from home" (cough), so I'm already in a state of nervous anxiety everytime I hear a noise which is vaguely like a postman/delivery man...I do feel a bit sorry for the poor old postie who has to deliver this- as at a rough estimate it should weigh over 20 kilos!

Got to love the statement that 1200!!! figures forms the "CORE" of your Austrian army.

I do not know where you find the time.

It is a lot, and I'm not so naive to believe that in 2 years time there still won't be some of these figures unpainted. However, what I've managed so far this year (10 months), is about 550 pieces, and thats with a 3 month period of painting nothing at all, so on that evidence it's do-able. The important thing is to retain the impetous, and not get distracted.

painting that many line might dampen your enthusiasm... might be tempted to ship them out to Neil Keneally, if the budget will stretch...

Too think, I was whining about painting my meager 500 figure force - what a piker I am.

I should order any Vallejo paints I need before you snap up the existing supply to cover your new horde.

You are a man after my own heart. That sounds like something that I would do: order 1,200 figures of anything.

I have 800 Dave Alsop Old Glory Russians that I bought in bulk circa 1992 for my 200th anniversary of Austerlitz game. That project got derailed onto the back burner, but I did get about half of the Ruskies done, except that they were the Elite figures. I still have the Alsop figures. Now that I'm going with a 1:10 ratio Russian army, these figures will get new life as my new Russian army (I sold the old one). With all of the cavalry that I want to do, I am getting close to your 1,200 figure. Two years sounds about right. Good luck on your project.

I am in awe of your productivity and ingenuity Sir! The conversions to make the Wurtemburg horse arty came out very well. I note the new boxes of Perrys cuirassier have carabinier crested helmet variants as well - plenty of heads for conversion. be interesting to see if they match in OK. The one set I'd love to see made is Polish horse artillery limber and riders in czapka. Fat chance of that happening though - and I can't see opportunities to convert like you've done with the Wurtemburgers. Great site, wonderful figures.

BTW - there's nothing naive about having unpainted figures around after all that effort - any serious wargamer worth their salt is supposed to have their body weight in unpainted lead at any given time, aren't they?!