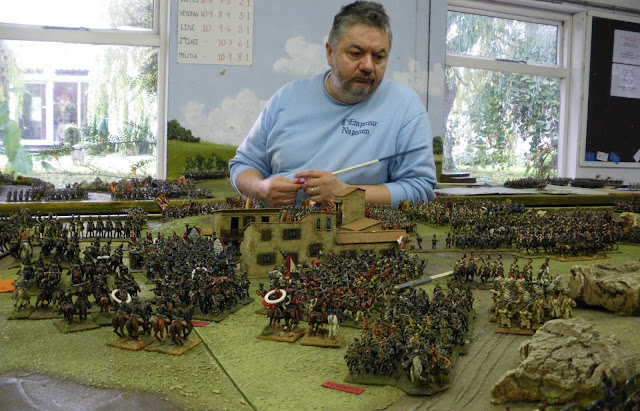 The man without whom all this wouldn't have been possible: Gerry pondering on how to inflict further carnage.
Having examined the terrain and OB's, before going any further I should take this opportunity to thank Gerry (and Anne) for inviting me up to their's to play this game in the first place. Gerry and I had a great time on the table but an equally fine experience was to be had off it; some excellent dinners, and a lot of tea...and beer,.... and wine...I had a splendid time, all due to their unstinting hospitality, so many thanks, it was much appreciated. 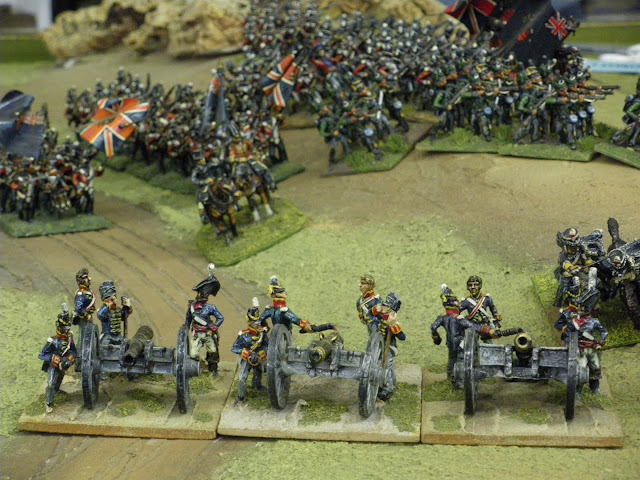 9lber's from Alten's division pound Cassagne's infantry. KGL move up in support. (Connoisseur figures from the WHC)
The opening few turns of the game were fairly cagey, the only Allied troops deployed at the begining of the battle were the Potuguese and Spainish units and Dalhousie's division on the west side of the Zadorra. The 3 British cavalry brigades made an aggressive move to quickly cross the river in the south-western corner of the field While the infantry steadily moved up to the river line. There was desultory counter battery fire from both sides.
Having gained some inteligence by examining the troops on the allied side it was quickly obvious that the British would be one's delivering the flank attacks. I threw a couple of battalions out from Arinez plus the divisional cavalry to spoil and slow down the British cavalry. On the north western flank I extended the French line by moving half a dozen battalions to meet the Spainish threat there. The other moves meanwhile were to move the French cavalry ( Tilly and Soult) down to the Arinez area to counter the British cavalry. Meantime the 12 pdrs moved off to support the northern flank, planning to take up position between Maransin and Cassagene and form a hefty gun line in that sector.
D'Armagnac and Boyer remained in reserve.
This situation continued for 3 or 4 turns while the British cavalry attempted to ford the river and the French Divisional cavalry extended the French lines to the south, they were in for a shock however when two and a half divisions (Stewart, Cole, Ponsonby and Longa) emerged from the hills on their flank.
I started to shift further forces south from the Tres Puentes area, this looked pretty solid against the Spainish and I didn't need all of Laval to hold it. The attack against the Spainish was going moderately well.
The French were holding their own in the artillery battle and both sides skirmishers were popping away over the river. The Portuguese were taking a long time to cross.
Meanwhile the roads were clogged with fleeing baggage moving east. 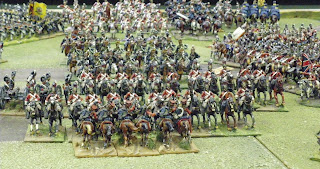 "SPLAT" The Speedbump hussars meet the Horseguards
This situation continued as the British cavalry formed up, there were a couple of minor skirmishes as Soult's hussars moved up, which the French lost, meanwhile the British infantry poured onto the southern flank.
The firefight against Morillo's Spainiards was going well, a couple of dodgy morale rolls and soon most of the division was in retreat. The French were having trouble chasing them.
None of this however could do anything to impede the British cavalry. Tilly's Dragoons couldn't get into the sector in time and took up position east of Arinez. It was down to Soult's Lights to do the job...no chance. They were ridden down in short order by the British Heavies, a couple of fleeing squadrons pinned a French line firefighting Dalhousies' infantry as it crossed the river...this wasn't good, The line and a another supporting unit were charged and broken through by the rallied British cavalry. Suddenly there was a minor crisis developing west of Arinez. 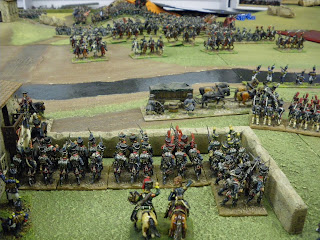 Cassagne's infantry occupy a farm. Figures are the fantastic original Dave Allsop Old Glory French....Never bettered
Still the Portuguese made no headway, but that wasn't really their job, they were just there to pin. The artillery and skirmish battle continued unabated while Laval's infantry struggled through the baggage to get to Arinez.
Then, around turn 7 came the next British blow. Another two and a half divisions appeared on the northern flank. D'armagnac moved up to counter this and the French formed a solid, (but thin) line supported by 4 batteries of artillery along the river line.
This was then followed by ANOTHER two and half divisions including the Light Division pouring out of the mountains north of Vittoria, The French were seriously outnumbered here.

British cavalry mass before the 12 pdrs on the northern flank. They were cannistered down in droves
This was the situation as the game reached turn 10 to 11.
On the southern flank, the British were building up a solid line to assault Arinez with the French heavily re-inforcing the area east of the town,cramping the British deployment with Sarrut and the dragoons. Lamartinerre was slowing moving up to support this,hampered by roads full of baggage.
Arinez itself was under shrapnel fire with a number of Daricou's btns massed behind the village. To the west and north of Arinez was a sorry tale. The charges of the British cavalry had cut down 2 btns plus a lot of cavalry, 3 (untouched) btns were routing back and had carried off a battery. Daricou's units were huddling in square waiting for these to clear and then rally.
Fortunately the British had nothing to immediately exploit this, but the situation wasn't good.
On the western Zadorra it was business as usual with the Portuguese doing the hokey-cokey back and forth across the river.
To the north-west the Spainish were hard pressed but this was really a side-show.
Further along the Zadorra to the east D'Armagnac was wheeling into the left of the line to face off Bradford. This was a stalemate for ther rest of the battle.

Maransin's infantry deploy, my small contribution: Perry and Victrix
Maransin with my little Perry fellahs was firefighting across the river and doing ok-ish, but even by rotating the btns as they were worn down, it was obvious the French would run out of units before the British.
The same situation was developing (but faster) in Cassagne's sector. Here btn after btn was fed into an uneven firefight with riflemen, the Footguards and a cannistering RHA btty. Both of the latter were eventually seen off but at a high price. The French were simply going to run out of units.
On the eastern end of the battlefield the strategic axe for the British was falling in the shape of the Alten and the Light Division. Alten was gunning down the Spainish Guard infantry while the LD raced towards the exit road supported by the KGL cavalry. I don't think they actually fired a shot all game apart from the odd skirmisher, but they were descending onto the exit road at a rapid rate and there was nothing to stop them apart from a few squadrons of Spainish Guard cavalry.
The writing was very much on the wall for the French at this point. 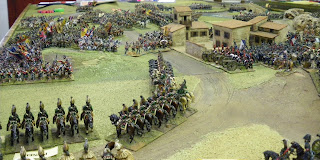 French Dragoons get on the flank of the highlanders. It was about to get messy for the Black Watch
There were isolated areas of success for the French; Against the Spainish things were going well, and the btns facing the Portuguese were dishing out casualties. Around Arinez a few British btns were getting worn by fire, and pinned by repeated dragoon charges. Eventually one of the highlander btns was caught in the flank and ridden down along its length, while the other 40 man was shot to bits, as were a couple of British squares. However, the occasional British rout never evolved into a whole-sale series of routs although it easily could have done.
The damage was done to the French on the Northern flank. By the end of the game the French were wavering, they simply couldn't cope with the fire combination that the British could bring down on them. 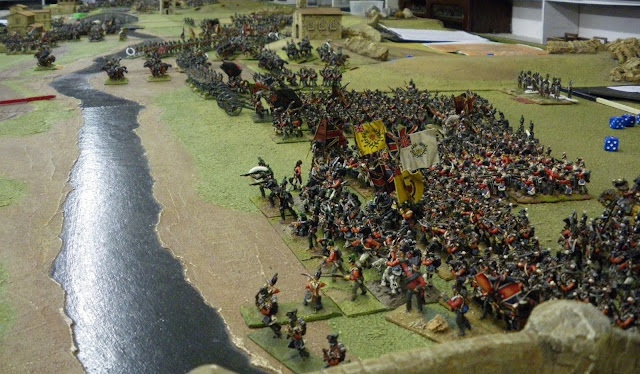 Picton Volleys his way to the river, and takes up the slack for the British. In the background the battered Footguards retreat
All in all it was a highly enjoyable couple of days. Its not often that one gets the opportunity to play a one on one game on such a large table, and with that many figures (It was being replayed last week as a 3 a side game) and going it alone in such a scenario, is a bit different. You need to remember A LOT of stuff, the challenges are slightly different, and the simple physical side of moving around a large table (or series of tables) is a bit tiring. A straight-fowards line 'em up scenario would probably be easier as a 2 player game, but its a small point.
As a scenario...hmmmm ... Apart from Bautzen I don't think I've played in such a one-sided game at the centre. The Brits really do hold all the cards. Not helped by playing against Gerry who is not exactly a bad player....In terms of player pyschology Gerry as an opponent is hard to beat at the best of times. His only "weakness" (if it can be called that) is that he likes to generate a plan, then get "all his ducks in a row", and then execute it, so sometimes it's possible to throw him off balance (except he has usually taken your moves into account). The trouble in this game was that there were few (no) opportunities for this.
Anyway, anyone reading who has managed to get this far, and has enjoyed this lengthy account even a 10th of how much I enjoyed playing it, should be happy!

I remember that serious contempative look on Gerry's face. It means that all Hell is about to break loose on you. It brings shivers back to me as I recall him running off two of my corps at Austerlitz, circa 1994.

I think that one plays the French at Vitoria with the mindset that they are going to lose 9 out of 10 times and they hope that they can make it as hard as possible for the British.

What do the white rings on the cavalry indicate? Does this signify the loss of an officer in the unit?

Excellent battle report Chris. I've never played Vitoria at the centre, as Fritz says it's a real tough one for the French, but then again think of the glory had you won!