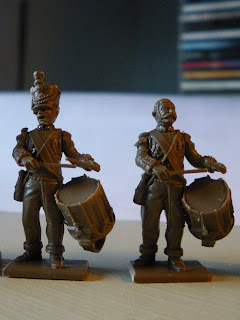 Two Drummers, just different heads
At Salute a few weeks ago I impulse purchased a box of the new Victrix french plastics. So last sunday I put some together.
Hmmm ...compared to the Perry plastics they are fiddly, it took me at least double the amount of time to put together a 36 man unit. Seperate heads, arms, weapons backpacks...However, the end results are probably worth it, theres a lot more life in these chaps than the Perry figures, and the sculpting is bloody marvelous. Above is one basic drummer with just a head swap, no problem having these side by side on a command stand.
The range of heads is mental! I think there are 108 different (not ALL different, obviously) heads in a box, so the variation possible is enormous. 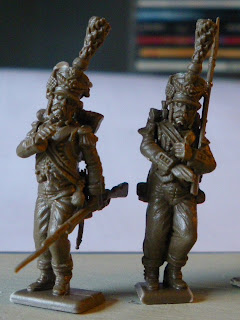 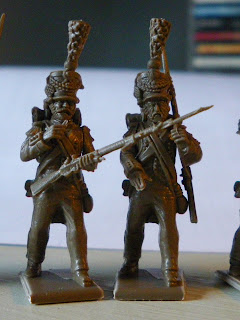 Voltiguers, again, same bodies, diferent head/arm combos
The two pictures above are for the voltiguer company. These chaps are impressive. From the toe to the tip of the plume is about 44mm! Toe to eye is 28mm (of course)
Each picture is using the same body with different head/ arm combinations.
At £20 for 60 figures they are dirt cheap, there is a bit of a shortage of flank company bodies in a march pose (only 12) so in order to get more than a single battalion out of a box a bit of imagination will be required, but one could use 36 figures and bin the remainder and still be in the money. I've not investigated the kneeling body yet (8 of them in a box) fine for the odd skirmisher, but generally useless. There are, however, 8 officer bodies, which gives a bit of a surfeit which could be used with the Perry kit to remedy the paucity in their box..Yes, yes I know, "The Perries are in 1815 and these are in 1807 uniform, You can't possibly use them together"......Yeah, Yeah... whatever...., just watch me, and while you are about it ...Go and get a life!
There was some twat on TMP the other day banging on about how the Perry plastics are useless unless you only do 1815 with them (???)..I questioned him on this and asked whether he had seperate armies for all the different uniform variations the French had. He replied that he had. I wonder how big his collection is? 100 figures? 200?...even a 1,000?.. I'm sure he loves playing meticulous games with small amounts of figures....me? I'm a size queen..(just like my missus!!)

Hmm.. despite my natural prejudices against plastic figures I have to say these do look the business. Then again once you pick them up......

those guys look awesome! Can't wait to get a box or two to mix them with my plastic Perry French.

Noooo! Otto! you are NOT allowed to do that! I'd have to report you to the Napoleonics police!