Blog interaction!
I've read Noel's recent missive concerning his planned campaign http://garagegamer.blogspot.com/ and so I thought I'd see what my choices might be (and why) for a points based ITGM campaign. (I'm not playing in Noel's campaign, this is just an exercise)I'm not a big fan of points based games, but this is one way of geting a decent compromise, rather than say "My 4,000 pts of French are fighting your 4,000 points of Prussians, each army has to be capable of taking on multiple opponents, I'm not sure if the possibility of multi-corps games has been considered, but thats how it could get really interesting. 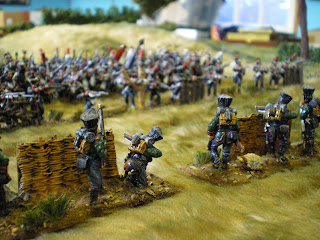 Skirmishers: They are worth the points
I was involved in one years ago and I seem to remember a few things, namely that while Peter Gilder was a genius, it didn't extend to writing a points system. There are a few anomalies: Skirmishers are a bit underpriced, and at 1:10 for formed infantry if you maximise their numbers they are very (too?) effective. Lancers are a bit overpriced, as are horse artillery. 2nd class line infantry are a bit of a bargin. 8lb artillery are generally not worth the money, while 12lbers most certainly are! 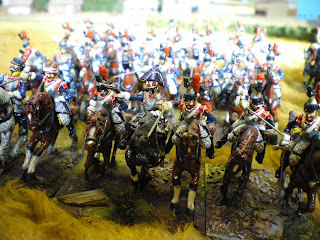 Cuirraissier, are they worth the points?
Given those thoughts I decided to do a little exercise and produce my own points army as per Noel's criteria.
The brief is to produce 3, 4,000 point corps. The only proviso is that a division can't be smaller than 5 btns. I thought I'd start with the French, although a lot more fun can be had with the allies.
For this first corps I haven't been too mental and stuck to vaguely believable forces, I may later post up a "cheese corps" for maximum effectiveness.
1st Division:
Div CO= 50
1 x 36 vets= 108
5 x 36 1st class line=360
2 x 36 2nd class line=108
18 skirmishers = 90
4x6lb+1 howitzer = 130
Divisional Total= 846
My reasoning for this is as follows:
8 btns is a nice little number fo a Div co to keep in range, having 1 vet btn to contest a wood or get into firefight is always handy, the 2 x 2nd class btns can skulk about at the back (these 2 pay for the veteran). 6lb artillery is good enough, (unless you know you are up against 6 rank Austrians, 8lb's aren't worth it) 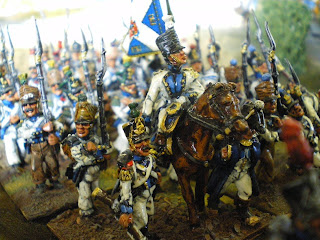 Gives us a total of 4,004 points.
That would do for my first Corps.
A solid infantry base, plenty of artillery, some decent cavalry.

Interesting choice of troops Chris, we have six different Corps at the moment and the variation is surprising. However, like you they've each gone for a 12lb bty. I'm one of the umpires so I haven't done one myself but it looks like an interesting excercise so I think I'll have a go.