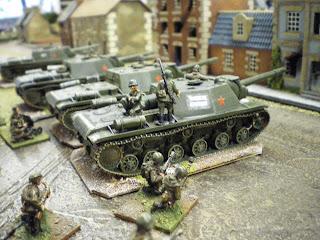 Sorry I've not been active here (what percentage of blog posts begin with that sentence, I wonder?). Been a bit busy with Premiere stuff for the new Bond film, during which I managed to break a finger, which is not terribly condusive to typing. Although actually, seeing as it isn't either of the 2 fingers I use to type with its not really a problem. So I bring you this despite the pain.
Anyway, last weekend saw me going off to Scarboro for another try out of Gerry's WWII rules. It was a vaguely 1944 Russia scenario, as he wanted to see what a few later tanks would be like. All the games we have done previously have been 42/early 43 with mainly Panzer III's vT-34 76's so this was upping the ante to bring in T-34 85's against Panzer IV H's and Panthers.

I took up a few figures for a day out at "wembley"... A Infantry Regt for each side plus some Soviet armour and a load of pak 40's (Gerry didn't have enough!)The scenario was for Russians attacking a big town, and it was a big town, about 12 feet by 6 in the centre of the table, with plenty of room on the flanks for armoured action.
The Forces were 2 good quality but weakish Panzer divisions - (10 infantry battalions, 4 small tank battalions, plus Stugs and Marders. Up against 5 of what Gerry calls Tank corps but are way too weak in infantry, basically 15 T-34's plus a regt of infantry, should really have double the quantity of infantry, although the soviets did have quite a few extra units; a couple of RECONNAISANCE (for John)btns, 2 heavy assault gun regts, and some T-70 light tanks (not sure what they are still doing running around in 1944, but, hey). Gerry is basically a lazy bleeder and needs to get his Russians sorted out.
I ended up defending the town (thanks) with a single German infantry regt plus 5 Stugs while the others ponced about on the flanks with all the good stuff. 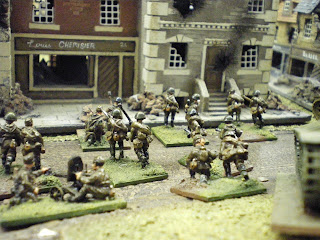 Whc infantry assault the first line of the city


As it turned out it was too tough for the Russkis. It was easy for them to take the first line of houses. I just sat and waited, gave them a volley when they got close and then pulled out to my second line. The problem was it was difficult to repeat this for them without getting the Su152's into the town, and I had the entrances well covered by Stugs and At guns in positions which enabled me to get flank fire. They tried a couple of armoured assaults into the larger gaps but these were repulsed. 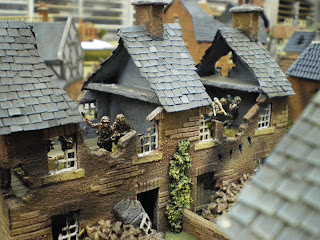 My Grenadiers lurk in the second line of buildings


The Russians then ran out of ideas and milled about outside the town (hiding behind their own smoke screens, which sort of sums it up) when frankly the armour they had there would have been better off employed on the flanks, where they were getting mullahed by the Panthers. All in all the Russians seemed a bit timid, didn't get their act together combining artillery with their attacks (vital, in the rules) Meanwhile their infantry hid in the first line of houses. Because they made no headway on the flanks, they couldn't get anywhere in the town and vice-versa. More aggression needed. In the end, I guess my losses tell the story: None.


I had a single hit on one Stug and one of my infantry battalion commander's got mortared when he strayed into a garden for a fag and was spotted. 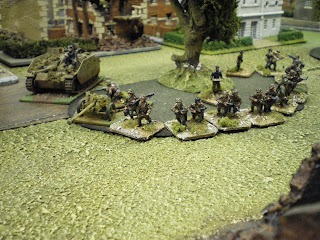 More Grenadiers and a whc Stug defend a town square
On the flanks the Russian got shot to bits, although it wasn't quite as one sided as it looked at the end of the game, as nearly all the German tanks were in pretty poor shape. One last push and the Russians would have got some joy (maybe the 15 T-34's that did FA around the town?)
Anyway a good weekend and a good tryout for the rules.
There was a good feel to the game, with the potential to keep and manouvre reserves, with the focus of the action shifting from different company sectors- it sort of read like a account, which is probably a good thing!
Posted by Chris Cornwell at 11/02/2008 08:23:00 am