This is partly what re-kindled my interest in the late 15th century. It’s become extremely popular over the last few years - in no small part to the fantastic plastic and complimentary metal ranges put out by the Perry twins. Trouble was, the wars of the Roses never quite did it for me. Seemed a bit dull, but what was going on in Europe at the same time always appeared much more exotic. So where to start? Burgundians were a logical choice, many, many years ago I spent 5 years living in modern day Burgundy, in the environs of Dijon, so I had a slight affinity with the area, and had spent plenty of happy hours clambering around castles and fortified chateau that still grace the area. So Burgundians it was. The vague and not terribly joined up plan, being that Burgundians meant Swiss, which could stretch into The wars of Burgundian succession, and then into the early Italian Wars. Like I said, not that joined up.
Anyway, here are a few pictures of the Burgundians so far. Mostly Perry and Foundry, with a few Steel Fist 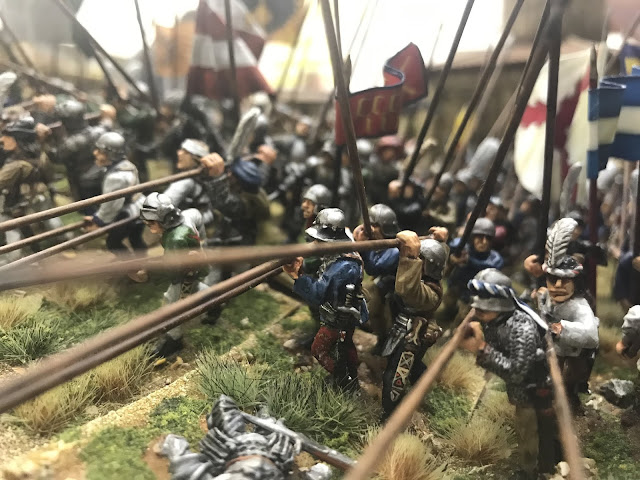 This is looking very pretty.
Who are you playing?
Which rules rock your boat these days?
Back in the day it was WRG, Tercio, possibly even Gush?
Have fun, best wishes,
Jeremy