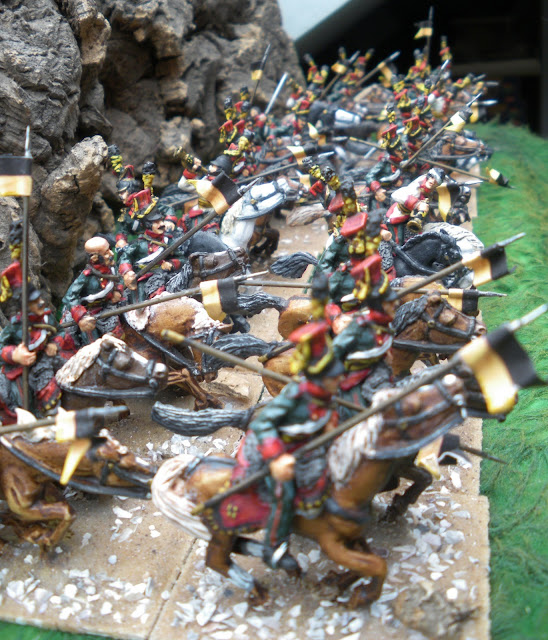 September has been a fairly hopeless month in terms of gaming, painting, and blogging I'm afraid. So, just in case you thought I'd jacked it all in I'll put up some pics of the Austrian lancers I don't seem to be able to finish.
Elite figures and horses with a few mounts from elsewhere (Connoisseur, Alban, Firing Line).

Bases obviously not done yet, still awaiting painting, brushing and grass bits. So far I've just done 32 out of what will be a massive 48 man regt - 8 squadrons of 6 figures. I picked the the third regt as I liked the red Czapka, plus the trumpeters apparently wore white ( though I've had trouble confirming this). Plenty of conversions and head twists, plus a few replacement heads from Firing Line. Lance pennons by GMB. There will be a standard bearer, although I'm not sure if Austrian light cavalry actually carried them in action. All the lances were soldered, and the officers sabres replaced. I also played about with some of the horses, teasing out manes and tails with the soldering iron to give them more movement. In the end, however, I decided life was too short. I might do this again for officers and the odd special, but otherwise.No.

I hope to get these finished this week, I guess I've had a bit of mid-project blues with the old Austrians. It will pass.
I have also decided to give these chaps their own staff officer - seeing as they are such a big unit. I found a lovely Bicorne Uhlan officer, and I've tweaked him a bit- changed his sword arm, added a steel sabre and soldered a "flying" scabard onto him, again to impart a little movement. I'll post him when he is done.
Free Counter

These are superb even in there almost complete stage!!

I thought I had it tough with 30+ Russian cavalry regiments.

Look forward to seeing them all finished off, very inspiring.
Cheers
paul

Is the saddle cloth motif something you thought up or does it have historical basis. Also I like the white coated trumpeter.

I was saddened to hear about the closure of the WHC. I went once back in the late 1980s and loved the experience. Indeed, although I long ago left ITGM the fundamental basis for all my gaming whether terrain, painting style and ambition to do games in a spectacular fashion derived from Peter Gilder and the pictures of the WHC collection. When Gilder died I felt a piece of my wargaming inspiration had died too but the WHC kept that spirit alive. Now with the WHC going I truly think that an era is ending. Don't misunderstand me, there are lots of incredible things going on in the hobby and others, like you Chris, are providing tons of inspiration, but its origins for me faded just a little more.

Chris, any news from Gerry about the WWII rules? Or has that project been shelved?

I cxan answer that one myself. The rules are done and will get published early next year. There will also be a Yahho Group site for the rules. Its taken so long because I am building the new "Wargames Centre" from scratch which will have a slightly bigger playing area then the WHC.
I will be going to 10mm and already 32,000 figures are on order.

If you have any questions, surprises or whatever, you can follow all these developments on my blog at http://www.gerryjelliottsituation.blogspot.com/
I'm sure Chris won't mind the plug.

Lastly, the Uhlans are the 3rd Uhlans, Erzherhog Karl, raised 1809. Indeed the trumpeter did have a white tunic.
The 2nd Uhlans, Schwarezenberg, had a green Czapska and were raised in 1798.

Chris - they're great figures, a tremendous amount of movement and animation in the figures. I like the czapka-less ones too, particularly the trumpeter. Look forward to seeing the Archduke's Uhlanen in action on the table soon!

Thanks for the news about the WWII game Gerry. Also, I am pleased to hear that the spirit of grand manner gaming will continue. Although I am a dyed-in-the-wool 25mm gamer, if I did another scale it would be 10mm too. 15mm seems a nightmare to me -- too much detail to ignore when painting, too small to see it when on the table. Are you using OG?

I suppose that you will use 10mm for WWII too? Would make sense. Really looking forward to seeing how all this unfolds.

Chris, it looks like the 25mm grand manner mantle shifts to guys like you and the Garage gamers. We play massive battles in 25mm with Shako. Small units but far more of them than WHC scenarios. Looks great, but not the big battalions which have a character all their own.

Good to see you're back in blogging mode, and the uhlans do look pretty special. I've ordered a soldering iron and a modelling drill from Santa so you may have to do an article on conversions.