Calpe Landwher battalion
I'm still waiting for these pesky Austrians, 5 minutes ago there was a knock at the door, I lept up, raced downstairs (almost breaking my neck). What was it? Some geezer flogging home deleivered organic meat. Not much use to a vegetarian household, certainly a lot less useful than a big box of toy soldiers.
Anyway, the excitement engendered by my waiting for these figures has given me a shot in the arm as far as painting goes. The last couple of weeks have been incredibly fruitful. I've banged out some Connoisseur Austrians in readiness to be joined by their Elite comrades (60 artillerists and Grenzers). So, this weekend saw the paint table empty.
What to start on? Now it would be Sod's Law that if I started something major like a couple of btns then these flaming Austrians would turn up half way through. In the end I bit the bullet and decided to try and finish the 4 remaining btns of Calpe Prussians I have, which have been sat in bags for about 4 years.
First off was the last Landwher btn, now with half an eye towards the impending Austrians I decided that speed was something of an issue. Not to the extent of compromising too much, but I wanted to try techniques which might cut a little time. To be honest, in the end I didn't really change much at all. 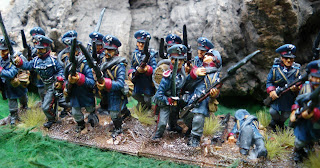 Casualties: not something I normally do
I also did something I've not really done before and kept an eye on how much time this was taking.
I did these in batches of 16, 8 to a stick, trying to keep each stick with figures vaguely similar in pose, I find this makes things a little quicker as you can develop a "rhythm" of sort.
I decided to use the prime/undercoat as a basis for a major colour. Once upon a time I would undercoat say, grey, and then spend more time painting the grey....well, grey...A lot of painters will be throwing their hands up in horror at the idea of using a prime coat as a "finish" coat, but by the time you have washed, highlighted and varnished, there isn't a lot of prime coat left.
I read someones painting tips the other day and they said they undercoated black, and then painted the whole figure grey...(????) and then painted the figure...well, it's their life..Personally, these days if a figure is predomitably grey I just spray it grey, likewise if there is a lot of black. I'd do it black and then wash and highlight. (You can guess what colour the Austrians are going to be undercoated in).
I think unless you are superdetail whizzo expert, and are just a decentish wargaming standard painter like me then you are really wasting your time. the differences are imperceptable.
Anyway, they were blocked in with a very thin Dark Prussian Blue wash on the coats and caps, Green ochre on the packs and belts, Sunny skin tone, Black on the boots, musket and cartridge box, highlight the musket barrel etc in gunmetal, Burnt Sienna as a base for the red on collar, cuffs etc. Block in the musket wood with German cammo black brown. All the extant grey bits were just washed with a thinned black (breeches, blanket rolls). 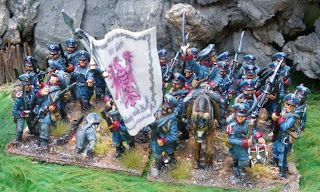 Big old flag
After that its plain sailing: wash over the Green Ochre with a Burnt umber oil wash, the flesh with an Indian red oil wash, musket strap is painted Burnt Sienna, and the musket highlighted with Leather Brown. Black bits are highlighted in German Grey. Red bits highlighted in...Red. When the oil washes are dry highlight the Burnt Umber washed Green Ochre with more Green Ochre, on the flesh more Sunny Skin tone. Grey areas are now highlighted with Neutral grey and then Neutral Grey+ white on top. Taches and hair are done with any old brown and/or grey. Brass is picked out in Brass and some Silver applied to pick out the musket lock and the musket bands.
The officers needed a few different touches, sashes were grey base coat washed black and then picked out in silver, white belts and buttons picked out in Grey White.
As I said, these figures were just washed over with a thin blue basecoat, so the pigment gathered in the folds which Calpe figures are good for. Some of them needed a second wash and I put a few highlights which were Dark prussian Blue mixed with grey, all in all the coats didn't need a lot of work to get a decent effect.
Matt Artists Varnish was slapped on. 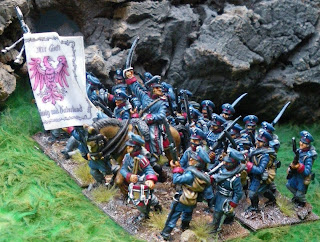 About 12 hours total time over 3 days from start to finish
One peculiar thing happened; The flag is a GMB one which I've had for a long time (at least 4 years) Normally with these I varnish them with 3 or 4 coats of GLOSS varnish to stiffen them up, and then matt them. For some reason I didn't do this, and applied the water-based Matt straight on. This has resulted in some of the original ink running on the flag, only very slightly, and its not serious. I don't know if this was a one-off, a result of using water-based Varnish, or because the flag was old...I won't be doing it again.
Figures were based up using my normal method . Calpe figures are BIG as well as lovely, and were a bit of a squeeze on the base.
Anyway, total time was 12 hours. Not bad.

16 figures: about 6 hours
Next, I moved on to the 3 infantry btns, 2 musketeer and 1 Fusileer, I've completed the first 16 musketeers which I show here: These were painted with the same method and took about 6 hours. I was reasonably pleased.
The interesting thing here was that I was much more careful with the blue wash, subsequently these figures have just had a single washcoat over the grey undercoat. Thats it. No highlighting, nothing. Looks as if I've spent weeks blending it, but actually I haven't. Saves A LOT of time. 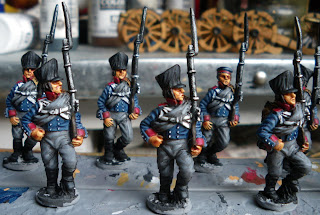 Musketeers: The blue is just a wash, no highlighting

That's a very impressive result for 'speed painting' - i wish i could paint as quickly. As for GMB - the packaging on the latest batch i got said the ink was water soluble so i guess the water based varnish was the problem. Like you i slap on a few coats of poly gloss to GMB flags - makes them bullet proof. Cheers.

Great job on these figures, I am all for speed painting. Like DC I have found the GMB inks run with matt primer, oddly enough though when I soak them in water to bend them they did not run.

I would like to be able to do 16 figures in 6 hours, definitely Calpe figures allow this.

Agreed - these are ace and, unless you'd pointed it out, I would never have thought they were "speed painted". Also, it's always a pleasure to see Calpe figures en masse - something you don't actually see that often, it seems.