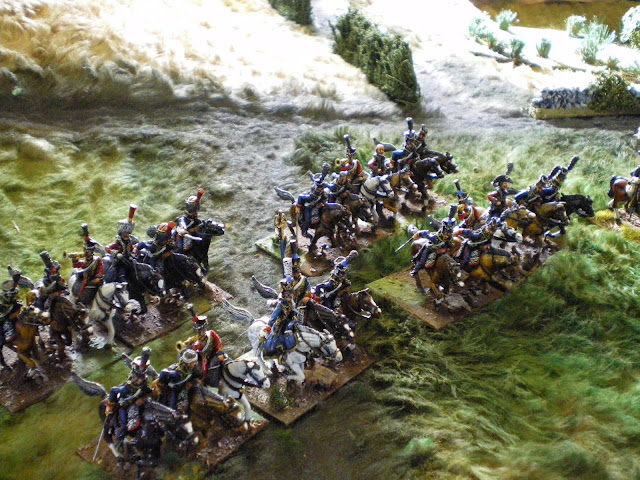 4th Hussars deploy on the Bunny-mat
Currently painting up the Wurtemburg mounted jager, which is going fine. When I have some pics I'll do a fuller piece on them.
Meantime, here's a few photographs of a favourite unit. When I was about 13, some 35 years ago(!) the first ever metal cavalry unit I bought and painted were some Minifig French Hussars. I had the old Almark painting guide which showed the uniform of the 4th regt. All that resplendant red and blue! Irresistable! I painted them up, and at the time, I thought they were the bees knees. The figures (I think) are long gone, and I didn't do too a bad job of them (my memory can be highly selective). So, a few years ago when I wanted to paint a French Hussar regt, naturally, the 4th regt were the obvious choice.
I had plenty of Connoisseur hussars but wasn't that keen on them. They are in the late cylindrical shako and I wanted the earlier, bell-top shako.This coincided with the discovery of the Firing Line range of heads, so I decided on a bit of a conversion to make up an original and unique unit. 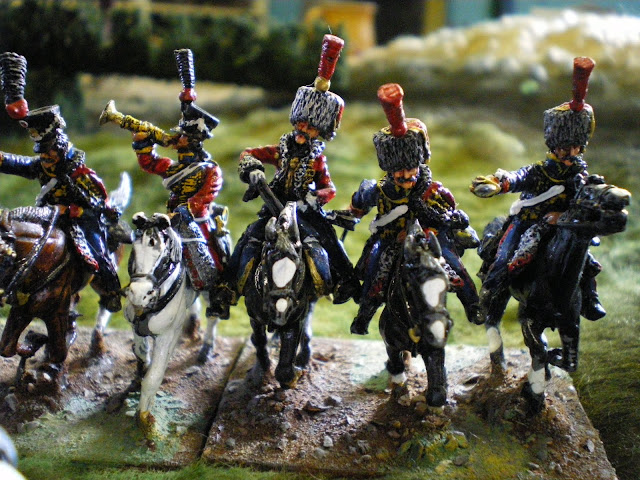 Elite coy, new heads, bent arms and drilled out sabres
There was no trumpeter for the Connoisseur Hussars (or 90% of all of PG's cavalry), so I bought 4 of the FL early French chasseurs Trumpeters and a standard bearer, they are perfect for hussars dressed just in the dolman.
The Connoisseur officer is wearing the pelisse as a jacket which is quite nice, with new heads they become all different. One in colpack for the elite coy, one in bicorne worn fore and aft, and one with a bald bare head. Suddenly 3 completely different looking figures. They are all in the pics.
For the final officer I wanted something a bit more fancy, so dug out a Connoisseur Guard Chassuer officer and gave him a big plumed shako'd head- Suddenly he became a line colonel on a grey horse. 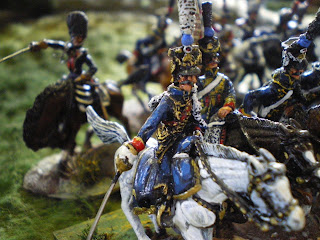 HELLO!... (I never knew Leslie Philips was a French hussar?)
The rest of the trooper figures were given plumed shakos and one with a bonnet de police, another the obligatory bandaged head. The swords on the original figures are held down, tight to the leg, so these were cut away, the arms bent out away from the body, hilts drilled out and replaced with beaten pins for sabres. They seem to get a bit more "movement" this way.
GMB as ever, provided the standard. 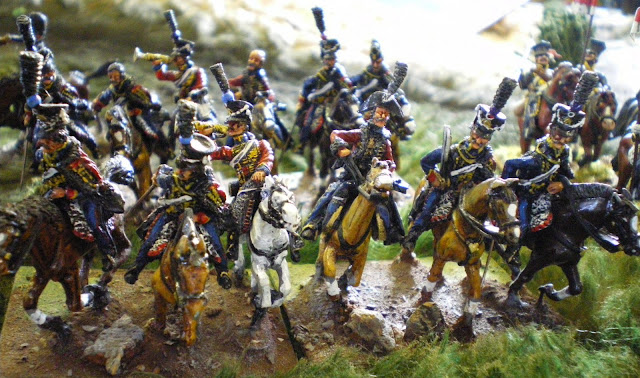 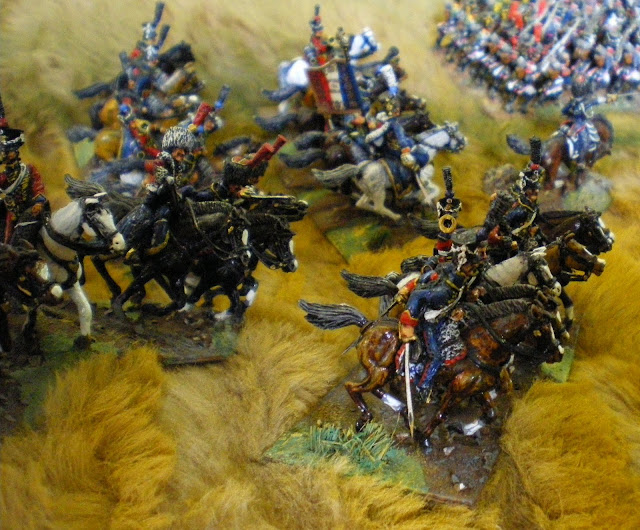 Horses are mixture of Connoissuer, FL and some Connoisuer personality horses
So, with a relatively small amount of work it's pretty easy to produce a unit which is unlike any other. Bespoke wargames figures on a budget!

I like those a lot. Really sum up hussars dont they? I must admit I am waiting for the Perry plastics to play with.

My first metal figures were Minfigs bought from a shop in Perry Bar when staying with my big brother who was at uni in Brum. Did everyone start on Minifigs?

Splendid! Incidentally a friend of mine recently did much the same thing - though greenstuff provided the head variants.

I think it must have been a legal requirement back in the '70s to start with Minifigs - i did.

Nice looking figs and paint work. The models you post always have that 'movement' that PG and PM (Elite) love to sculpt, but you seem to add even more with your conversions/bending. Excellent.

How did your WWII weekend go? Any news on the rules and their release?
Cheers,
Chris

Not happened yet, Chris. Going up this weekend. Should be good, Gerry has all manner of things up his sleeve for a 44 Italy scenario, then Vitoria afterwards.
He reckons he is aiming for publishing his WWII rules before Christmas, final proof-reading currently in progress.

What a great collection. Splendid work. I especially love the setting of your photos.