Barbarrossa Chain of Command try out at the WHC

Just spent a thoroughly enjoyable day with Mark at the WHC. We wanted to continue exploring Chain of Command, after originally thinking that when Mark puts on a weekend there it would be in 20mm. Many advantages to this,Mark has a vast 20mm collection and a huge array of beautiful bespoke buildings..but, 20mm is very small. Less of an issue maybe when you are fielding 30 or 40+ AFVs and several hundred infantry, but even for BiG Chain of Command you are only looking at having perhaps half a dozen tanks and a hundred infantry a side. It needs to be impressive in order to attract players, and the 28mm stuff is pretty awesome....Well, we thought about this, and talked long and hard...thought some more...ummed and ahhed...and have decided to go with 28mm.
Bigger.
Trouble is of course that we don't have that much stuff.
YET.
That will change very soon!
I've got enough Germans and Soviets for a decent 1 on 1 but for a multi-player weekend with up to 12 players, with 2 x 3 a side campaign games going on simultaneously we are going to need a lot more...a lot more.
Not an issue of course, any day now a MASSIVE box of kit is expected to land on Mark's doormat!
Meanwhile, the game;we just wanted an excuse for a duff-up really, get a look at terrain, have a think about size, time, space etc. Big Coc is going to be different but we can still learn quite a bit just from 1 on 1 games.
So we wanted to see how my 28mm kit looked on Mark's table (well, a little bit of Mark's table), and the answer we thought was pretty good!
When it comes to doing a full weekend the plan is to run 2 games of Big CoC side by side, each on a 12' x 6' table, but for today we were just using a mere 6'x 6'

Above is the view of the battlefield from the Soviet side. The bombed out sewing machine factory complex  dominates the surrounding countryside of fields. We were playing a pick up 1941 attack/defend scenario with a 4 section German infantry platoon on the attack, supported by a Panzer 38T, an MG34 MMG, and the Germans benefited from a preliminary artillery bombardment which severely hampered the deployment of the Soviets, who were defending with a big 4 section rifle platoon, supported by a 45mm ATG. Force morales were equal on a 9. There followed a tense patrol phase 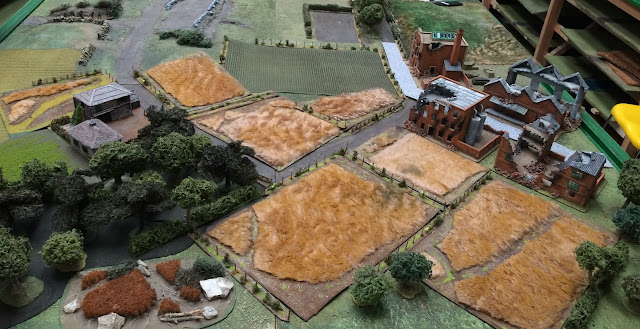 The view from the southern edge, the farm and woodland was a priority for the Germans during the patrol phase, the fields were deemed to be light cover for infantry in them if observed from the flat, but no cover from troops at higher elevations in the factory or on the rises in the NW and NE corners of the table. The fences were light cover but didn't block LOS (unless you looked through 3 of them). Mark ended with JOP tucked behind the wall in the very top of the picture, one behind the little house next to the wood, and another in the farmyard. I managed to constrict him so was fairly pleased 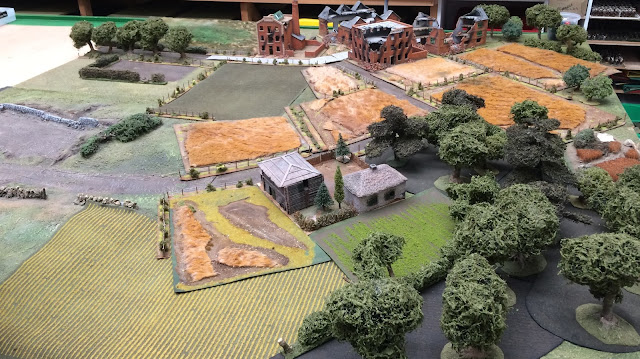 a view from the German side, good approaches and JOP positions, but difficult open countryside to negotiate in order to get into the factory area 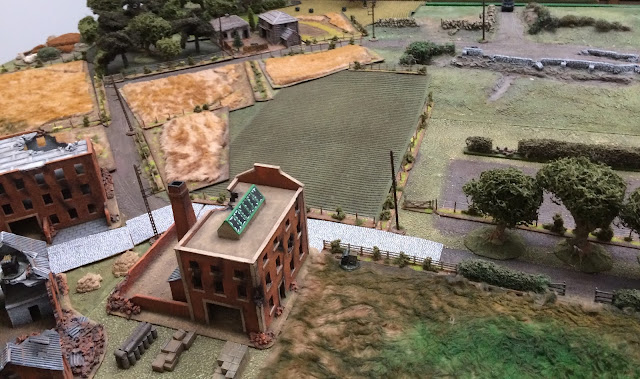 another view from the Soviet side, 2 of my JOP's are visible 1 bottom left in the bombed out roof and another in the field next to the road and the factory. A third was just out of shot on the left in amongst the fields, but with a somewhat obscured view of the road running back to the German side 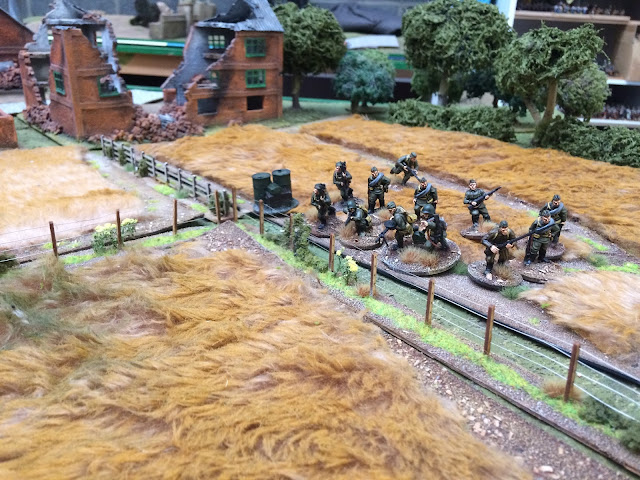 Above is the 3rd Soviet JOP with my first deployment, a section hunkering down in the wheat behind the fence line. 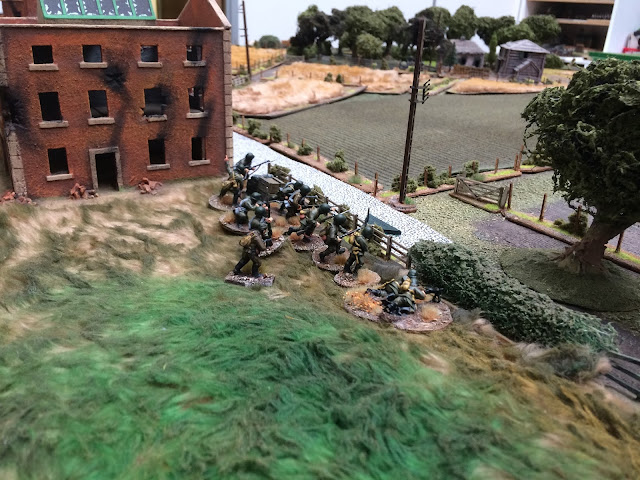 The second Soviet deployment, a section tucked in with views over the fields. Why I put it there, I've no idea....should have deployed into the factory, not the field. I think my original intention was to push forwards into the trees, but I never even got started. A heavy crossfire from the front and an MMG in the farm whittled them down, eventually I pulled them into the factory but they were still exposed and took terrible fire.
By having a good look at Mark's 20mm buildings,there are plenty that are perfectly good for 28mm games. Personally I've always found that a lot of 28mm WWII buildings look enormous when they get on the table, but these factory buildings are a really good size even for 28mm, as are the 20mm farm buildings in the picture below. 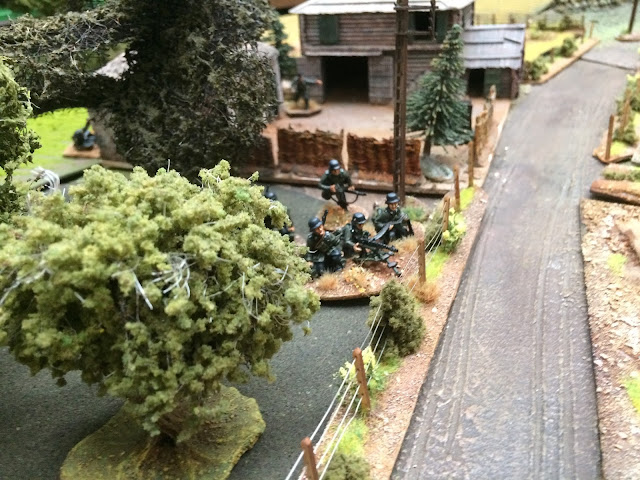 Joined by a German section in a deep ditch over-looking the fields, the 2 together put down a crossfire on the hapless Soviet section. 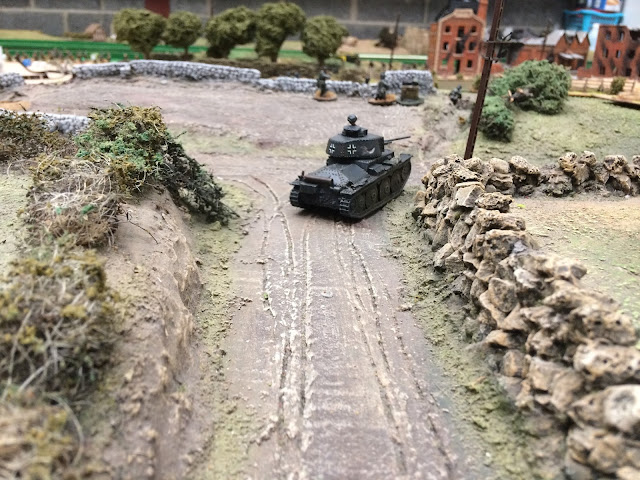 A 38T moves up. Ahead of it is the German section in the ditch which is on the other side of the wall. 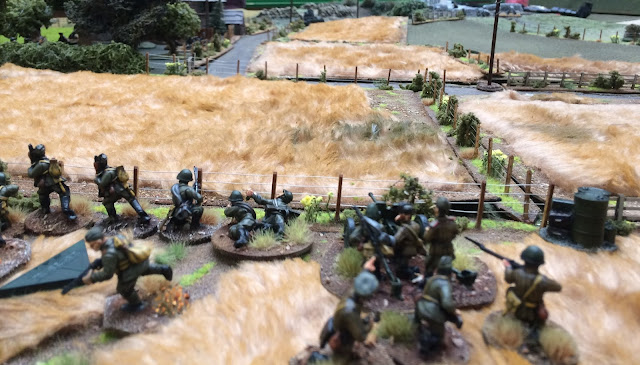 Way off in the distance, the 38T is spotted! A 45mm ATG deploys in the southern field alongside the first rifle section plus the platoon mortar. It opened up, missed and continued pumping shells at the tank. On the 3rd attempt it immobilised it, but the tank kept firing. Finally the 45mm fired and rolled a double 6 to hit! Weak spot! resulting in a KO. The tank didn't explode but it was silenced permanently. 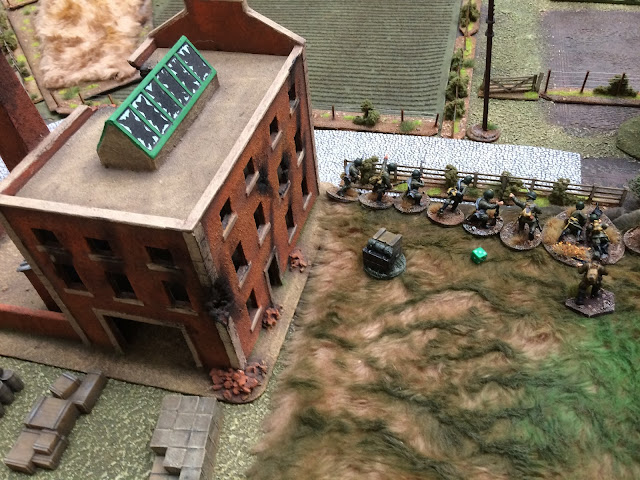 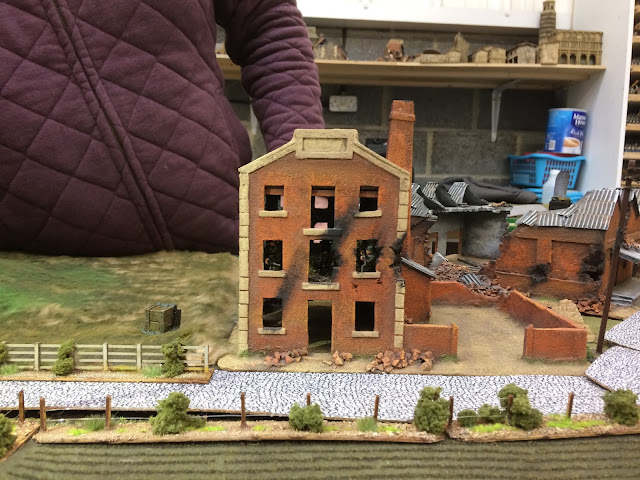 eventually it gets the message and retires into the adjacent building.....where it should have been in the first place! 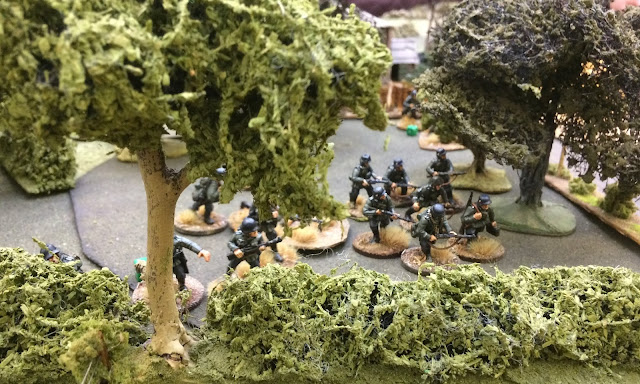 German section moves up through the wood to engage the section in the southern field. 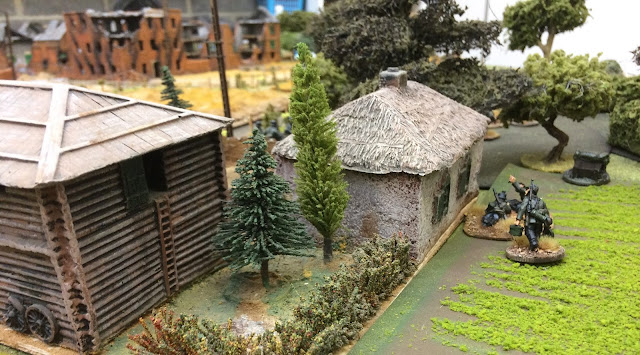 Behind the section, is the JOP and the platoon mortar giving occasional supporting fire 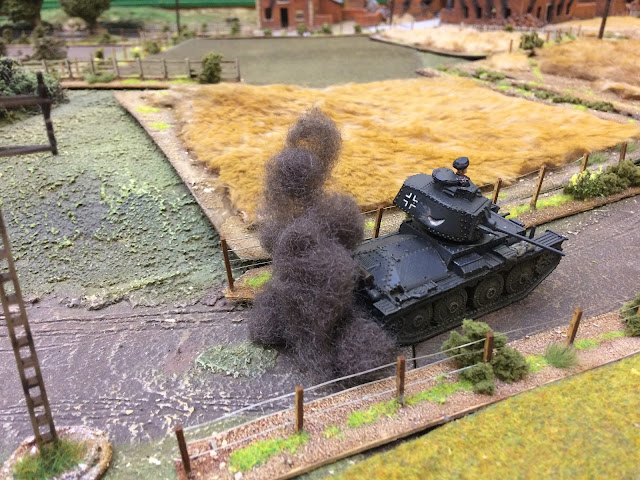 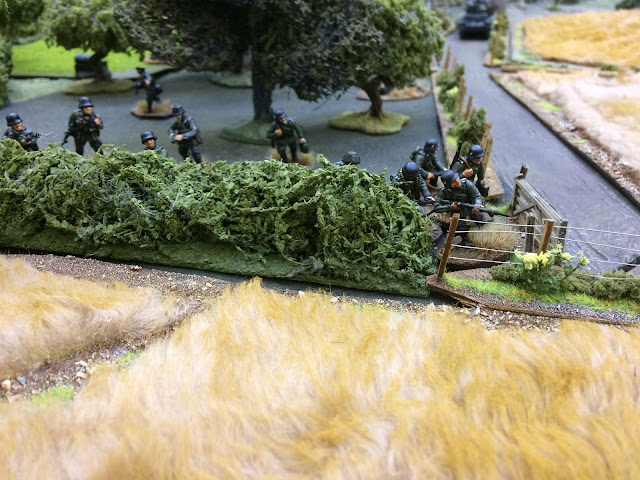 Having reached the edge of the woods the German section trades fire with the Russians, and starts  to come off worst. Another section is sent out to reinforce..eventually this gives the Germans  the upper hand.

The section in the ditch continues to lay down fire on the section the factory, which ended the game with a single LMG gunner and its corporal! 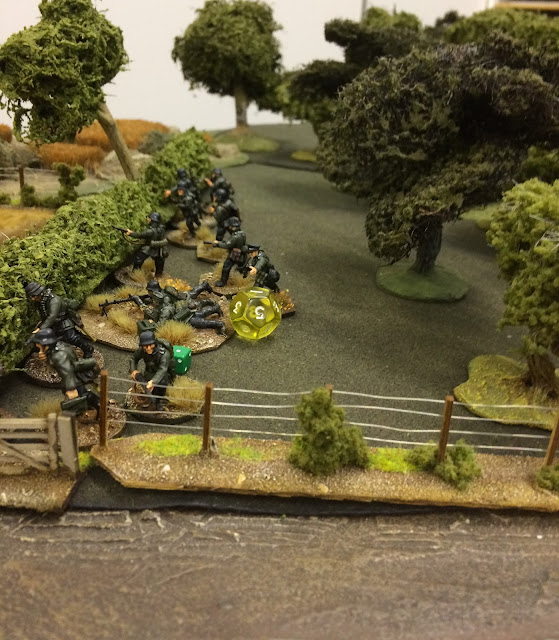 Casualties mount in the wood, but the Germans hold firm 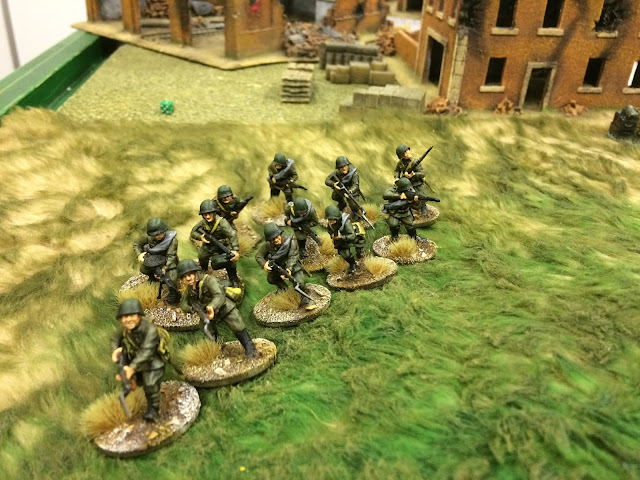 A third Russian section is deployed out on the right and attempts to flank right, but it is too late... 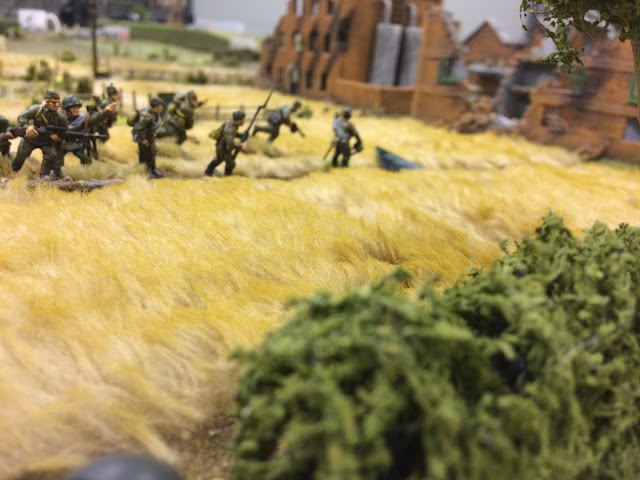 In the field the mortar and the ATG have been shot down, and the section has lost a few men..I think its time to scuttle back into the factory, by this time my FM was down to 3, and was going to get worse - the Germans were still on 5 or 6. I threw in the towel. 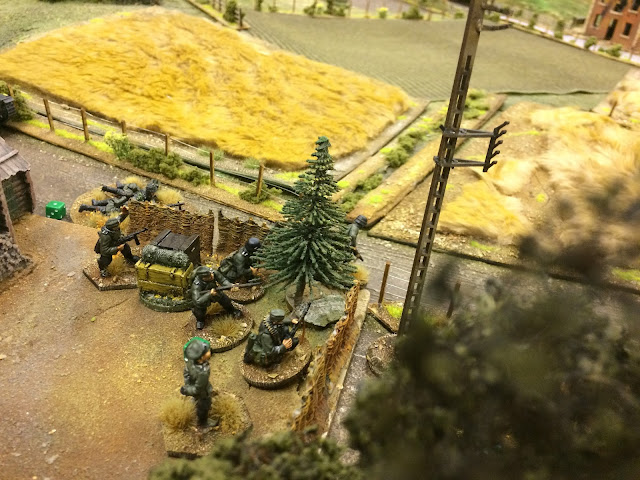 A fun game, even though it degenerated into a firefight which the Soviets lost. They gave a lot back, but the Germans were more flexible, took the lumps on their core sections rather than having a lot of support teams completely wiped out which hurt the Soviet FM.
The big problem was that my plan was utter rubbish. I just shouldn't have done what I did. I had a fabulous defensive position, high buildings overlooking open fields! So what do I do? try and push out of them....(FFS!) Idiocy!
My reasoning (poor as it was) was influenced by falling into the CoC "psychological tank trap". I became obsessed by the idea of getting the ATG out where it could cover the road any German armour would need to approach from. Subsequently I had to commit to protect it, more and more kit gets sucked in....etc.
There was absolutely no need fro me to do this! I Should have just hunkered down in the factory. Not bought much on at all, rattled through the phases (which would speed up the turn end and finish the barrage), and I could have got some CoC die. Meanwhile the Germans would have to come on and eventually get caught in the open in the fields. But no....Really stupid play on my part. Meanwhile Mark cheerfully shot me to bits! (but he did it very nicely, and, most important of all, we had a great time!
Posted by Chris Cornwell at 1/06/2018 12:04:00 am

JimBob, you can follow more of MArk's stuff here