I've been terribly busy with work so the painting total for May has been truly pathetic, just 20 figures finished for the entire month. Quite appalling. I might get a few more in before the end of the month, but maybe not.
I like to get in a little painting session most mornings before I head off, just 15 or 20 minutes, you know, cup of tea, bit of quiet morning radio. You
can't actually get a massive amount done but it adds up. Anyway, this past month I've been leaving an hour or so earlier, so no chance of getting anything done, and in the evenings I'm too knackered.
Thought though, can take less energy, and I've been thinking about artillery in ITGM.
This was prompted by something in Noel's blog  http://garagegamer.blogspot.com/  where he mentioned they were playing a game using smaller sized gun batteries. I've done this a few times, where normal battery sizes are reduced by one gun, and its usually resulted in an excellent game. 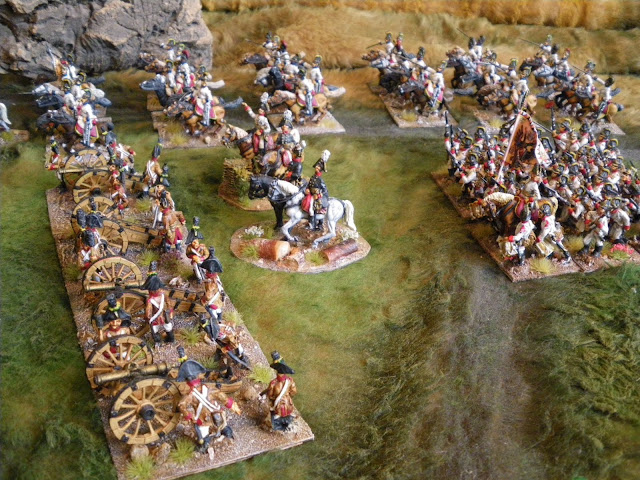 Austrian 6lb battery: This could go down to a 3 gun battery
So, thinking about this leads to possibly expanding some rule changes to go along with this reduction.
I've always resisted tinkering with ITGM, its always seemed a case of "its not broke, so why fix it?" and to a certain extent I still adhere to that. Whatever set of rules, whatever period, there are ALWAYS knock-on effects from even the tiniest rule change. As long as these are foreseen then all well and good, but they often aren't. However, I think I can say I'm probably as familar with ITGM as much as anyone so I reckon I can cover most eventualities.
If we reduce battery sizes (4 gun down to 3, 3 gun down to2 and 6 gun down to 4) then obviously this will reduce the effectiveness of artillery on the battlefield (and I can already hear the Russian players squealing in protest). This needn't be the case. To compensate for reducing battery sizes one simply increases the number of batteries. Whats the point? I hear you say? It means individual batteries are not so powerful, are not quite so immune to enemy action, and would need to be sited more carefully and protected by infantry, cavalry or terrain.
There are a few other rule changes concerning artillery I'd like to throw into the mix while we are about it.
Horse artilley fire twice in a turn if stationary.
Why?
I've never read anything that supports the notion that horse gunners employed a higher rate of fire. I HAVE heard that when PG originally wrote the rules he lacked horse batteries so made the few he did have more effective.
So I'd do away with that rule. With most horse bttys now being only 2 guns (except Russian and Prussian which would be 3) it would make them less devastating. At the moment there is a tendency in games not to have that many of them. I think I'd sooner see more small battys than the occasional larger one. 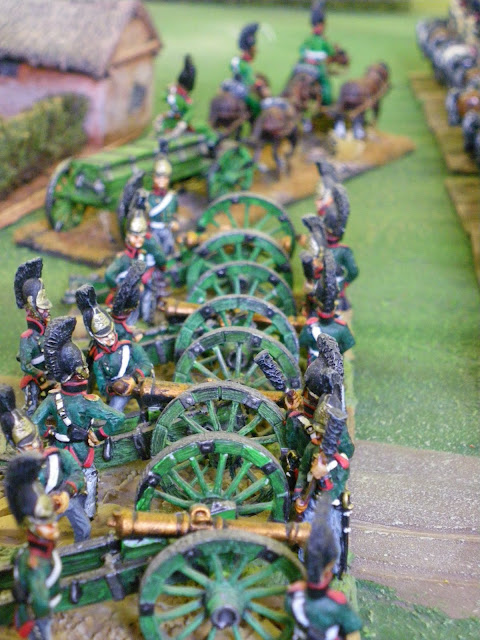 Russian horse guns: Not so fearsome if there were only 3 guns and they fired just the once per turn
(from J.Lander's collection)
The benefit of having 2 gun bttys means that their frontage is less than a 6 man cavalry squadron, so providing they are anchored on terrain, or other troops then they can't easily be charged. They are however quite vulnerable to counter-battery fire..but it would be the same for both sides.
Another rule I would do away with is firing guns overhead (as opposed to howitzers) from the flat up onto hills and vice-versa. It didn't seem to happen much from what I can gather. No problem with firing over friendlies from hill to hill. 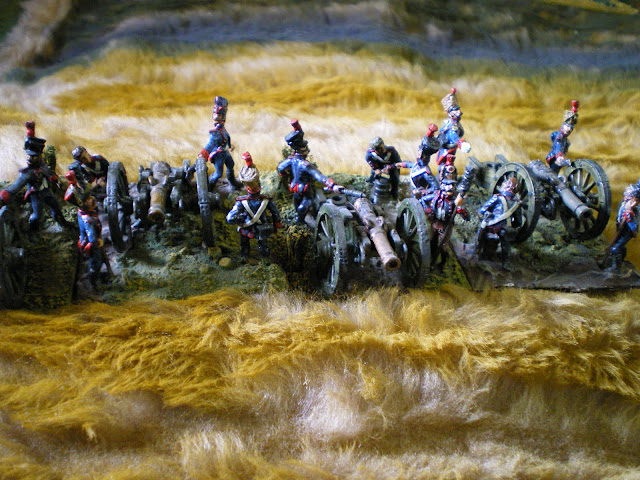 French foot artillery: Connoissuer figures
Lastly, there is the minus 4 incurred by guns firing cannister at single rank cavalry. Noel is convinced this is a misprint which has been followed by convention for years.
If one reduces the battery sizes, and does away with the minus 4 against single rank cavalry then it actually ends up about even (the guns might be a little ahead) when you look at the fire tables.
So, those would be my changes.
Incidental problems would be to do with the possibility of more formations with muliple bttys which would lead to more Grand bttys and convergence of fire. Therefore care would have to be employed in how you construct OB's.
Take a "typical" game.
lets say currently you have 3 corps, each  of 10 btns and a cavalry regt each with a 4 gun btty. Plus a reserve btty of 4 guns. You also have a cavalry corps with a 3 gun horse btty
A total of 19 artillery models. If one reduced the btty sizes this would go down to just 14 models.
This may not be desirable. How to solve this? Giving extra bttys to formations willy-nilly might not be the answer because one increases the ability for units to converge fire. One solution could be in this instance to fiddle about with the poundage, ie allow some or all of the guns to be 12 pdrs, or one could perhaps give the cavalry corps 2 x 2 gun bttys. Or one could give some of the infantry outfits additional 2 gun horse btty's to accompany their inherent cavalry, and introduce a another rule forbidding convergance fire between horse and foot from the same formation.
Just a few thoughts.

A few thoughts on the proposed rule changes though it's probably more practcal to discuss them on the ITGM yahoo group. Firstly, we've just started a new campaign using the reduced batteries system and it seems to be working well enough. Though to be honest we haven't felt the need to increase the number of batteries yet. Secondly, we haven't allowed Horse guns to fire twice for a long time now. As you say there's no real reason for it though if I remember correctly all 6lb'ers used to fire twice in the original rules.
last, oddly enough i had the discussion about overhead firing with Mike Ingham a few weeks ago and his thoughts were to allow it as long as friendly troops were closer to the firing battery than they were to the enemy.
All good points, though I look forward to the howls of protest on the Yahoo group.

all the above comments look good if you - i know how some folks hate this use historical OB's or a point system for so many guns per troop points also I read somewhere an historical acount of a battery or several batteries of french artillery actually "charging" ie they fired moved forward fired again and moved forward again and fired again. I am not sure where I read it. But they idea really intrigued me.

Yes artillery in this system is particularly devastating. the only other way to change this would be to add a couple of rules like the cannister fire only if charged and an effective range chart like for musketry, based on the morale of the battery - this would mean adding three ranges for cannister or maybe two long range, effective range and then devastating fire

I've used "cannister only when charged" a couple of times (WHC uses it for the Dresden game) and frankly, I think its awful. Makes infantry and cavalry not really that bothered at all about getting up real close to the guns. Also creates a gimmick whereby you just advance skirmishers up into range of the batteries and mow down the gunners, whereas previously they would be cannistered into next week

I agree with the point about defensive cannister only. We've tried it a couple of times and people always take advantage of it.

I agree with what you guys say about the defensive canister - isn't it always the case though that some bugger will try and exploit any minor tweek in the rules to their own advantage? Human nature I suppose but not very sportsmanlike. Love your Russian Horse arty Chris - got a battery of the FR ones meself - one of their better sets IMO. Russian batteries in most rules are huge - 6 guns - to reflect the historically larger batteries. But as discussed, it does tend to dominate the table wherever they're placed and make for unbalanced gameplay. I've gone very unhistorical and cut them down to 4 or two of three guns each. Seems to work much better in practice.

Noticed your very attractive Austrian battery of 4 guns that you plan to reduce to 3 for gaming. The Austrians were actually underpowered in their artillery - less powder in the casing - so that it took 4 Austrian guns to be as effective as 3 French guns of the same caliber.

Dunno how you'd reflect that on the table as I haven't heard of any rule set that takes it into account anyway.

If you could hold the discussion on the ITGM Yahoo group, I'll get stuck in.

And for theguy who asked previously, the WWII rules are done and will be published later this year, avaialble from me to begin with.

I'm the 'guy' and thanks for the news. As I have noted before, I have been looking for a fast play WWII rule set that is designed for 20mm models and has a consistent design model. I have no idea if your rules will satisfy that, but I am very interested in them. I have played RF (and helped edit the second edition). I found that the chart heavy nature of the game and the inconsistent concept (which is by design) pushed me away from the game. I am playing BKCII at the moment. I like the relatively consistent design concept, but am frustrated by the need to write houserules to cover design gaps. Also, in 20mm it is being stretched a little beyond its intent.

So, I am absolutely delighted to hear that you have something coming down the pike. If you need some further editing help or feedback, I have done such work for Arty Conliffe and others for years. My email is cleach@sfu.ca if you are interested.

Gilder also had horse artillery firing twice in his pre 'Grand Manner' rules (the set he was using in the late 70s). His reasoning was that they could be reloaded quicker. No, i don't really buy it either, but there you go.....
Cheers.