bits and pieces on an idle saturday 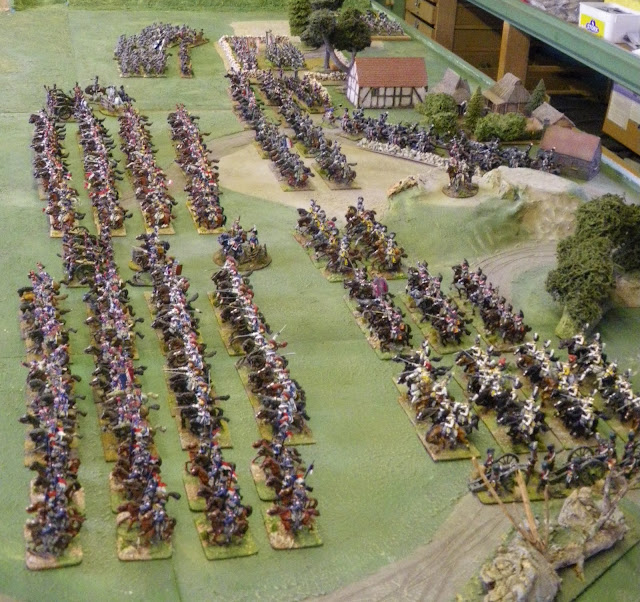 Massed French Cavalry: 3 Cuiraissier regts, 1 Carabinier, 2 Polish Lancer, 1 Polish Cuirassier, the Zastrows, Westphalian Guard Du Corps, 3 chassuer regts all supported by 4 Horse batteries
- All from mine and John Lander's collections.
Been a busy week, for a multiplicity of reasons, work plus I was away for a long weekend. I only mention this because the proposed house move (its been proposed for at least 10 years) may actually be taking shape. While I was away we found a property which sort of ticks all the boxes (there are a lot of them to tick). However, amidst all the discussion of domestic arrangements there was only one thing I was actually focusing on, which was the early comment made by my missus, while looking at the 2 outbuildings, which was "Of course, you'd better have the bigger one".....
We'll see...Long way to go yet, I don't even know for sure if the owner wishes to sell (its unoccupied).
Meanwhile, the Hungarians are getting a bit of attention, might finish them this weekend. Not mad keen on how they have turned out, no idea why, it might just be the figures.
Next up will be another helmeted unit, followed by artillery, which will give me a small corps of sorts, 6 btns, skirmishers and artillery. Enough to tack on to some Prussians or Russians for a game.
Whilst at John's the other week we did talk about expanding my Austrians....via a purchase...watch this space.
So for a diversion; a few pics of some French cavalry, a big old Cavalry Corps, (well, more like 2 really) with 7 armoured regts, 2 lancer, 3 light and 12 guns. 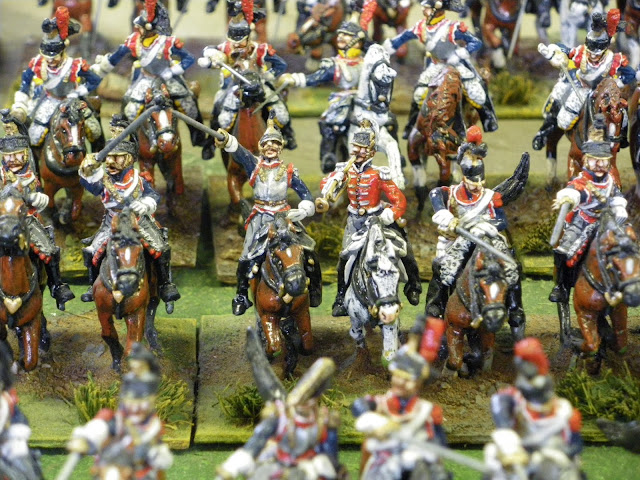 A good mix: Back rank (yellow facings) Connoissuer figures. Middle rank(red facings) Old Glory, Willie figures officer and trumpeter (a FANTASTIC figure) and Foremost. Front rank (blurry) Old Glory,and Foremost.
Not  a bad turn out. John and I have a decent amount of French heavy cavalry apart from dragoons of which we only have 2 - there are a couple more lancer regts knocking around, plus several light regts of French and allies. Believe it or not, I would actually like at least 1 more French Cuirassier regt, if for no other reason than  because 3 is such a rubbish number. One day. 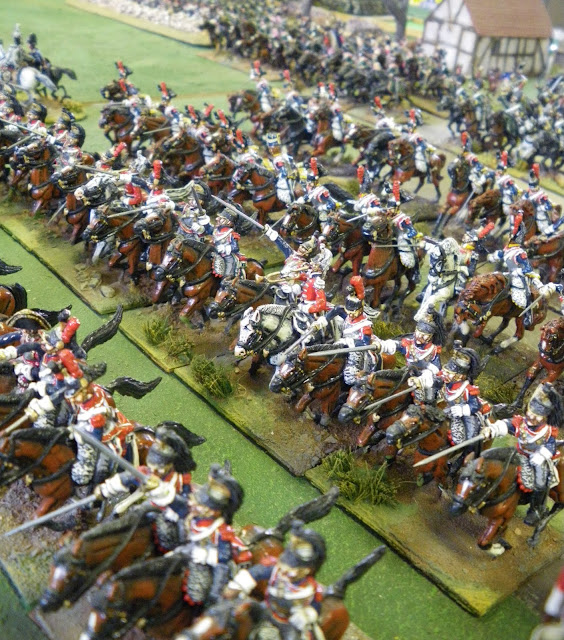 2 of the French armoured regts, both painted by the late Ian Stables

That's a very impressive amount of heavy cavalry - I would think the table would shake a good bit as those heavies thunder down upon their targets. Here I was thinking that my measly heavy cavalry units of 24-28 figures were a bit too big.

I agree - very impressive. Nothing like a lot of well painted figures on the table; and with Napoleonic cavalry even more so. Dean

What manifacture are the Cuirassier nearer the camera shot in the main picture, they look like french, I was only wondering because the horses looked really well posed and proportioned.

Ahhhh I believe they are Polish, there's only 24 and the crimson flag is a bit of a give away!

Who's manufacture are they though?

Well done Mark! They are indeed Polish, one of Mr Lander's efforts..incredibly, the figures and the horses are Old Glory...the heads are a bit big on the figs but they are nice enough.

The riders might be OG, but I am pretty sure that at least some of the horses are Connoisseur and perhaps Bicorne...

I must say that I was pleased to see how nicely the OG cuirassier figures fit in.

How are those Austrians coming?

Dare I ask about WWII rules?!

I can't remember what the horses are, probably a mix of Connoisseur, OG, Firing Line, and maybe Elite. Definitely no Bicorne in there.
Austrians are going at a decent pace. I'm half way through the 6th 48 man btn, which is well on target.
I'm going to see Gerry for a WWII game in about a week, the rules are done, but he seems to have put publishing on a back-burner for a bit.
I know he's got a lot going on one way and another at the moment but I'm sure he will have an update.

Thanks, Chris. Sorry to bug you about the WWII rules but this has been a struggle for me for some time. RF has not worked for me and I am not interested in skirmish gaming. So I end up using other rules not really designed for 20mm. I am using BKCII and it is working quite well, but has not caught on with my group (about 12 guys). So I still look for that 'right' mix of feel and playability on a somewhat larger scale than skirmish. RF actually has the right size of game we want, but the peculiar mix of skirmish rules and higher level abstractions leaves us frustrated by it.

If Gerry needs some playtesting done on his game I would be glad to offer my group's services. We have playtested for many other rule systems including most of Arty Conliffe's games and a couple of my own (most notably Battles for Empire I and II colonials, and Shako II).